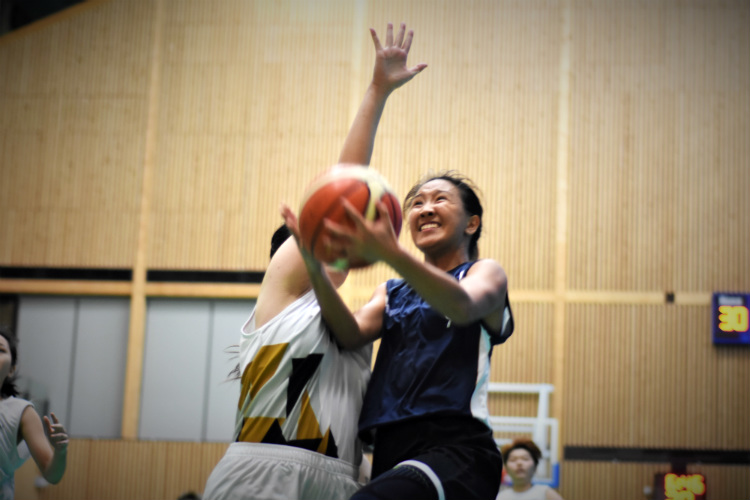 The Wave, Nanyang Technological University, Friday, September 20, 2019 — Amidst tight contest for most of the game, Singapore Management University (SMU) managed to step up and pull away from the competition, beating Singapore Institute of Management (SIM) 58-46 to clinch their first SuniG win this season.

SIM secured the first possession after tip off, where Hui Min (SIM #21) found her way easily through the bewildered SMU defence for the first bucket. Both teams went neck to neck on a low scoring affair as their offence were unable to find the bottom of the net.

This was until SMU managed to pull ahead with a trey by Sara Tan (SMU #7) combined with and-one plays by both Cheryl Eio (SMU #77) and Qi Hui (SMU #10), putting SMU ahead at 12-4 before SIM called for a timeout.

Whilst SIM answered with a 3-point shot through Hui Min (SIM #21) after the timeout, SMU continued their offensive rhythm through Jia Xuan (SMU #6) who converted a free throw and a midrange jumper to end the quarter with a 15-7 lead.

The second quarter saw a back and forth scoring between both SIM and SMU that allowed SMU to maintain their lead. However, SMU got into foul trouble early which gave the SIM offence the advantage to execute more aggressive plays.

Setting up a full court defence set play on top of their aggressive offence, SIM managed to deflate the deficit by forcing SMU turnovers and to convert on the free-throw line. 10 of their 21 points scored were from free-throws. They managed to tie the game 29-29 to end the second quarter.

A back to back scoring effort by Sophia Isabelle Ang (SMU #9) gave SMU the lead once more to start the 3rd quarter. Fouled on her 3-point shot, she managed to convert into a 4-point play. Coupled with her previous offensive put back, SMU managed to gain a 6-point lead at 35-29.

Shirley Long (SIM #13) managed to score 6 of her team’s 9 points in the third quarter to keep SIM in the game, as she hustled hard with her post moves through the SMU defence. The quarter ended with SIM being slightly behind at 38-41.

SMU would set up a full court press in the final quarter which allowed them to extend their lead through numerous fast break points. Sara Tan (SMU #7) led the charge in their fast breaks, clinching points for herself as well as assisting Wen Ruey (SMU #25) to score. Against the robust defence, SIM were unable to organize their offence and this allowed SMU to seal the 58-46 win.

On their offence, Captain Ren Qi (SIM #9) commented, “I think our attacking was too passive, we could be more active, and our rebounds can be better.” She hopes that her team fights hard to get into the top 3 for SUniG.

When interviewed about the win, Captain Sara Tan (SMU #7) stated, “The team worked hard and there is more to come, we will put in more effort”. Co Captain Sophia Isabelle Ang (SMU#9) chimed in, “The win was a morale booster and it serves as a motivation. We hope to win the upcoming matches and get into IVP”

SIM will take on Singapore Institute of Technology (SIT) next on 27 September, whilst SMU will be scheduled against National University of Singapore (NUS) on 30 September for their next SUniG game.