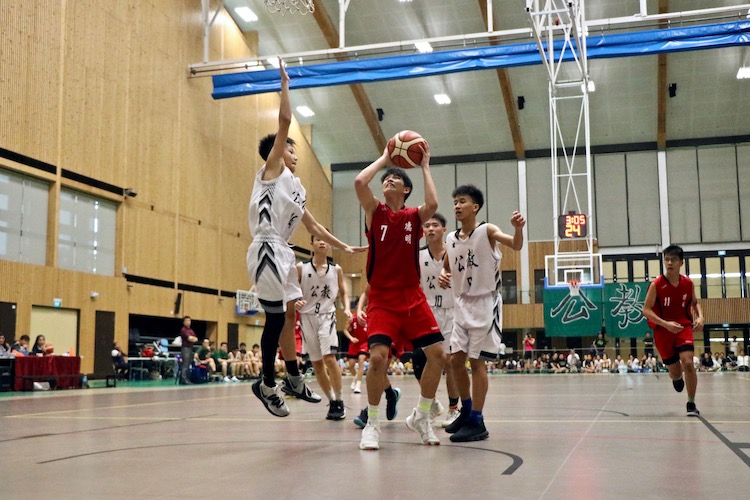 DSS secured the first possession after tip-off. However, both teams did not manage to convert in their initial possessions due to multiple turnovers. Three minutes into the quarter, Jayson Tan (DSS #7) opened the scoreboard with a teardrop that followed his offensive rebound. This was immediately answered at the other end with Yu Jun’s (CHS #9) drive into the DSS defence. With an even score line, the combined effort of Jayson (DSS #7) and Chee Kiat (DSS #8) put DSS ahead at 10-5 to end the quarter.

Both CHS and DSS picked up momentum in the second quarter as they put up points for their teams. A jumper by Yi Heng (CHS #10) and a 3-point shot by Zhiyi (CHS #12) narrowed the CHS deficit, but DSS did not settle and put in points of their own, where the chemistry between Jayson (DSS #7), Chee Kiat (DSS #8) and Jun Hao (DSS #10) gave DSS 9 points of their own, allowing them to maintain a 19-10 lead.

CHS proceeded to commit a full court press defence, putting a stop to DHS’s offensive momentum. Yi Heng (CHS #10) dropped the crucial back to back points off a fast break transition and a steal to convert, putting CHS just two points short of DHS at 17-19. CHS took the lead later in the quarter at 22-21 where Yu Jun (CHS #9) drove through traffic to convert. Gavin Tan (CHS #6) would extend the lead to 24-21 with his reverse layup but Jayson (DSS #7) would equalize with a 3-point shot to end the quarter.

Commenting on his crucial points, Yi Heng (CHS #10) divulged, “When Coach had the time out, he told me to take the lead and help the team. That’s what I did, to give all out and play aggressive on both ends which allowed me to score those points”.

Facing multiple travelling violations, CHS were unable to build their tempo in offence early in the 3rd quarter. DSS were also unable to convert as their slashes did not hit the mark. However, these slashes by DSS put CHS into foul trouble early within five minutes of the quarter.

Whilst CHS took a single point lead (31-30) with Zhiyi’s (CHS #12) 3-point shot, DSS took advantage of CHS’s foul trouble and increased their aggression, taking back the lead and extending it to 43-33. Jayson (DSS #7) was pivotal in creating this lead with his successive eight points that fired up the team.

In the final quarter, CHS’s attempt to close the gap was stopped by a robust DSS defence. DSS continued their tempo with Jayson (DSS #7) at the helm playmaking. Fatigue soon overwhelmed CHS as they were unable to put up much resistance to the intense DSS offence, and DSS would seal their championship title with a 68-43 win.

“We started well and made it a close game in the 1st half. However, in the 2nd half, fatigue took over and we had unnecessary fouls as well as lost the momentum not being able to fight back “commented Yi Heng (CHS #10) about the loss.

On his thoughts for the championship win, Jayson (DSS #7) stated, “I’m grateful for my teammates, we put in hard work and had the mental strength, never gave up. This is my 1st time winning the championship so I’m a little emotional. I would also like to thank the bench for their support and I’m very proud of the team.”

This game marks the end of the National C Division Basketball Championships 2019.