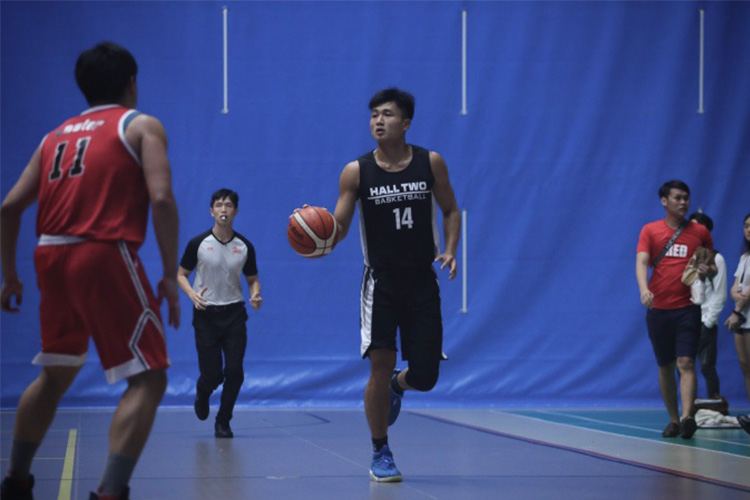 “Even though we clinched our three-peat last year, we did not get complacent and still trained hard, remaining hungry for another championship title,” captain Ang Jia Le (Hall 2 #17) said.

It was a neck-and-neck game in the early minutes as Cheong Rong Hao (Hall 2 #13) and Lyon Chia (Hall 2 #14) got into tempo quickly and contributed 14 points in the first quarter, whereas Hall 10 had Sergul Toh (Hall 10 #5) who was relentless in the post and posing much trouble for the Hall 2 defence. The first quarter ended with Hall 2 having a slight edge at 19-13.

Sergul Toh (Hall 10 #5) ended the scoring drought with an offensive putback. However, they did not manage to contain Hall 2 as the quarter ended with Hall 2 being ahead at 48-33.

The third quarter started off sluggish for both teams as they could not convert their attempts. Halfway through, Hall 2 started to pick up momentum via transition plays as their defence stifled their opponents. Even so, Hall 2 also committed a few turnovers which Hall 10 capitalised on. With hot hands to wrap up the quarter, Lyon Chia (Hall 2 #14) and Brian Wong (Hall 2 #11) hit a trey each to put Hall 2 comfortably in front at 68-41.

With the Hall 10 starters being worn out by the earlier quarters, Hall 2 decided to field in their reserves for most of the final quarter. They did a good job with defence and managed to keep Hall 10 at bay. The game ended with Hall 2 securing the IHG championship once again with a convincing 78-55 win.

Reflecting on the game, captain Keane Sim (Hall 10 #30) shared: “We knew we were going against a powerhouse in Hall 2, so we had a mindset where we went all out and had nothing to lose.”

He added: “For us to get this far with this squad and especially with juniors that just got started into the game, I’m very proud of them.”

Captain Jia Le (Hall 2 #17) commented: “I’m very happy that we won. We were really hungry and I’m glad we got what we came for.”

When asked about defending the championship title once more, he replied: “We don’t know for sure, but I feel that we must keep the tradition and remain powerhouses of IHG basketball.”