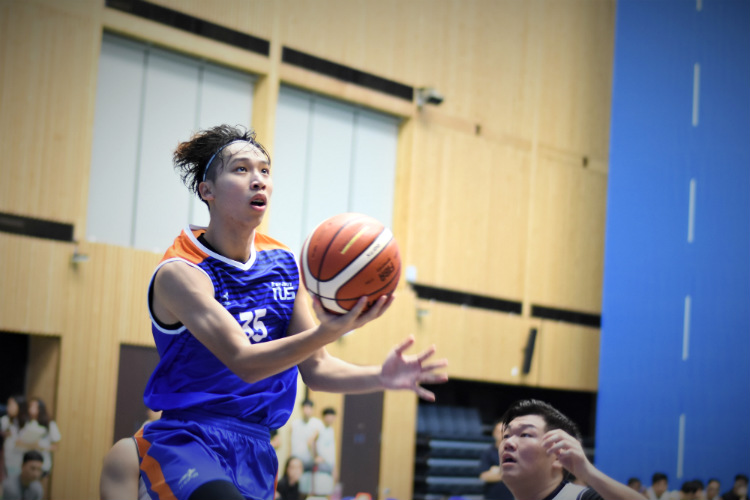 The Wave, Nanyang Technological University, Friday, September 20, 2019 — With their steady set plays and effective on court communication, National University of Singapore (NUS) managed to triumph against Singapore Management University (SMU) in a bid to defend their SUniG championship from the last season.

As their lead diminished, the NUS offence picked up their tempo through a Kevin Han (NUS #2) trifecta and with a tight defence, they managed to keep SMU’s offence at bay and close the quarter 18-10 with a trey from Jovi Lim (NUS #35).

Facing a robust NUS defence in the second quarter, SMU were unable to convert and had a scoring drought early in the quarter. NUS would take the opportunity and extend their lead through turnovers and Fastbreak plays, putting them up at 27-10 before Tan Howard (SMU #14) ended the drought with a 3-point shot.

SMU would suffer on both rebounding ends as Arno Ricou(NUS #7) had the clear height advantage, together with NUS’s aggression in crashing the boards. Whilst SMU continued putting up threes beyond the arc through Hammond Lek (SMU #7), Ka Jin (SMU #8) and Shaun Lim (SMU#11), NUS were able to widen the score gap as they ended the quarter 41-22 with an and-one play by Kai Yuan (NUS #15).

The first bucket of the third quarter would come through a NUS baseline inbound pass to Jovi Lim (NUS #35) whom laid the ball in through traffic. Although SMU attempted to pick up their offence through Wayne Goh (SMU #0) who pushed his way into a tough NUS defence to net 4 points, a stellar shooting by NUS saw them scoring effortlessly beyond the arc, with Jovi Lim (NUS #35) nailing back to back treys.
Hammond Lek (SMU #7) attempted to organize the offence and answered with a trey of his own, but they were unable to deny NUS as they stretched the lead further to 69-41.

A barrage of treys from both NUS and SMU started the final quarter as Gideon Wong (NUS #30) would hit three consecutive 3-point shots off the bench and SMU hit their treys through Tan Howard (SMU #14) and Nelvin Tay (SMU #1). Jovi Lim (NUS #35) would continue his hot hand streak and convert 2 more trifectas and gave NUS the comfortable 87-56 win.

Reflecting on the loss, Captain Hammond Lek (SMU #7) commented, “We played well as a team despite a few lapses. We lost because NUS had the higher percentages, it was a good fight with them until they pulled apart in the third quarter.”

Captain Kevin Han (NUS #2) shared, “We are really like a family and we play as a team, supporting and encouraging each other. We want to stay focused and defend our SUniG championship title this year.”

SMU will play against Singapore University of Social Sciences on 27 September, whilst SUniG defending champions NUS will face off against Nanyang Technological University (NTU) on 25 September.