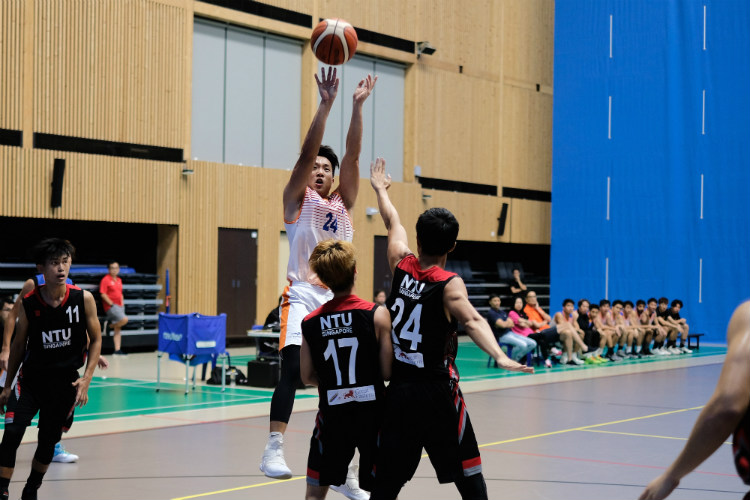 NUS captain, Kevin Han (NUS #2), said, “NTU is really a very strong team and they were going hard against us from the start. However, I know that our team has been practicing and training very hard. So far, throughout this season, we have been having good starts to our games. So for this, I told them that even if we are losing from the start, don’t ever give up, just keep encouraging each other and continue to fight these small battles. I am very proud of us.”

Both teams came out strong from the start. Liau Ming Shun (NTU #11) drew the foul and was able to convert the free-throws but Arno Paulus Didier Ricou (NUS #7) quickly answered with four quick points. Unfazed, NTU held their ground and scored as well. It was a see-saw battle but NUS were able to hit their outside shots to lead 22-18 after the first quarter.

Drawing on the momentum gained from the first quarter, Leong Kai Yuan (NUS #15) made a strong center move to kick off the second quarter. Kai Yuan (NUS #15) provided a spark off the bench with eight points. He drew cheers from both the NUS bench and crowd whenever he scored, boosting the morale of the NUS team.

NUS capitalized on that to increase their lead. Their lead ballooned and they were able to lead 68-46 by the end of the third quarter.

Making use of the break after the third quarter to compose themselves, NTU came out with everything they got. They upped the intensity of their defense and were able to score on several of their possessions to cut the lead down to 14. With the tide seemingly turned in favour of NTU, the NUS coach called a strategic timeout to prevent the farther onslaught by NTU.

NUS were able to regroup from the timeout and prevented NTU from cutting the lead farther. Behind Arno’s (NUS #7) 26 points, NUS eventually defeated NTU 83-64.

Regarding his team’s performance, Kevin (NUS #2) commented, “I am just very proud of them. I mean hard work really pays off. Throughout this summer, we really put in a lot of work like throughout the week. And even on weekends, when we have time, we will head down to put up our shots. For our team, we are really very bonded, spending a lot of time together on and off the court. I really think this was worth it. Also, we have a lot of graduating people this time and I am really proud to play with them. I really love every single one of you, including all the seniors who come back to support us and those who did not really get to play but is always there for the team, along with the coach and the coach’s wife. We are really a family as a team. So, I am really proud of everyone and am grateful that they give me the opportunity to be their captain.”

NTU captain, Darryl Lee (NTU #30), commented, “I think why we lost so much was partly because we got affected by the score, by how much they (NUS) led us by. There were some lapses here and there but there were also times when our defense was very good, like at the start of the fourth quarter and I feel that we can really work more on that. We should start every game on our defense and the offense will naturally come.”

NTU co-captain, Brian Wong (NTU #0), added, “I think we need to move on and look past this. We just have to play hard and learn from our mistakes. This game is already over, but our season is not.”

With this victory, NUS continue their undefeated streak with a win-loss record of 5-0 while NTU falls to a 2-1 record. NUS will play against Singapore University of Technology and Design (SUTD) on the 27th of September at 8.40 pm. On the other hand, NTU will play their next game against the Singapore Institute of Management (SIM) on the same day and time as well.