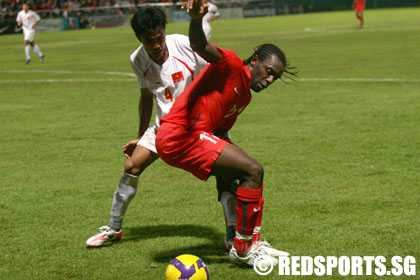 Jurong East Stadium, Wednesday, November 26, 2008 – Singapore were held to a 2-2 draw tonight by Vietnam in a warm-up friendly for the upcoming ASEAN Football Federation (AFF) Suzuki Cup scheduled to kick off on December 5th in Jakarta and Bangkok.

It was a game for coach Raddy Avramovic to work out a balanced starting XI and based on tonight’s game, the answer won’t be an easy one to find.

A large and noisy contingent of Vietnamese fans gave the surreal feeling of playing away for the Singapore squad as they started with Agu Casmir and Noh Alam Shah upfront with Indra taking up a withdrawn position on the right side.

The celebrations did not last long because Noh Rahman gave Vietnam a penalty moments later when he pushed the Vietnamese attacker in the box.

Le Cong Vin scored from the spot and the score remained at 1-1 until half-time.

The second half was a better spectacle for fans as the game came alive with more open play and scoring chances created by both teams.

Vietnam were a more settled side in this half and created more chances on goal but their finishing let them down.

The presence of Aleksandar Duric on the pitch made the difference for Singapore as the big centre forward created the second goal for Agu Casmir with intelligent play.

Singapore looked like they would wrap up the game with a win but Vietnam kept plugging away to their credit and scored a deserved equaliser at the death.

It was just reward for their efforts, especially after having made chances for themselves just before their equaliser.

The game then went to meaningless penalties which Singapore won 5-4 but most will note the poor defensive performance by the Lions.

Ridhuan runs to celebrate with Baihakki like they have won the World Cup. In contrast, Daniel Bennett and Aleks Duric walk calmly up to him to celebrate.

Baihakki scores for Singapore. 5-4. Singapore wins the game on penalties.

48th min: Vietnam scores! Nguyen Quang Hai chases a seemingly dead ball down and cuts it back into the path of Phan Van Tai who hits it past an exposed Lionel Lewis in goal. The Vietnamese fans are going wild!

47th min: Doan Viet Cuong blows what must be Vietnam’s last chance way way over the bar. They are running at the Singapore defence with impunity.

45th min: Agu cuts into the box. Plays a one-two with Duric, Agu shoots just over! What a waste.

44th min: Shaiful get the balltangled up in his boot laces. Messes up a cross. Ridhuan can’t hold the ball without falling over. He looks to the ref in frustration.

41st min: Nguyen Quang Hai creates space for himself in the box. He shoots just wide and pounds the ground in frustration. He knows he’s missed a good chance.

Vietnam are not giving up and continue to plug away in attack. They are creating openings for themselves but a telling final ball is missing.

35th min: Agu scores Singapore’s second! But the goal was created entirely by Aleks Duric who turned his marker, then had his shot saved. But Duric kept running and turned the ball back into the 6-yard box where Agu had the simplest of headers to put the ball in.

33rd min: Vietnam create another chance for a shot but they blow it wide.

32nd min: Agu with a free header…it goes over. Another wasted chance.

Singapore coach Raddy Avramovic gets mad enough at the referee that he has to be told to sit down.

30th min: Lionel Lewis comes in for Hassan Sunny in the Singapore goal.

29th min: Precious tries to find a teammate from defense. No good. It goes to a Vietnamese player.

25th min: A brilliant Vietnamese breaks down at the last moment when the striker can’t pull the trigger, his volley is mistimed and he shaves the ball.

23rd min: Shahril Ishak’s through ball puts Duric through on goal. But Duric has not enough speed. He’s pushed the ball too far but he pulls it back. The ball crawls agonisingly across the face of the goal! Agu can’t get to it. The ball comes back in for Duric who heads it back to the far post, Shahril AND Agu both go for it and someone heads it onto the bar! How did they miss an open goal! They got into each other’s way. Unbelieveable.

18th min: Nguyen Viet Thang has space at the edge of the Singapore penalty box. He shoots, Sunny saves!

Vietnam has had more shots on target than Singapore. They look good for a second goal. Singapore have created no chances to speak off yet.

14th min: Pham takes a free kick…the dipping shot is saved by Hassan Sunny. Pahn Van Tai takes the ball down nicely, sidesteps a Singapore defender and almost scores but it goes out for a corner.

13th min: Mustafic mugs Pham Thanh Binh from behind. Get a yellow card.

6th min: Agu lays it off for Shi Jiayi whose shot goes so wide, it goes out for a throw in.

4th min: A free header for Vietnam but it goes over the bar. Singapore defence is slack.

3rd min: What is Precious doing? Calamitous defending gives the Vietnamese attacker a free run at goal but Ridhuan gets back and tackles just in time.

45th min: Noh Rahman does a hatchet job on the Vietnamese captain Nguyen Minh Phuong. What a mistimed tackle…ouch.

41st min: Noh Rahman gives away a penalty with a push on a Vietnamese player in the penalty box. He should have kept his hands to himself. The referee S. Kumar had no choice but to give it. It happened right in front of him. It was obvious even from the media box.

39th min: Wilkinson scores! A Shi Jiayi pass from the left flank floats over to an unmarked John Wilkinson who heads it downwards, the ball bouncing once before going past the Vietnamese keeper Hong Son. Bad marking but clinical finish and awesome passing by Jiayi for picking him out from afar.

37th min: Indra takes the corner but Baihakki heads it over the bar.

36th min: Agu holds the ball up well and lays it off for John Wilkinson who shoots…but the ball is deflected out for a corner.

The Singapore fans need to work on some musically pleasing chants and cheers.

34th min: Another cross comes in and Hassan Sunny is forced to tip it out for another corner. Real Vietnamese pressure now.

33rd min: Excellent Vietnamese move ends in Pham Thanh Luong taking a shot that Hassan Sunny is forced to push out for a corner.

31st min: Precious tries an almost comical header that just doesn’t fall nicely for the Vietnamese forward. It would have been a hilarious assist if Vietnam had scored.

31st min: Agu gets the ball at the edge of the penalty box but doesn’t know what to do with it. He passes it straight to…a Vietnamese defender.

29th min: Vietnam making some promising attacks. Their captain Nguyen Minh Phuong finds himself in a ton of space to shoot at Hassan Sunny but his shot flashes wide. Where were the Singapore midfielders?

27th min: Ah, a Vietnamese free kick on the edge of the box after a nice attack ended in Baihakki giving away a free kick. But the free kick hits the wall and goes out for a corner.

Vietnam not so impressive themselves. No attack of note, no penetration.

23rd min: Stiff challenge by Noh Alam. He’s happy to be back wearing the Singapore colours.

20th min: Ah some excitement. Shi Jiayi fools his marker and gets by but is taken down in the process. Free kick in a a dangerous position for Singapore.

Almost 20 minutes gone and not a single shot on target by Singapore yet.

Something about the weird hair colour of Alam Shah and Indra. From up here in the media box they look like they are wearing wigs.

15th min: A nice layoff by Alam Shah for Agu in the penalty box…but Agu’s shot is deflected out. Wasted chance for Singapore.

Indra can’t hold up the ball. He’s muscled off the ball by a Vietnamese player.

No real chances created by Singapore so far. I think they are trying to figure out if they are playing at home or away. 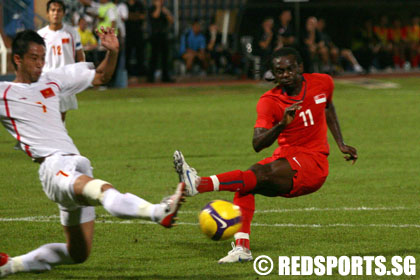 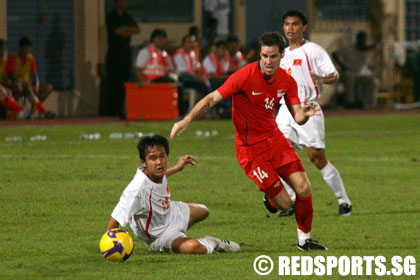 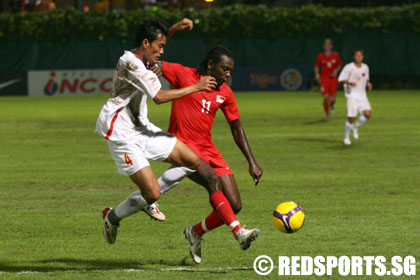 Daniel Bennett throws the ball in with a huge crowd of Vietnamese supporters in the background. (Photo 5 Â© Lai Jun Wei/Red Sports) 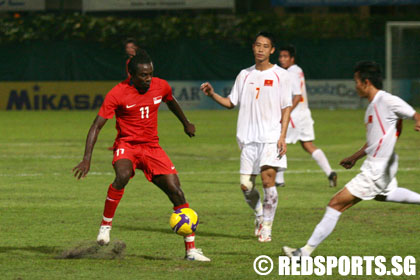 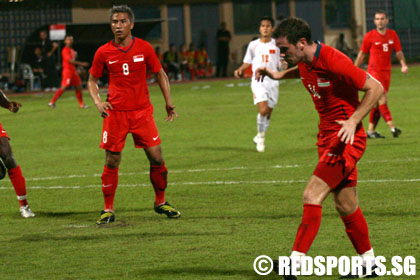 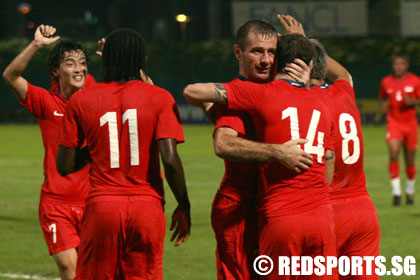 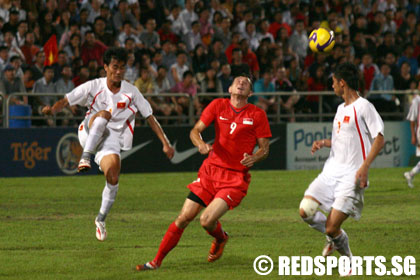 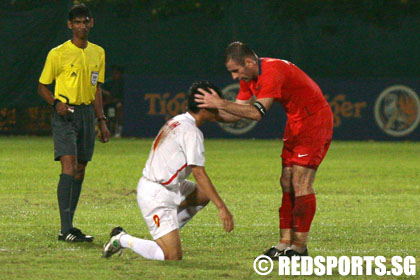 “Are you ok?” Mustafic Fahrudin (Singapore, #15) checks his opponent after he had bundled over the player in a strong tackle. (Photo 10 Â© Lai Jun Wei/Red Sports) 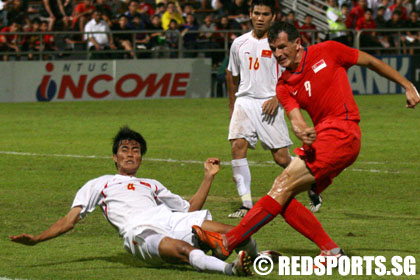 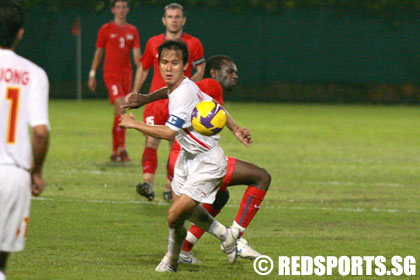 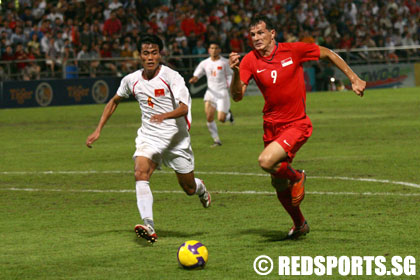 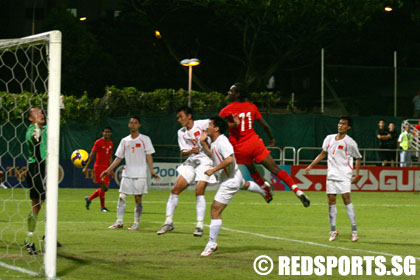 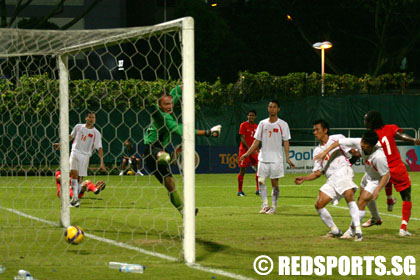 … that goes past Vietnam goalkeeper Duong Hong Son and into the back of the net for Singapore’s second goal of the night. (Photo 17 Â© Lai Jun Wei/Red Sports) 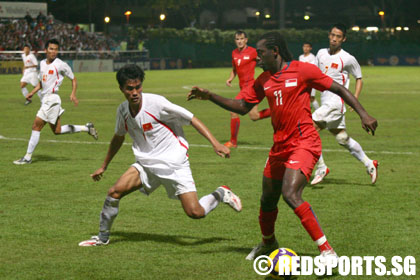 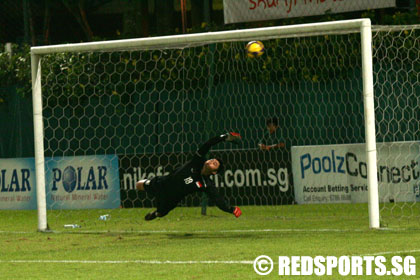 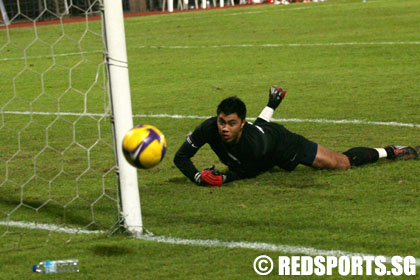 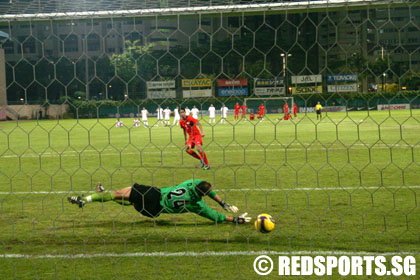 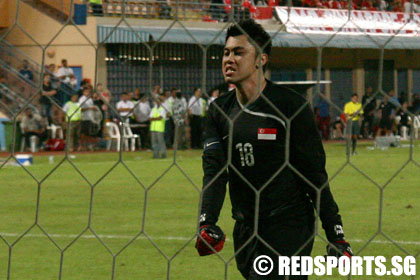 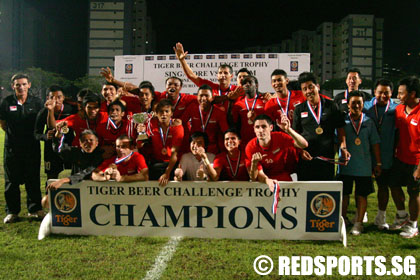 They win a meaningless game on penalties but the lack of preparation for the AFF Suzuki Cup is obvious. (Photo 23 Â© Lai Jun Wei/Red Sports)