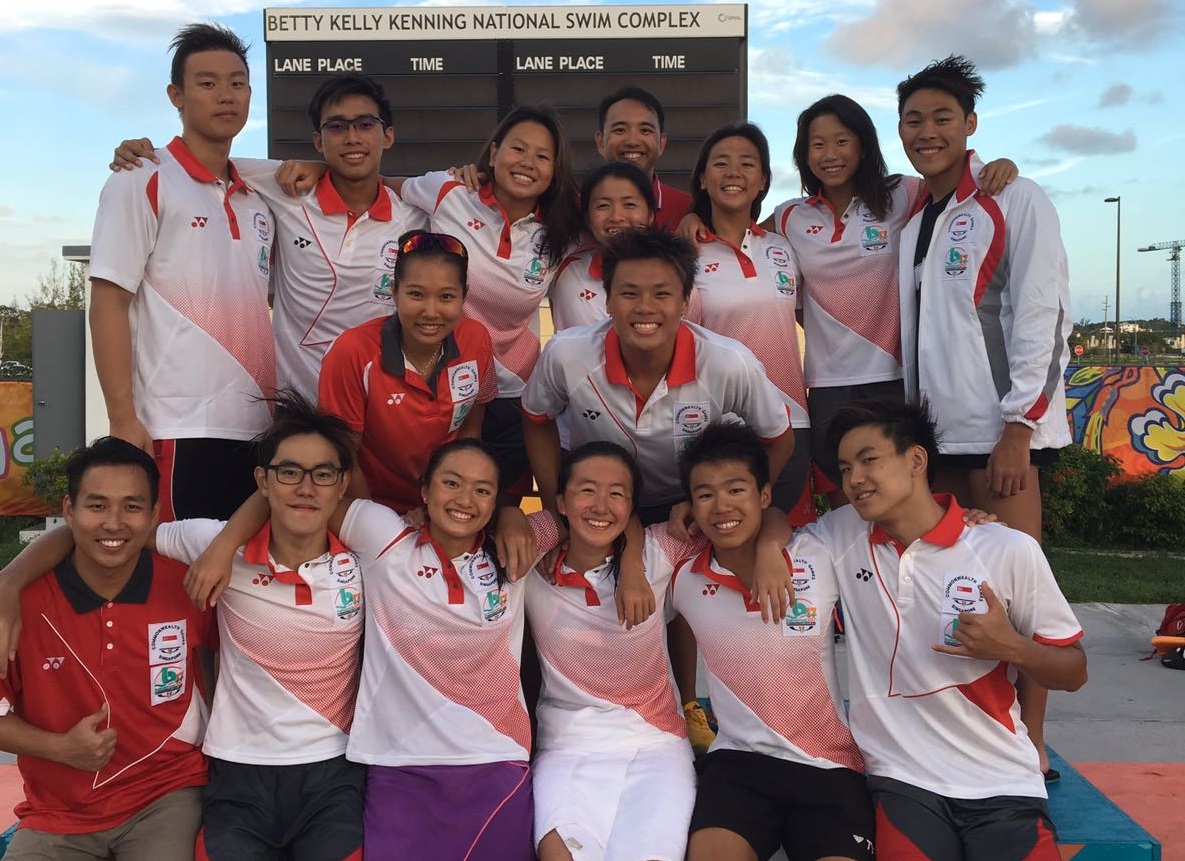 Nassau, Bahamas, Saturday-Sunday, July 22-23, 2017 — Quah Jing Wen continued her gold-medal winning streak on Day 3 of the competition when she bagged the top spot in the Girls’ 100m Butterfly at the Commonwealth Youth Games.

The 16-year-old swam to a huge personal best time of 59.9 seconds and was the only swimmer in the field to break the coveted one-minute mark. Second place went to Ciara Bridget Schlosshan of Great Britain who touched the wall in 1.00.14 while Hannah Frances Bates took the bronze in a time of 1.01.27. Fellow Singaporean Nicholle Toh finished just outside the medals in fourth place with a time of 1.01.52.

Quah’s time of 59.92 is only 0.57 seconds off the her older sister Quah Ting Wen’s personal best time of 59.35. However, the teen has already surpassed Ting Wen’s season best of 1:00.14 which shapes up for an exciting sibling showdown come SEA Games this August.

Quah then teamed up with Natasha Ong, Darren Chua and Jonathan Tan in the mixed 4x100m Freestyle relay where they won another gold medal. It was a tight race between Singapore and England, and while Singapore had a slight edge over the first 200m, a strong third 100m from England saw them take over the lead by 0.15 seconds.

However, a gutsy last leg by Quah sealed the deal for Singapore when she got her hand to the wall just 0.16 seconds ahead of England with a time of 3.36.01. England settled for second place with their 3.36.17 effort and Scotland took the bronze in a 3.37.05.

Also in action were Dylan Koo and Ong Jung Yi who were locked out of the top podium spot by Lewis Ward Fraser of Wales who swam the 100m Butterfly in a 53.87 to finish almost half a second ahead of the two Singaporeans. Koo had to settle for silver with a time of 54.32 with Ong coming in third just behind with a 54.35.

The final day of the meet saw Team Singapore take home another two medals, a silver, courtesy of Quah’s 200m Butterfly and a gold from the mixed 4x100m Medley Relay.

Quah failed to make it four back-to-back golds but came close to her personal best time when she clocked a 2.13.29 in the 200m Butterfly. Ciara Schlosshan was way ahead with a time of 2.10.95 and comfortably took home the gold medal. Third place went to Australia’s Brittany Lee Casteluzzo who finished just behind Quah with a time of 2.13.80.

The quartet of Francis Fong, Samuel Khoo, Quah Jing Wen and Natasha Ong had a comfortable race in the 4x100m Mixed Medley relay where they took home yet another gold medal for Singapore with a time of 3.56.74. New Zealand, who finished second, could only manage a 3.57.21 and England were a distant third with a time of 3.59.33.

Team Singapore coach Leonard Tan was very pleased with the swimmers’ performances, especially against traditionally strong swimming nations such as Australia and England, but he was also realistic about the standard of the swimmers present.

“I think that it’s a good sign for us that we are staying competitive with these traditionally strong nations. There are still a lot of faster swimmers out there from these countries. Feeling good about the medals but we still have some room for improvement,” said Tan.

“The swimmers’ training have been good leading up to this meet. This is not a tapered meet for them, so they were still training hard last week. They were just given a couple days rest for this meet. They have been consistent throughout the whole year,” added Tan.

With the conclusion of Swimming at the Commonwealth Youth Games, the swimmers managed to put Singapore sixth on the medal table with their haul of seven Golds, four Silvers and six Bronzes.

“We did really well,” said Dr Low Chee Yong, Singapore’s chef de mission. “In fact, based on a previous analysis by the National Youth Sports Institute’s performance analyst, Ivan Ee, we were targeting 11 medals but we now have more than that. The athletes really took this in their stride and made the most out of this opportunity to race competitively. The experience our athletes have gotten from this competition will put them in good stead for the coming SEA (Southeast Asian) Games. To hear the Singapore national anthem played seven times over the course of four days was really special and we are all glad to be part of this.”

The majority of the swim team will be heading to KL in four weeks’ time to compete at the SEA Games while the rest of the team will be competing at the World Juniors in Indianapolis, USA.