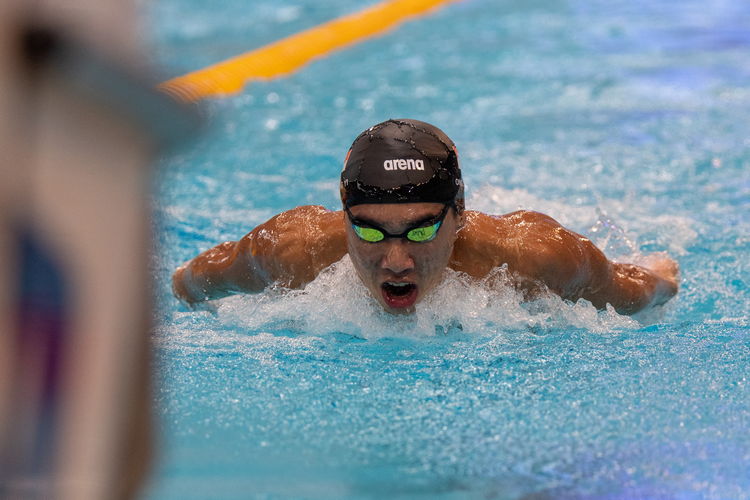 Ong Jung Yi of ACS(I) comes up for air one last time before breaking the meet record for the A Division Boys’ 200m butterfly by almost five seconds with a time of 2:01.93. (Photo 1 © Jared Khoo/Red Sports)

OCBC Aquatic Centre, Friday, April 26, 2019 — Faced with a bout of asthma attacks that recurred last year, the past few months of regaining top form in the pool were no less trying for Ong Jung Yi.

“It was quite a challenge,” said the Year 6 student of Anglo-Chinese School (Independent). “It had affected my training a little, because it caused me to have less stamina so I couldn’t really keep up with the pace, especially for an event like 200 fly.

“It’s a very long and tiring event, so it really affects my race especially at the later part,” Jung Yi explained.

Despite the setback, the ACS(I) swim team captain managed to erase his doubts by wiping out the A Division boys’ 200-metre butterfly meet record on the final day of the 60th National Schools Swimming Championships, surpassing the previous mark by nearly five full seconds.

While falling short of his personal best of 1 minute 59.76 seconds set at last year’s Singapore National Swimming Championships (SNSC), Jung Yi’s time of 2:01.93 was enough to shatter the meet record of 2:06.85 held by ACS(I) alumnus Jerryl Yong for six years.

“I’m getting closer to my personal best time, so I’m very happy because I was actually quite nervous before the event as the 200 fly is a very tiring race for me,” Jung Yi added.

His gold in the event, where he finished more than seven seconds ahead of runner-up and teammate Lau Wei Hong, added to his other individual victory in the 100m butterfly a day earlier. He had won the shorter event in 54.20s, just short of his own meet record of 54.12s set last year.

He had also swum the butterfly leg for ACS(I)’s victorious 4x50m medley relay team on Thursday, and took on the third leg of ACS(I)’s record-breaking 4x50m freestyle relay swim in the championships’ concluding race on Friday.

The ACS(I) freestyle relay quartet, which also comprised of Mikkel Lee, Gabriel Foo and Jonathan Tan, stopped the clock at 1:33.93 to crack their seniors’ 2016 meet record of 1:35.16.

Mikkel had led ACS(I) off with a 23.06s first leg in the relay, setting a new A Division boys’ 50m freestyle benchmark which previously stood at 24.07s. Earlier in the day, the swim sprint specialist had also broken the A Division boys’ 50m backstroke record by touching the wall at 26.60s, adding to the 50m butterfly record of 24.44s which he set on Thursday.

Not wanting to be outdone, their junior Gabriel Koo in fact kickstarted the record-setting spree on Friday afternoon — paving the way for a total of eight championship marks to be rewritten in the final session of the meet, which also included the feats of Raffles Institution’s Cherlyn Yeoh (56.02s) in the A Division girls’ 100m freestyle and Methodist Girls’ School’s Ashley Lim (2:19.83) in the C Division girls’ 200m butterfly.

Gabriel’s record swim in the C Division boys’ 50m backstroke was one of six achieved by ACS(I) swimmers on the final day, and added to his other individual meet record in the 200m backstroke.

“To be honest, it was a 50-50 thing for me, I knew I could do it but it just depended on how hard and how much I wanted to do it,” said the Secondary 2 student of his feat in the one-lap event.

“I definitely put in a lot of effort and I think it is well-deserved,” Gabriel added. “I knew I could do it all along, and it was something I wanted to work towards, so I think as long as I tried my best, I could do it.”

Gabriel went on to swim the second leg of the 4x50m freestyle relay together with teammates Jordan Ong, Cohen Barron Chiam and Fredrick Fong, setting ACS(I) on their way to dominate all three boys’ freestyle relay finals in the last three races of the day. The girls’ freestyle relays were won by RI for the A Division and MGS for the B and C Divisions, ensuring that the champions of the freestyle relays mirrored that of the overall team title winners.

ACS(I) once again retained their stranglehold of all boys’ divisional championships with a sixth straight grand slam of A, B and C titles, while RI and MGS retained their A and B girls’ titles with the latter also dethroning defending champions and nearest rivals Raffles Girls’ School in the girls’ C Division.