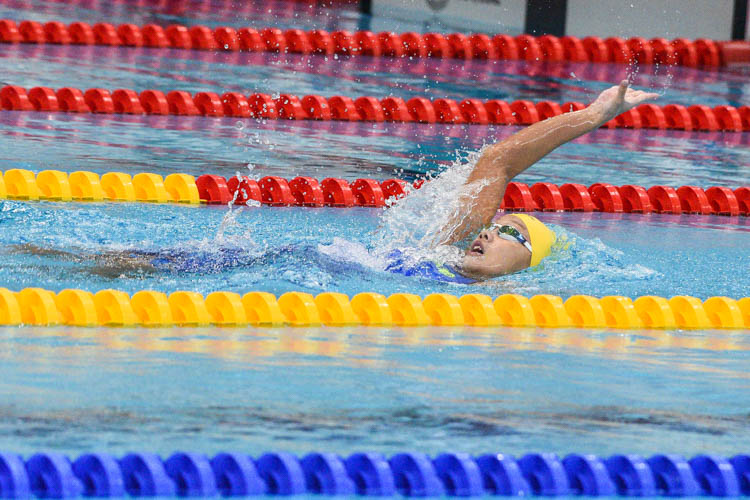 Charla Tan of RGS set a new meet record in the B Division girls’ 200m Backstroke when she clocked 2:22.50 to win the final ahead of the previous record holder, teammate Bonnie Yeo. (Photo 1 © Iman Hashim/Red Sports)

OCBC Aquatic Centre, Thursday, April 25, 2019 — In the first of two days of finals at the 60th National Schools Swimming Championships, nine meet records fell with Charla Tan of Raffles Girls’ School (RGS) putting up the most spectacular performance by dipping below the previous record of 2 minutes 26.27 seconds by almost four seconds in the B Division Girls’ 200m Backstroke.

In that event, not only Charla but also teammate Bonnie Yeo dipped below the record, which was held by Bonnie herself, having set it in the heats two days earlier. Charla and Bonnie — both Secondary Three students — clocked timings of 2:22.50 and 2:25.91 respectively.

Despite winning the race in dominant fashion — over three seconds ahead of Bonnie while breaking Bonnie’s mark by almost four seconds — Charla had not been expecting to set a new record.

“I was just focusing on my race and to do my best,” said Charla.

Her timing of 2:22.50 would have earned her a medal in all three boys’ categories for the same event — third in the A Division, fourth in the B Division, and second in the C Division. It is also the second fastest timing clocked by any female Singaporean this year so far.

Bonnie was in fact ahead of Charla for the first half of the swim, finishing the first 50-metre lap in 33.02s while Charla clocked 34.23s, and reaching the halfway mark in 1:08.85 with Charla still behind in 1:09.53. Over the next two laps, however, Charla kept her laps at around 36 seconds while Bonnie dropped to around 38 seconds.

“I went out too fast in the first lap, so in the second half I was quite tired,” explained Bonnie.

Behind Charla’s record is countless hours of hard work, with up to eight to nine training sessions per week.

“This year I’ve been training a little bit more than last year; I was focused a bit more on my studies then. I want to thank my coach, Mr Zhang Jianlan, for training me to the win and record,” concluded Charla.

Charla, however, was not the only person surprised at her own record-breaking performance.

The entire A Division Girls’ 200m Medley relay team from Raffles Institution (RI) were taken aback when they set a new record of 2:01.08.

This was despite the fact that their team consisted of three members from last year’s record-breaking quartet — Kathlyn Laiu (breaststroke), Elizabeth Lee (butterfly) and Cherlyn Yeoh (freestyle), all Year 6 students in their final year of competing for RI. Their Year 5 junior Chelsea Khoo (backstroke) completed the line-up.

“We were hoping to just give our best and aimed to win the event,” said Elizabeth on behalf of her team, who had collectively dismissed the idea that they had the record on their minds.

In fact, they even changed their line-up from last year when they had set the record of 2:02.52 — then, Cherlyn did the backstroke and Elizabeth the butterfly. Kathlyn stuck to the breaststroke.

“We really did not expect to be able to break the record so we did not even consider how changing the line-up would affect the overall timing,” said Cherlyn.

The B and C Division Girls’ 200m Medley relay events, however, were much closer fights as Methodist Girls’ School (MGS) twice edged out RGS with a margin of 1.01 seconds and 0.24 seconds respectively.

The remaining finals were held the following day on Friday, 26 April at the OCBC Aquatic Centre.