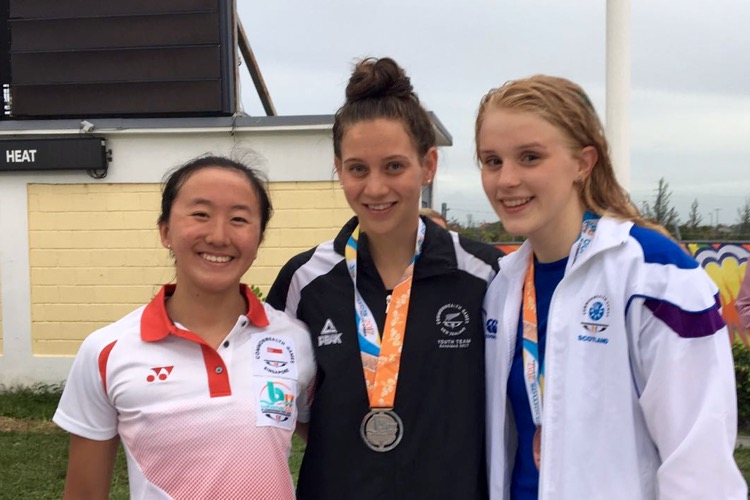 Nassau, Bahamas, Thursday-Friday, July 20-21, 2017 — Leading the charge for medals at the Commonwealth Youth Games was Quah Jing Wen who, despite having a heavy competition schedule, powered through to take the top spot in the Girls’ 50-metre Butterfly and 100m Freestyle.

On the first day of the competition, the 16-year-old held off strong competition from swimming powerhouses Great Britain and Australia to finish first in the Girls’ 50m Butterfly with a new personal best time of 27.23 seconds. It was a tight race and second place went to Alicia Wilson of England who touched in a 27.28s. Fellow Singaporean Nicholle Toh finished fifth in 27.62s, just off her personal best of 27.55s set in March this year.

On the second day of the meet, Quah went on to blitz the competition in the Girls’ 100m freestyle, her winning time of 56.31s not only a new personal best but was also 0.28 seconds ahead of the second-placed finisher, Laticia-Leigh Transom of New Zealand (56.59s). Scotland’s Sophie Smith took the bronze with a time of 56.95s and Natasha Ong of Singapore finished sixth with a 57.53s.

Also picking up another gold for Singapore was Francis Fong who took the top spot on the podium in the Boys’ 100m Backstroke in a time of 56.42s. He also picked up a bronze in the 50m Backstroke with his 26.50s effort.

Another stellar performance came from Christie Chue who swam to a huge personal best and a gold in the Girls’ 50m Breaststroke. Her time of 32.38s shaved almost half a second off her old time of 32.81s.

“I felt good having raced in the 200m Breaststroke the previous day so I was confident of doing well in the 50m breaststroke. I listened to my coach’s advice and I just focused on what I needed to do and went out there and gave it my all and I am glad that my hard work in training has paid off,” said the 17-year-old.

This brings Team Singapore’s total medal tally to four gold, one silver and three bronze, putting the nation fourth in the medal standings.