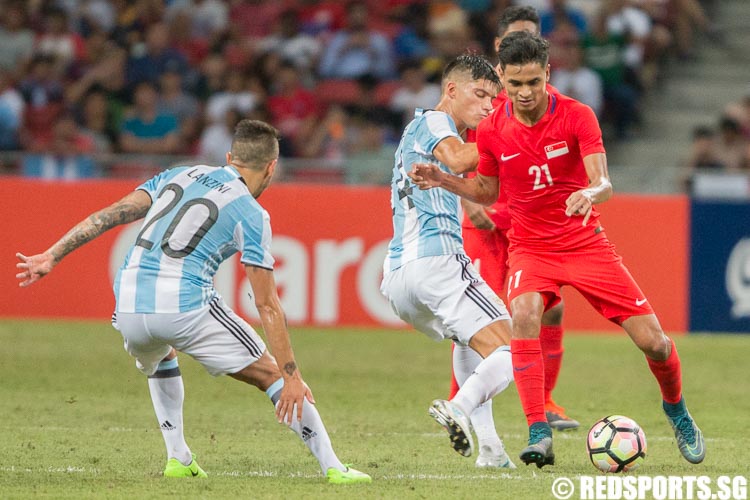 National Stadium, Tuesday, June 13, 2017 – The gulf in class was evident when Fifa world No.2 Argentina crushed a Singapore side ranked 155 rungs below them 6-0 in an international friendly fixture, organised to mark the Football Association of Singapore’s 125th anniversary.

Left crestfallen after such a heavy defeat, Singapore coach V.Sundram Moorthy said: “Basically, we were playing against the (second-best) team in the world. The boys tried their best and they learnt a couple of lessons in this game.

“Technically you can see how superior (Argentina) are in rotating the ball, so comfortable in getting the penetration passes. We sat deep, tried to organise our boys and we conceded two goals from set-plays in the first half. That’s creditable for the boys because they were compact (but) we slept during the set-plays when they scored.

Noting that most of his players were fasting, Sundram also added: “In the second half, with all the changes, the boys were tired and we needed to just try to do our best. I believe the boys gave everything … I thought we could hold them and we could fight, I was confident that we could battle.”

Up against opposition far superior, Singapore were helpless. Coming off a 1-0 victory over arch-rivals Brazil last Friday in his first match as Argentina boss, Jorge Sampaoli signalled his intent to attack when he fielded only two defenders in an ultra-attacking 2-3-4-1 formation against the Lions.

The first 20 minutes saw Singapore cope fairly well against their more esteemed peers. Set back deep, the four-time ASEAN Football Federation Cup champions crowded their own box to deny Argentina space to run into and blocked ensuing shots. Singapore were unable to venture forward in attack, however, barely threatening the opposition goal.

Custodian Hassan Sunny (SIN #18), focused and on alert, made several key saves early on to keep it goalless but it was only a matter of time before Argentina would break the deadlock.

In the 24th minute, Roma central defender Fazio’s (ARG #14) close-range flick from a corner found the net for his first international goal before Correa (ARG #24) made a clever near-post run five minutes later to tap in Dybala’s (ARG #21) low cross to make it 2-0 on his debut.

As both teams made their way to the dressing room at half-time, a few Singapore players exchanged jerseys with their counterparts – a process that usually occurs when the match has concluded. Regarding this matter, Sundram firmly stated: “It should (have been) done after the game.”

In the second half, Argentina were still unfazed and restricted the Lions to their own half. Singapore suffered a blow when Hassan (SIN #18) injured himself in the 50th minute and was substituted for Izwan Mahbud (SIN #1).

As Singapore became fatigued, Argentina were still spritely and showed no mercy in attack. The visitors were hungry for more goals, gladly taking advantage of a tiring Lions’ defence. In the 60th minute, the diminutive Gomez (ARG #26) marked his first cap for Argentina with a piledriver from the edge of the box to make it 3-0.

Substitute Paredes (ARG #5) also had more reason to celebrate his international debut when he finessed the ball past Izwan (SIN #1) in the 74th minute. Fellow substitute Alario (ARG #7) smashed a first-time volley into the back of the net in the 90th minute for his first Argentina strike before Di Maria’s (ARG #11) cheeky back-heel finish saw the match end 6-0 to the world footballing giant.

Speaking through a translator, coach Jorge Sampaoli briefly summarised his team’s dominant performance, saying: “They looked to focus on attack and put pressure on the opposition. They created the chances but they couldn’t score more, but the chances were there. (I’m) happy with the performance, happy with the team and they managed to translate my ideas onto the pitch.”