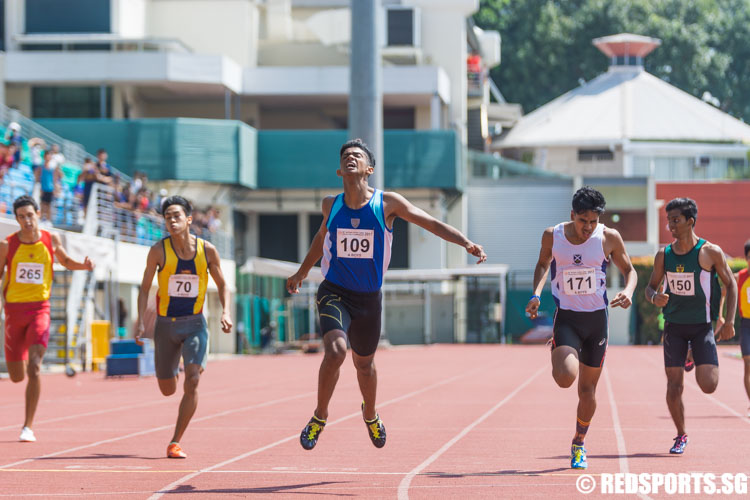 S Shahmee Ruzain (#109) of Catholic Junior College in action as he crosses the finish line. He placed first with a timing of 22.14 seconds. (Photo 1 © Jerald Ang/Red Sports)

Bishan Stadium, Monday, April 24, 2017 — He is the reigning A Division boys’ sprint double champion from last year. Justifying that tag, Shahmee Ruzain retained his 200 metres title at the 58th National Schools Track and Field Championships despite a stronger field of competitors.

The second-year Catholic Junior College (CJC) student crossed the finish in a new personal best of 22.14 seconds, fending off strong competition from Dinesh Hulbert of St. Andrew’s Junior College and Joshua Lim of Anglo-Chinese School (Independent), who completed the podium in 22.42s and 22.64s respectively.

Hulbert and Joshua had also come in second and third in the 400m final last week, going under the 50-second mark.

“I’m very thankful for my performance, I didn’t really expect it,” Shahmee said. “So I guess all glory goes to God. I would like to thank my parents, they have supported me a lot this year. Especially being the A-Levels year, I have to balance my studies and track.”

“I would also like to thank my coach, Coach Kamarul. He took me in and has been there for me throughout the whole journey,” he added.

Going into this final, runner-up Hulbert was widely considered the favourite for the gold. In addition to being the fastest qualifier from the semi-finals, Hulbert had also beaten Shahmee at the 43rd Singapore U18/U20 Athletics Championships last month.

Aided by a 2.3 metres/second tail-wind, Hulbert’s 21.68s in that race remains the second-fastest clocked by a Singaporean this year. Shahmee had clocked 22.18s then.

Shahmee insisted that all is good between him and Hulbert, who is not only his competition rival but his training partner.

“I guess you lose some and you win some,” Shahmee said. “I would say, for (Hulbert and I), we’re going to take this as a stepping stone, and hopefully progress further in track.”

Shahmee acknowledged the merits of training with a group of top athletes.

“It definitely helps me,” he said. “We can be sparring buddies, especially for 200m (intervals). Sometimes we have 4x200m workouts, and running with Zubin is like… very hard, but it also pushes us to go further.”

In approval of the strong field of competitors, Shahmee said, “I think it makes it more beautiful. The standard from last year to this year has improved a lot, and it’s a lot more exciting. Like when you walk onto the track, you can feel it – there’s pressure, there’s heat, there’s competition. And it pushes you to go further and improve your timing. So I guess it’s all good.”

Shahmee will now look to complete the sprint double again – but he faces tough competition. Qualifying second-fastest for the 100m final, he has to overcome the challenge posed by RI’s Joshua Chua, who set the B Division 100m record of 10.87s last year.

The century sprint final will take place on April 28 at the National Stadium, with the relays happening on the same day. Shahmee’s CJC team has qualified fastest for the A Division boys’ 4x100m relay final.