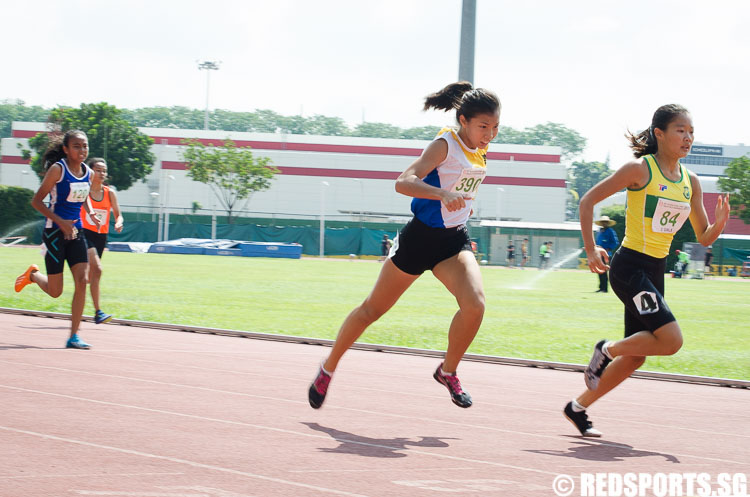 Bishan Stadium, Monday, 24 April, 2017 — Only God knows how much Samuel Lim and Emily Ong slept the night before their respective 200-metre finals. Facing his first individual final at the 58th National Schools Track and Field Championships, Samuel was wrecked with self doubt. Emily earlier won the 400-metre final, but knew a formidable rival in Bernice Liew lay in wait.

“I was really scared when I felt her chasing up with me towards the end,” said Emily of Singapore Chinese Girls’ School, with her eyes fixed on her good friend Bernice as both girls sat on the floor resting after their race. “The competition was much tougher and I couldn’t predict what was going to happen. There’s practically nothing separating the both of us.”

Emily posted 26.54s to wrap up a 200-400 sprint double, while Bernice settled for silver with 26.59s. Bernice has two events remaining on Friday at the Sports Hub: the individual 100m, for which she qualified second-fastest and the 4 by 100m relay, for which Nanyang Girls High School qualified fastest.

Intense rivalries such as this burgeoning one between Emily and Bernice are what make school sports so fascinating and exciting.

In the early 1990s, there were Lim Joo Lee, then of Raffles Girls’ School and Raffles Junior College and Nurulaini Ariffin, then of CHIJ (Toa Payoh) and National Junior College. Then in the 2000s, there were the RI-RJC legend Jonah Tang and Lee Cheng Wei, formerly of Chinese High School and Victoria Junior College, and more recently, the ex-Sports School duo Eugenia Tan and Shanti Pereira.

For Samuel, he was just thankful everything worked out in the end.

His first words as he sat curb side outside of the main competition area shortly after the race, while grinning widely in between deep gasps to catch his breath: “I feel so blessed to have the coaches that I have, and to have the kind of training and support from my school and my family.”

“I need to think a bit more,” he said, much later. “The main aim going into this race was to get in front of the Sports School guy in lane five before the straight, but I went a bit too hard after the bend when I was supposed to take it a little easier to conserve energy so that I can finish fast.”

He will have two more opportunities Friday to hone what he’s learned so far.

Samuel qualified second-fastest for the individual 100m final where he has to contend with another Sports School speedster: Jeft Tay who has also bagged a gold medal of his own in the 100m hurdles. And then there’s the 4 by 100m relay for which Sam anchored to help ACS(I) qualify third-fastest.

He will likely also have his hands full with not only Jeft and Adhwa’ in the years ahead, but also Raffles Institution’s Liang Jing Hao, who qualified for the 200m final but did not end up running because of injury.

For an ACSian though, the best is always yet to be.