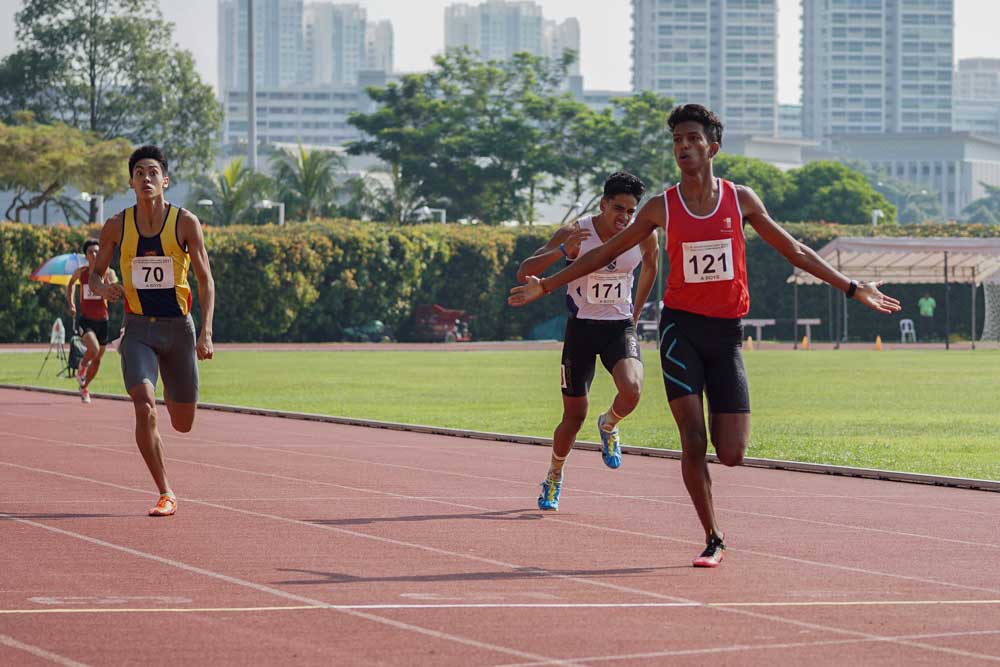 Thiruben (NJC #121) with his arms outstretched in victory. The top three runners of this race all finished under 50 seconds, for the first time in at least 34 years in the history of this event. (Photo 1 © Benedict Yeo/Red Sports)

Bishan Stadium, Thursday, April 20, 2017 — It was arguably the most anticipated race of the 58th National Schools Track and Field Championships.

Three top athletes, but only one could emerge tops in the A Division boys’ 400 metres.

Dinesh Hulbert of St. Andrew’s Junior College finished just 0.11s behind Thiruben in that race, while Joshua Lim of Anglo-Chinese School (Independent) holds the 400m records in both the C Division (51.65s) and B Division (49.24s).

Eventually, Thiruben had the final say as he clocked 48.71s to finish just 0.02s outside the championship record, set by Anglo-Chinese Junior College alumnus Zubin Muncherji in 2014.

Reflecting post-race, Thiruben said, “I was going for the record during the semis, but I tensed up too much. So I just told myself that for the final, I’m not going to care about the timing, I would just go out there and enjoy myself, focus on running my best and executing the race properly.”

“That’s what I did today, so I feel really good. I have no regrets (on missing out on the record). At the end of the day, I just wanted to enjoy myself and timing is secondary.”

Starting in lane four, Thiruben had a slow start off the blocks, getting caught by Hulbert on his inside lane by the end of the first bend. Regaining composure, Thiruben then turned on his groove in the last 200m to power ahead of his rivals.

Hulbert and Joshua had a close fight for silver, clocking 49.41s and 49.46s respectively.

The result meant that all three podium finishers went under the 50-second mark, a first in the event’s history in at least 34 years. Previously, in this span of time, the fastest third-placed result in the event was only 50.35s (electronic timing), back in 2000, as well as 50.2s (hand-timed) in 1987 and 1988.

Thiruben acknowledged the intense competition between the three of them.

“To be fair, they all did very well,” he said. “In any other year, their timings would have been gold medal-winning timings. So if there’s actually a way to share the gold medal, I wouldn’t mind that.”

“It’s a bit unfortunate that all of us are competing in the same year. But at the same time, it’s fortunate for Singapore athletics – the future is going to be bright, with all three of us pushing each other in the years to come, hopefully. So really props to them, I wouldn’t have done as well as I did without them pushing me.”

Meanwhile, Joshua was pleased to have clocked his second-fastest personal best time, after struggling to rediscover his sub-50s form earlier in the year. It only falls short of his B Division record-breaking time of 49.24s last year.

Said Joshua, “I think this year has been like a summary of this race. It’s been quite a trying time, athletics-wise and in terms of my faith. A lot of it boiled down to how much I was willing to depend on God, and I see that He really carried me through, especially for the last 200m. It was an unforgettable race, and I really enjoyed it.”

Joshua will now look towards the 200m final, for which he is the third-fastest qualifier. He will battle it out with Hulbert, and defending champion Shahmee Ruzain of Catholic Junior College.

Qualifying in first place, Hulbert is in fact the firm favourite for the 200m, having clocked a wind-aided 21.68s at the U18/U20 championships last month. It remains the second-fastest 200m time clocked by a Singaporean this year, behind Timothee Yap’s 21.62s.

As for Thiruben, he has no time for rest as he is due to compete in the 800m final a day after.

Speaking prior to the 800m final, Thiruben is confident of breaking the electronically-timed championship record in his pet event.

He said, “Once again, I’m not going to think about it too much, I’ll just go out there and execute my race plan. Hopefully, I should be running well under my PB. So if all goes well, I’ll hit the record.”

Previously only a middle-distance specialist until this year, he acknowledged that he could bid farewell to the 1500m for good.

The IAAF World U18 Championships will be held in Nairobi, Kenya, this July.

On possibly breaking the national record in the future, Thiruben said, “It’s still a long way to go, but that’s definitely something I have in mind. I just want to keep improving my times every year, push my limits, and see how far I can go.”

The 400m national record, which stands at 47.29s, is also held by Zubin Muncherji.

History is there for the taking in the near future.

(You can watch a video of the race here.)