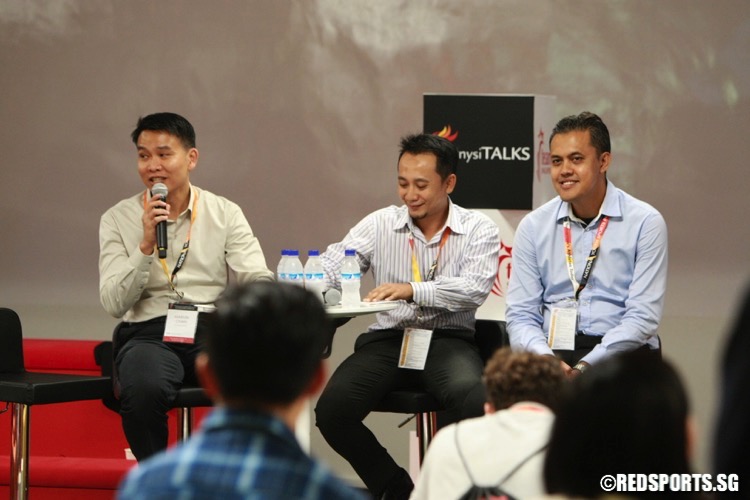 Over the years, some parents have found that their primary school children do not get enough chances to play sports in school.

If they are not good enough to play in the school team, some of these school children cannot play that sport as a Co-Curricular Activity (CCA).

Some educators are trying to change the situation on the ground.

“The (North 1 Cluster) committee wanted to address a gap in the current system, where non-school team or non-sports CCA players may not get a chance to compete and represent their schools,” said Mr Marvin Chan, Vice-Principal of Rosyth School.

The organisers held modified competitions for 5v5 Football and 3v3 Basketball. They changed the rules, format, and tone of competition to cater to the skill levels of Primary 4 and 5 children.

For example, students had to play all key positions, and every team had to field all their players to give everyone a chance.

Ng Rui Qin, 10, of Rosyth School, was delighted to get selected to represent his school for the first time at the competition.

“I never thought I would be able to represent my school in Basketball. The competition was fun and very enjoyable. I would definitely work harder to prepare myself for next year’s competition!” said Rui Qin.

Each team had six games, and they played the same opponents twice. There were no semi-finals and finals to lower the stakes in the competition. This gave the students a chance to experiment with their lineups.

“Given the ‘double round robin’ structure of the competition, each team has to play every opposing team twice,” said Mr Ahmad Zohri Bin Bakri, the Physical Education (PE) Head of Department at Rosyth School. “Anecdotal evidence showed that students were able to verbalise strategic changes – for example, switch of playing positions – and the rationale for the proposals.”

“We are for the idea that competitions are an integral part of playing sports. Challenge is to ensure that the platform is safe, and age and skills appropriate for the children,” said Mr Chan.

To encourage sportsmanship, students nominated players from opposing teams who displayed the Olympic values of Friendship, Respect, and Excellence.

Speakers from the Ministry of Education (Physical, Sports and Outdoor Education Branch) and the National Youth Sports Institute also held pre-competition workshops for the students.

Muhammad Naufal Bin Ahmad Nizam, 10, of Rosyth School, said, “We were taught how to manage our competition stress using breathing techniques, and how the amount of sleep and the water we drink, may affect our performance.”

Mr Zohri said, “With this platform, students get to participate in meaningful competitions and at the same time, represent their school. We are moving towards a more balanced and holistic model of sports participation, and students can look forward to even more opportunities to play and compete.”

“Response has been positive,” said Mr Mohd Roshan, the PE Subject Head at Rosyth School. “Children were excited to be selected for the competition and were looking forward to don the school colours. This competition provides a great platform for pupils who hardly have the chance to participate in competitions to compete in a less threatening environment. It also allows many opportunities for them to display acts of sportsmanship and get recognition for it.”

The North 1 cluster hopes to repeat this format in 2017.

“The cluster will maintain the format for football and basketball, whilst exploring possibilities of expanding our outreach, either by catering to more teams, or consideration of a new sport to be added to the current offerings,” said Mr Chan.

Mr Chan also hopes to share this format with other primary school clusters.

“It is hoped that with the positive outcomes arising from the N1’s pilot, more schools could explore similar platforms to increase the competition platforms for students,” added Mr Chan.

Mdm Carol Loi, a mother of two, thinks giving children chances to play sports is a good idea. While her eldest daughter, who is in Secondary 2, made it to the school netball team, her younger Primary 5 daughter does not play any sport because she could not make it into any school team.

For Mdm Foong Pym Sim, a mother of two boys, she is glad that her sons’ primary school has a sports carnival.

“Fairfield Methodist Primary has two tracks at its sports carnivals. One regular and one modified for the kids to just enjoy themselves. Both my kids appreciate it. I do wish it were a regular affair though,” said Mdm Foong.