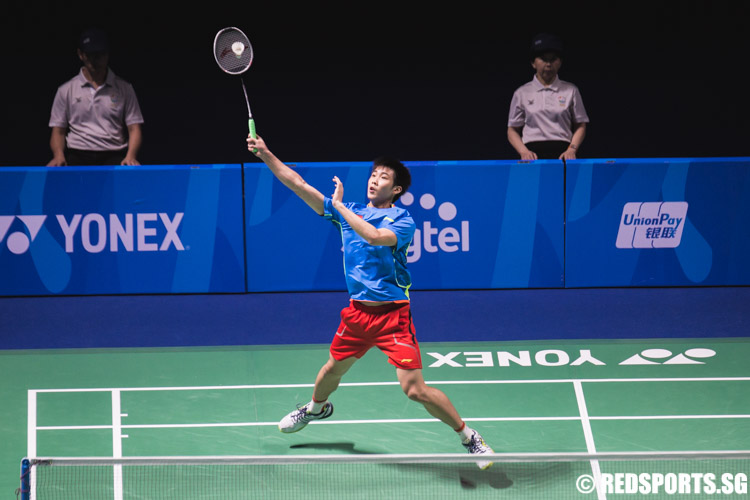 Loh Kean Yew of Singapore in action as he returns a lob. (Photo 1 © Jerald Ang/Red Sports)

Singapore Indoor Stadium, Monday, June 15, 2015 — The semi-final of the men’s badminton singles saw Singapore’s Loh Kean Yew settle for the bronze after losing in straight sets to Malaysia’s AB Latif Mohamad Arif. His was one of two bronze medals that the Singapore team came away with at the 28th Southeast Asian (SEA) Games.

Coming into this match, Kean Yew, ranked 149th in the world, seemed likely to get overpowered by his opponent who is ranked 30th. But a third victory was not impossible for the 18-year-old who had been making waves with several upsets in his SEA Games debut.

Kean Yew trailed 0–3 early in the first set, but later stole the lead. With his speed and precise shots that sent Arif diving to receive, Kean Yew was always at least one point ahead.

A close fight ensued when the set approached match point. Several faults by Kean Yew allowed Arif to catch up, and after a long rally, the latter equalised at 20–20. Unfortunately, Kean Yew was unable to hold onto the set, and it eventually went 22–20 to the Malaysian, as he capitalised on his opponent’s errors.

The second set saw Kean Yew lead by as many as five points. However, he lost momentum midway, allowing Arif to gain the upper hand from his rival’s awry shots. The Malaysian then staged a comeback to pour in five points consecutively to win the set 21–15 and take the victory.

Speaking about his performance, Kean Yew said: “I didn’t do very well. I started well but I didn’t finish well, and the most important part is the finishing.”

“I wanted to win too much that I got too rushed and wasted a lot of shots that I could’ve used to kill him but I killed myself instead,” he added.

“I guess I was lacking in experience. He knew that I was playing very smoothly so he broke my rhythm by having a lot of breaks saying that he was injured and things like that,” commented Kean Yew on his opponent. “He kept spoiling my momentum so I kept telling myself to not be affected and not lose focus but I guess I’m not professional enough to do that.”

Kean Yew’s compatriot Derek Wong was booted out of the competition after losing 1–2 to Thailand’s Saensomboonsuk T. in the quarter-final.

With the weight on the debutant’s shoulders as the only Singaporean to have advanced to the semi-final, Kean Yew felt pressure. “I took in quite a bit (of pressure) even though I told myself not to. But I can’t really control that yet,” he explained.

Kean Yew ends his SEA Games campaign here, but for the 18-year-old who dreams of being an Olympic medallist in the future, it is only the beginning. On his biggest takeaway, Kean Yew said: “I need to learn how to control my emotions. I shouldn’t be thinking of winning too much but rather of how I am going to win every point instead.”

“I really want to thank them from the bottom of my heart. I felt really good when I was playing. They were cheering for me for every single point, whether I was losing or winning,” concluded Kean Yew as he extended his heartfelt gratitude to his supporters.