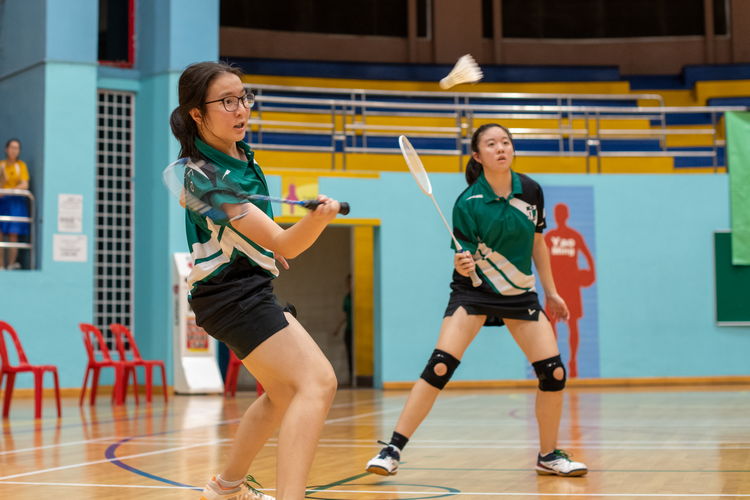 Despite the clear-cut win, RGS team captain Cleonice Lim shared that her team was actually nervous about the outcome of today’s match.

“We were very confident going into the competition today, and we were certain we would win. However, there was always this small part of each of us that was afraid we would lose today.”

RGS’ path to victory started off quickly and early, as Yu Seung Yeon of RGS secured the first point for her team in an easy win over FMS’ Jaylyn Chua. Seung Yeon won the match in straight sets 21-7, 21-6.

In the first doubles match, Stella Xiao and Ilisha Tanasekar of RGS struggled against the FMS doubles team comprising of Elicia Ng and Ng Jing Ting.

Despite Fairfield’s hard-fought lead, Raffles soon caught up and regained the lead at 15-14. Raffles won the first set with a nail biting scoreline of 21-16. The second set was a repeat of the first, with Fairfield securing the initial lead, but Raffles catching up to eventually win 21-13.

The second singles match was a dramatic fight for victory between RGS’ team captain Cleonice Lim and FMS’ Nitya Ramasamy.

Having barely secured the win in the first match with a scoreline of 21-16, Cleonice entered the second set in shambles. Nitya of FMS was securing easy points due to mistakes made by Cleonice — this however did not discount Nitya’s good play and strategic shots that helped her win the second set 21-14.

Entering the third set, RGS’ Cleonice fought with new vigour, looking to claim the game. Cleonice initially held the lead 8-3, but a series of mistakes helped Nitya catch up to 16-16.

Fighting hard, Nitya soon led the match 18-16. However, Cleonice was yet to be defeated. In a final burst of play, she fought back, winning the game just shy of a deuce, 21-19.

Speaking of her shock second set win, Nitya commented: “I already lost the first set, and I didn’t really think I was able to win. However, I knew I had nothing to lose so I just tried my best.”

“I was very happy (about winning the second set) — I knew I actually had a chance to win so I tried even harder for the next set. I was very nervous because now I had something to lose. I was very tense at the last few points, which is why I think I lost the game in the end.”

RGS team captain Cleonice explained what went through her mind during the game: “I felt that I wasn’t playing so well, and I didn’t really know what I was doing. My mind was just blank at that point. I was afraid of disappointing the team, so I tried my best not to continue with the same mistakes.”

“For me, seeing everyone cheer so hard for me, I felt extremely motivated to earn the win for the team.”

In the second doubles match, Alina Mesney Phang and Clarice Hannah Beh of RGS were up against Clara Chan and Wo Si Man of FMS. Spurred on by Cleonice’s dramatic victory in the previous match, the RGS duo played confidently.

Communicating well, the RGS girls were quick to cover each other. The determined Fairfield duo soon caught up 9-9, but a good tap by the Raffles team ensured they kept their lead. Despite FMS’ valiant efforts, RGS took the match 21-12, 21-12.

Joanna Wu of RGS ended the competition on a high note, dominating her opponent Lee Chin Mun of FMS. Chin Mun gave away easy points to Joanna with her careless mistakes, her shots frequently landing wide. With Joanna’s 21-8, 21-10 victory, RGS took all five points in the competition, sealing their zonal title.

Commenting on her team’s performance, Nitya Ramasamy (FMS) said: “The team did very well today despite the loss — they cheered everyone on even though it wasn’t looking very well for us.”

“I think we’re going in the right direction (heading into Nationals) so I hope everyone continues doing their best.”

When asked if she had anything to say to her team going into the Nationals, RGS team captain Cleonice hoped that her team would continue to keep up their efforts.

She concluded: “I think the team did super well today — everyone played their hardest. Although I myself did not play that well, I’m really proud of them.”