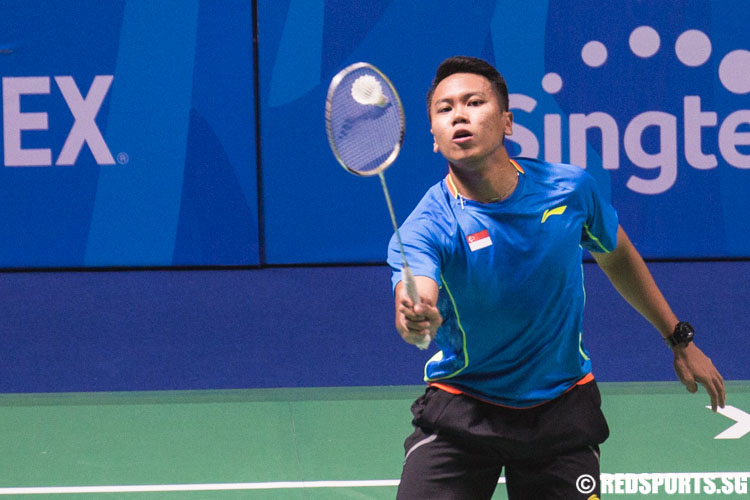 Singapore Indoor Stadium, Monday, June 15, 2015 — In the men’s badminton doubles semi-final at the 28th Southeast Asian (SEA) Games, the team of Danny Chrisnanta and Chayut Triyachart ended their campaign after losing in straight sets to Indonesia.

The duo who are ranked 17th in the world, registered a 12–21, 18–21 loss to Indonesia’s Angga Pratama and Ricky Karandasuwardi. Prior to the match, the Singaporeans had posted two victories after six consecutive losses, and so looked to continue their winning streak.

The Indonesians pulled away to a 16–6 lead early in the first set as their attacks proved to be too strong for the hosts to counter. Although Danny and Chayut managed to narrow the score deficit by pouring in six consecutive points midway through, the pair failed to go further as the Indonesians powered through to take the set 21–12.

The second set saw Danny and Chayut hot on the heels of Angga and Ricky, and though the Singapore team stepped up on their attack, it was the Indonesians who were the stronger ones with their speed and agility. In the end, Danny and Chayut had to settle for the bronze while their rivals advanced to the final after winning the second set 21–18.

“We couldn’t play as what we had planned. Our opponents played very comfortably as they played against our preferred style of playing,” added Chayut on the Indonesian pair that they had beaten last year.

When asked about what he could have done better, Danny replied: “I could’ve played more at the front of the net, but I couldn’t really get to play much in front of the net today. At the start, they led us by five (points) or so, so it was very difficult for us to catch up… we had a lot of pressure.”

This bronze marks the end for the Singapore badminton contingent. With many young players rising up the ranks, Singapore looks set to do better in the long run. “I’m happy,” commented Danny on the performance of his team, which consists of several junior athletes. “Our juniors make up a big group and include players like Kean Yew, who played very well through SEA Games even in the team event and the individual event.”

Moving forward, Danny and Chayut will now look to qualify for the Rio Olympics that will be held next year.