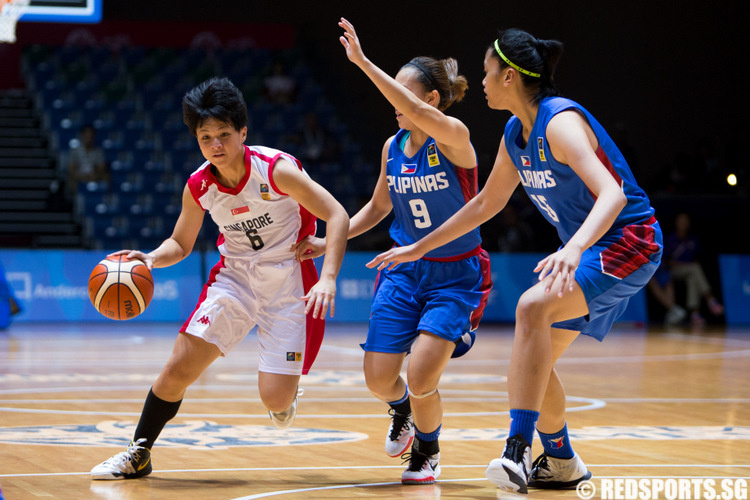 OCBC Arena, Monday, June 15, 2015 — Singapore faltered in the second half against Philippines to lose 72–82 to Philippines. With this loss, they ended their campaign with a 1–4 win-loss record to finish fifth in the Southeast Asian (SEA) Games basketball tournament.

Sharlene Li increased the hosts’ lead to 10 points at the start of the second quarter (28–18). Philippines returned two but Priscilla Han scored on a cut-in to keep Singapore’s lead in check. The hosts connected well on offensive plays to gradually increase their lead, but fumbled passes in the final three minutes gave Philippines two consecutive fast breaks and Singapore’s lead was reduced to five points (33–28).

After a time-out, Philippines forced turnovers through their full-court defence and scored easy points through them, but Lim Jia Min dropped a three to maintain Singapore’s five-point lead. Just before the halftime break, the visitors scored four points straight to trail by just one (37–38). Koh Wei Bin sat out most of the first half with four personal fouls.

“Our coach calmed us down, so we managed to recalibrate ourselves, work on what we should do, and then stay focused and get back on track. He constantly reminded us to stay focused and that the game is not over yet, so we really need to fight until the last buzzer’s out,” said Jia Min.

Singapore’s threes started falling in the third quarter but Philippines too enjoyed good finishing and maintained the one-point deficit (45–46). Singapore refused to hand the lead over to Philippines and stopped their offensive attempts several in a row.

Yukie did not let the hosts’ hopes fall and netted a three at the baseline for a 49–45 lead. Philippines returned a two but Wei Bin scored another 3-pointer after receiving a pass from Alanna Lim (52–47).

Following that, Philippines quickened their offensive pace and were just one behind (51–52). The visitors eventually converted on a fast break to take their first lead of the game (53–52), and pulled away to 56–52.

In the final minute, both teams traded baskets with Philippines taking a 60–56 lead going into the decisive final quarter. Wei Bin and Jia Min had by then registered four personal fouls each.

In the final quarter, Singapore chased the points through Yukie’s 3-pointer and Jia Min’s drive to trail 63–64 and were eager for the lead. Wei Bin passed off an offensive rebound to Cheryl, who duly converted to give Singapore a morale boosting one point lead (65–64).

That did not last as Singapore lost the lead again with six minutes to go (65–66). Philippines’ captain Merenciana was on fire, scoring two consecutive threes to help her team quickly pull away to lead 72–65.

Jia Min was undeterred and went on a strong drive to give Singapore a two, but the visitors returned one shortly after. Singapore were fighting their hearts out and made the most of their scoring opportunities but faced a low conversion rate. The hosts trailed 11 points with two minutes remaining (69–80).

Shermaine See scored a 3-pointer to put an end to Singapore’s scoring drought (72–82). Wei Bin, having four personal fouls by the end of the first half, managed to last the rest of the game with one foul left, and exited the game with 20 seconds to go.

In the final 20 seconds, Singapore locked down on Philippines’ offense but had to concede a 72–82 loss in their final game in the tournament to finish fifth.

Team manager, Chan Mei Hui said, “Our goal for the women’s team is actually bronze medal and of course we’d have liked to finish fourth. I think our performance for the previous few matches weren’t up to expectations, but I think after talking to them and being their morale booster I think they did pretty well today. I think it’s really heartening to see some of the younger players stepping up.”

“If the girls continue to stay as a team, I think we have a few younger players who’ll be able to be with us for many more editions of the SEA Games so I think this time with the experience that they had gathered, although they didn’t finish as a medal contender, it’ll do us good if we’re able to have the chance to compete again in the next SEA Games,” added the team manager.

Jia Min commented, “I think we were very focused in the first two quarters. We stayed composed and we contained them really well, and we fought really really hard on defence so we get another opportunity to attack. That was basically our strategy for today’s game.”

“This SEA Games was definitely a very good experience especially in home crowd where you hear people cheering for you. It keeps us motivated throughout the game. Every shot we make, when we score, we hear people cheering for us. It gives us extra motivation to work harder. I believe it’s a very good experience for us,” said Jia Min. “We have ups and downs, but I think we did prove that we’re actually not very far from them (the other teams). As long as we fought hard, fight for every ball, we’re not very far apart from anybody else.”