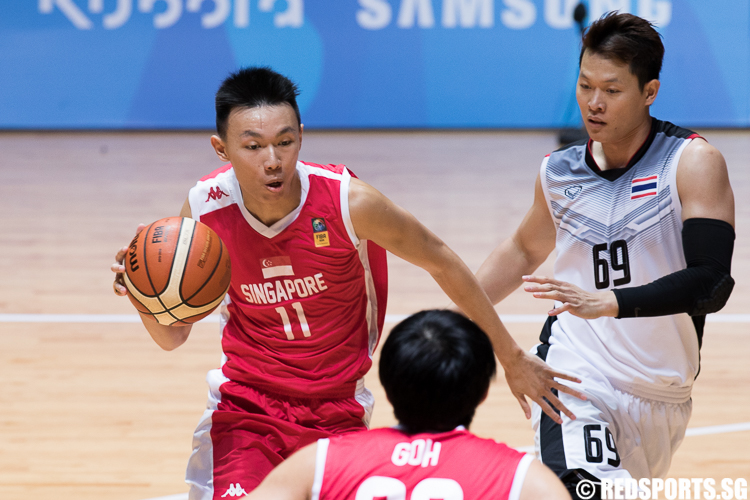 After losing the semi-final to Indonesia the night before, Singapore needed to bounce back fast to ensure it would be a historic back-to-back third-placed finishes for the Republic. Though they started nervously, they eventually were able to grind out a victory, sealing the game from the free throw line after Nattakam Muangboon (#7) narrowed it to within one at 50-49.

“We definitely felt some pressure because we were expected to beat the Indonesians,” commented head coach Neo Beng Siang. “I was worried we could not bounce back and it showed in the first half. We looked very down then.”

“I told them what’s over is over. We can’t change history. The only thing we can do is go for bronze and make Singapore proud. We played fantastic defence in the second half. They ran the floor and everyone defended as a team. That was what we needed throughout the match,” added the head coach.

Larry Liew scored a game-high 18 points, including three three-pointers from beyond the arc, before fouling out with two minutes remaining in the match. Wong Wei Long, after a dismal performance the night before, netted 13 points including two crucial free throws to ice the match.

Singapore had a nervous start to the match, failing to click on both ends of the fall as they fell behind 1–8. The home side needed someone to step up and Larry Liew answered the call. He sparked a run, scoring eight points in the first quarter as the scores were tied at 14–14 after 10 minutes.

Wong Wei Long nailed a trey to stop the bleeding before Larry hit a jumper to halve the advantage. Ng Han Bin and Larry combined to continue the momentum with treys, cutting the deficit to one at 38–39 with just under five minutes remaining in the third.

Things got nervy for the home side in the fourth as Singapore went on a scoring drought for over seven minutes. Fortunately, the Thais were unable to capitalise, and Wei Long’s three-pointer tied the game at 41–41. Singapore remained in control from there as Larry made a jumper before Wu Qing De’s dagger three increased Singapore’s advantage.

With Singapore leading by four and with 19 seconds left on the clock, Muangboon nailed a three pointer to trim the lead to just one point at 50–49. However, Delvin and Wei Long showed nerves of steel to make clutch free throws to ensure the bronze medal would remain on local shores.

In the gold-medal match, Philippines defended their SEA Games crown with a 72-64 victory over Indonesia. Philippines finish the tournament undefeated while Indonesia settle for silver.