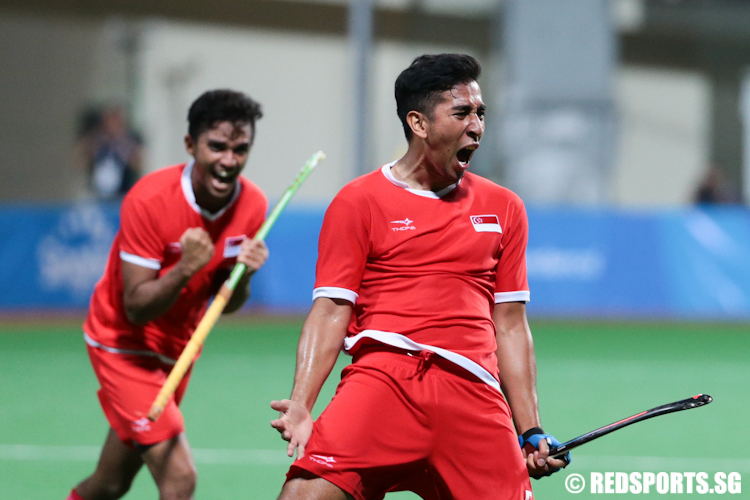 Enrico Marican (#5) celebrates after scoring a crucial equaliser against Malaysia in the dying minutes of the match. (Photo 1 © Lee Jian Wei/Red Sports)

Sengkang Hockey Stadium, Saturday, June 13, 2015 –- Singapore were defeated 4–3 on penalties by Malaysia after the scores were tied 2–2 after full time in the final of the men’s hockey competition at the Southeast Asian (SEA) Games.

The last time Malaysia were defeated in this event was in 1973, when Singapore stunned them to grab the gold on home soil.

Timothy Goh (#13) had the home crowd dreaming of a gold medal when he sent the match into a penalty shootout with a goal in the last minute of play. However, a pair of miscues to start the shootout eventually proved crucial as Singapore went down swinging.

Earlier in the group stage, Singapore lost 1–4 to the Malaysians, who fielded an under-20 national side.

Silas Noor had a great chance to score early on when he found himself through on goal, but his attempt was saved by the Malaysian goalkeeper Ridzwan Azmi.

Malaysia soon settled into the game and began to pressurise the Singapore’s backline. A series of penalty corners for Malaysia threatened to break the deadlock, but Singapore were able to defend them well. The pressure eventually paid off when Malaysia broke through a stubborn Singapore defence to take the lead. Off their sixth penalty corner of the game in the 14th minute, Najmi Farizal Jazlan (#26) fed Aminudin Mohd Zain (#23) for the goal.

Singapore attempted to restore parity with a couple of threatening runs, but nothing came close to a goal.

With less than two minutes remaining in the first half, Malaysia were awarded another penalty corner. However, goalkeeper A Suresh saved Jazlan’s shot.

Ten minutes into the second half, Malaysia doubled their lead. Azwar Abdul Rahman squeezed the ball in off another penalty corner as the hosts were left stunned.

However, not to be outdone, Singapore were soon awarded a penalty corner of their own and managed to force a diving save from Malaysia’s goalkeeper. They finally pulled one back soon after when Hafiz Abdul finished off a pass from the right wing to halve the deficit.

Singapore continued to push for an equaliser and even weathered a couple of penalty corners from their opponents. As time ticked down, it looked like the Republic’s hopes of a gold medal would be extinguished. However, with two minutes remaining, captain Enrico Marican’s surging run into the area led to a goalmouth melee, and the ball was eventually squeezed in by Timothy to tie the game at 2–2 with mere seconds on the clock.

In the penalty shootout, Singapore missed their first two attempts before the game was thrown open when Malaysia botched their second penalty. However, despite Singapore converting their final three penalties, the Malaysians were spot on as well. Azrul Abdul Rahman (#6) nailed the final penalty to give Malaysia the gold medal.

“This is a bittersweet feeling,” said captain Enrico. “We gave our all in the second half. We fought back from 0–2 down to 2–2. We are definitely disappointed but we are proud of what we have achieved today. Even when we were down, we stuck to the game plan and encouraged everyone to play for the team. That was how we scored two goals against them.”

Enrico also paid tribute to many fans that watched the match, saying, “I know hockey has these kind of fans and it just needed a match like this to bring them back. I’m so proud to be captaining the team to be on the pitch to play for all these people and I just want to shout out to the fans for supporting us. We wanted to play a good match for them. That’s all that matters to me.”