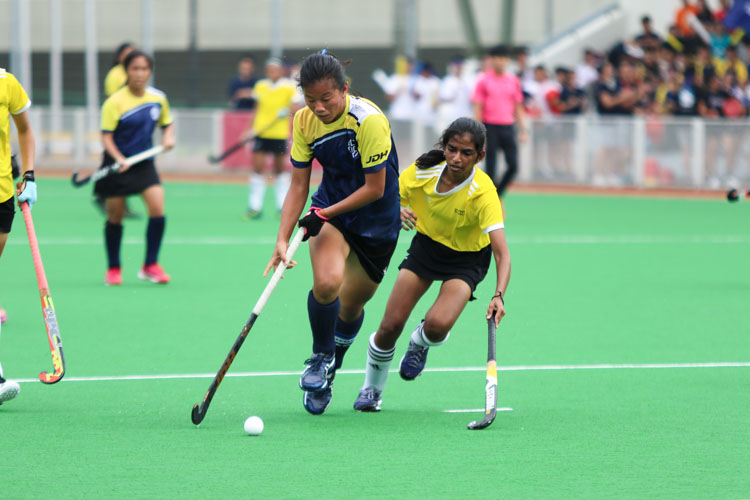 Reflecting on the game, Valerie (EJC #17) stated that her team went into the final determined to make history: “We wanted to make ourselves and everyone proud; we were ready to go all out and play beyond our best. Everyone was nervous and excited of course, but we really went out there and fought with all our might.”

Right from the start, it was obvious that it was going to be an extremely tight and gritty match with both teams going all out for the win.

As early as the third minute, EJC had their first attempt on goal. Attacking through the right wing before cutting the ball into the centre, Toh Shihui (EJC #14) found herself one-on-one with VJC keeper Sarah Wong (VJC #8) but was unable to score as her shot was blocked by the keeper.

It was a tightly-contested match, with both teams fighting equally hard to take the lead, but it was EJC who threatened more and created more opportunities to score. However, their attempts were foiled over and over again by the heroics of VJC’s keeper Sarah Wong (VJC #8) who was a steady figure in VJC’s backline throughout the match.

In the 29th minute, a short corner was awarded to EJC. The subsequent shot by Valerie Koh (EJC #17) was the closest EJC had come to scoring in the first half, but the shot still could not find the back of the net and bounced off the post back into open play. The teams went into the half tied at 0-0.

The second half began right where the game left off, with both teams intensely fighting stride to stride with each other. Fourteen minutes into the third quarter, EJC came close to breaking the deadlock after a spectacular solo effort by Phylicia Tanandika (EJC #8) saw her dribble past numerous defenders before pulling off a shot at goal — however, her attempt was denied by VJC keeper Sarah Wong (VJC #8).

Defending champions VJC had their fair share of attempts on goal as well, but EJC’s defence remained unyielding throughout the match. With both teams unable to break the deadlock, the final whistle blew indicating that the game was headed to a penalty shootout.

VJC team captain Gabrielle Lum (VJC #14) reflected on the game saying: “It was an endless fight for the champions’ title because neither team was willing to settle for silver so it didn’t come as a surprise when the game was played at such an intense pace. It was truly a gruelling hour of ups and downs, yet with the score still remaining stagnant at 0-0 throughout.”

EJC kickstarted the penalty shootout, with Maria Oshige Aska (EJC #7) stepping up to take the first shot — her effort slid past the keeper but went narrowly wide of goal. Next up was Rachel Chua (VJC #27) with the chance to give VJC the advantage, but she was unable to find her way around EJC’s keeper Deborah Lee (#3).

The next six penalty takers were also unable to find the back of the net, with both teams’ goalkeepers putting up formidable displays to keep the game tied at 0-0. That is until EJC’s captain Valerie Koh (EJC #17) stepped up to take her team’s fifth penalty.

Valerie recounted the experience, saying: “When I was moving to get the ball — which was coincidentally right in front of our supporters — I looked up and just seeing the sea of blue cheering for us was so heart-warming. Rather than feeling overwhelmed, I felt so encouraged and strengthened. There was little going through my mind except ‘I will score’. That was my mantra and it filled me with composure and confidence to take that final shot.”

The air was thick with anticipation and the crowd was on their feet as Valerie dribbled the ball towards goal. She dribbled the ball slightly towards the left of the goal before switching to the right to take her shot — a low shot that went just below the keeper’s reach and found its way into the back of the net, giving EJC the advantage.

VJC still had a chance to level this game up as Mylsamy Boojha Rukmi (VJC #2) stepped up to take her penalty, but her attempt on goal was decisively thwarted by EJC’s keeper Deborah Lee (#3) — sending the stadium into a frenzy as this meant that EJC had entered the history books and successfully ended VJC’s 16-year stranglehold of the title.

This is only the third time that newly-founded EJC has taken part in the National A Division Hockey competition. Their team, comprised of 10 players from CHIJ St. Nicholas Girls’ School — who placed second, third and fourth in the B Division championship in 2016, 2017 and 2018 respectively — accomplished an incredible feat of keeping a clean sheet throughout the entire competition.

The victorious captain Valerie (EJC #17) praised the efforts of her team, adding: “All the hard work — late training nights, weekend matches and gruelling PTs paid off! To achieve this moment in history, everyone played a critical part and everyone deserves this win. The championship title we fought so hard for is finally ours and I’m so proud of everyone. It is my honour to have been a part of this team as not only a player but as captain.”

Despite the loss, the VJC girls put up a commendable performance showing grit and spirit all the way to the penalty shootout. Although the defeat was definitely disappointing, captain Gabrielle Lum (VJC #14) remained grateful for the journey her team had taken together.

To her teammates, she wanted to end off the season by saying: “Thank you for teaching me what it means to be resilient by being the true embodiment of it. I had the privilege of witnessing each one of you grow from strength to strength, and I really can’t express in words how special this experience has been for me. I will always be grateful to have closed this chapter of hockey together with this very team.”