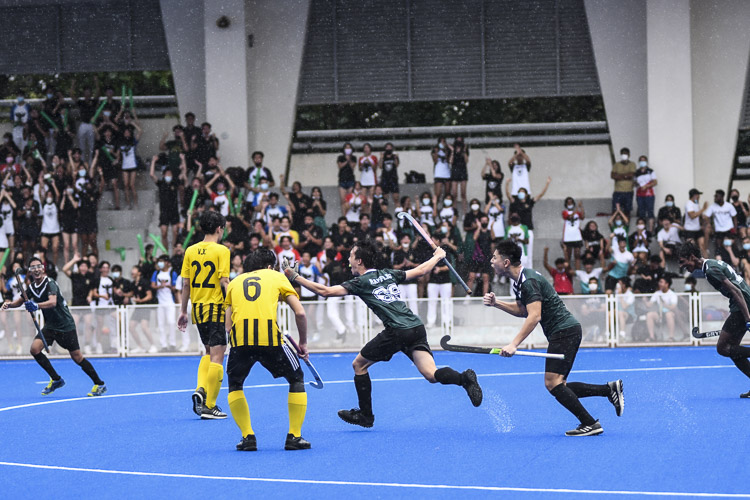 Kiefer Lee (RI #69) celebrates after scoring his team’s second goal in the final. RI beat VJC 2-0 to clinch their eighth title in the last 10 editions of the championship. (Photo 1 © Iman Hashim/Red Sports)

Sengkang Hockey Pitch, Wednesday, May 25, 2022 — Under an endless drizzle on a slippery pitch, the boys from Raffles Institution (RI) retained their school’s longstanding hockey legacy after seeing off Victoria Junior College (VJC) in the A Division final, securing the school’s eighth title in the last 10 editions of the championship.

This time round, the boys in green overcame the Victorians’ challenge with a 2-0 win as they concluded their commanding showing across the competition with a blotless record over five games, scoring a total of 26 goals and conceding zero en route to lifting the champions’ trophy.

“I feel really, really happy,” said Raffles captain Hiren Koban (#10), who assisted both his team’s goals in the final.

“We worked so hard for this, and it was finally a dream come true. We played with a clean sheet throughout the whole season… how we controlled the game, how we worked together as a team, it’s an amazing feeling.”

“We worked very hard, each batch, every single year, and it’s something we want to uphold for a long, long time,” he added, referring to the school’s dominance in the sport.

VJC, though, were by no means pushovers, reaching the final with a similarly domineering 25-goal tally over four games, with the two goals conceded against RI the first ones they had done so all season.

Played in four periods of 12 minutes each, the final took awhile to provide fireworks as both sides tried to get accustomed to the wet surface. The Rafflesians were superior in possession, and their persistence finally found a tangible reward with 2 minutes 52 seconds to go in the opening quarter.

After some good midfield work to move the ball swiftly past the offensive 23-metre line, captain Hiren’s strike was parried by the VJC goalie before Daniel Xu (RI #5) slapped the rebound in.

“I couldn’t believe it until a few seconds later when I saw the crowd… I was super happy.”

RI continued their control of the game in the second quarter, but the Victorian defense stood their ground and repelled every onslaught that came their way to maintain the deficit at one.

The Rafflesians finally doubled their lead with two minutes to go in the penultimate quarter, as another ball swept by Hiren (RI #10) into their shooting circle found Kiefer Lee (RI #69) one-on-one with the VJC ‘keeper, and he duly hit it hard into goal.

RI had opportunities to extend their advantage just seconds into the last quarter with two short corners in succession, but VJC did enough to keep the score modest until the final whistle.

“Our expectation was to win, and the pressure was on us to win,” said RI skipper Hiren. “Luckily, we didn’t crack under pressure, and we performed really well.”

Having played with most of his teammates since five years ago in the school, Hiren attributed the team’s success to a strong togetherness within the squad.

Brushing off his two-assist contribution in the final, he said: “It’s always nice to be on the scoresheet or make an assist, but I think we came in here not thinking about any individual play.

“If anyone scores, it’s the team’s goal, it’s everyone’s goal.”

VJC captain Dillon Lee (#10), meanwhile, credited his team’s performance throughout a challenging season where they had to transit from a 5v5 format just weeks before the competition as the nation eased Covid-19 safe management measures.

“I think we could have played much better, but I think we fought till the end and that’s what I’m proud of,” said the former Victoria School student.

“NSG wasn’t confirmed until the very last minute, and given how we only had a short period of time, I think we did very well and we did the best that we could.”

“I’m very proud of my team at the end of the day,” added Dillon.