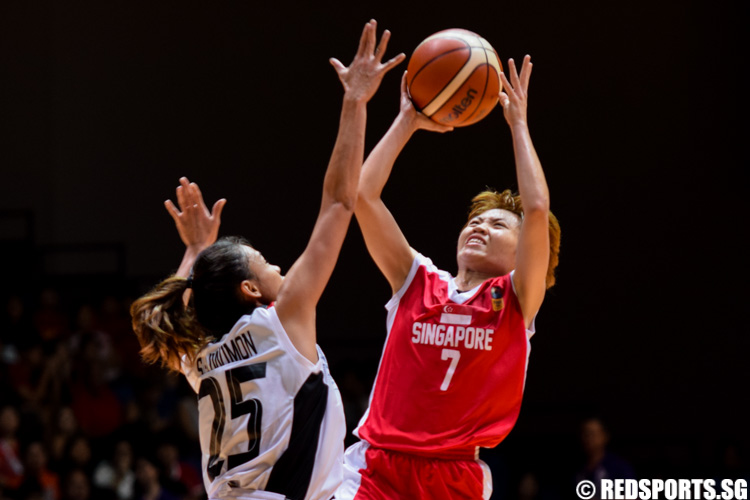 Poor shooting percentage and turnovers proved to be Singapore’s downfall. They attempted 42 three-pointers and made 10 of them, while attempting just 27 from inside. They shot 25 percent from the field.

“I think the girls are quite fatigued after their hard-fought match against Indonesia,” commented team manager Chua Mei Hui. “We could have done a lot better but unfortunately, none of the players were able to rise up to the occasion. We did not find our shooting range today. I guess the shooting percentage let us down.”

It was clear from the tip-off that Singapore would depend on outside shooting to put points on the board. However, they made just four three-pointers from 14 attempts as they found themselves trailing 14–19 after the first 10 minutes.

The next quarter was when Singapore fell apart. Careless turnovers midway through the quarter opened the door for Thailand to extend their lead as they went on a 12–0 run. At the other end, Singapore were scoreless for eight minutes before a rare layup stopped the bleeding. Still, Thailand took the second quarter 20–4 for a 39–18 lead at the break.

Singapore started the third quarter with a pair of threes as they attempted a comeback. The Thais, however, were flawless with their shots, with their inside game particularly strong. They led 59–33 heading into the final quarter where they continued to dominate and extend their lead, eventually finishing 83–46 victors.

Singapore will next play Malaysia, bronze medallist of 2013, on Saturday, June 13, 8pm at the OCBC Arena.