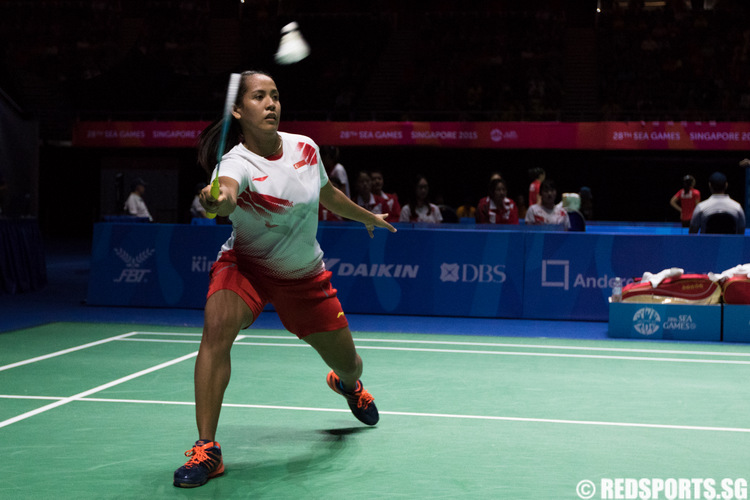 Singapore Indoor Stadium, Thursday, June 11, 2015 — Singapore failed to make the women’s team badminton final after losing 0–3 to Thailand in the semi-finals at the 28th Southeast Asian (SEA) Games. The team settled for joint-bronze together with Indonesia, while Thailand and Malaysia advanced to the final.

Thailand are the SEA Games defending champions after emerging top in the 2011 edition. Badminton team events were not featured in the 2013 SEA Games.

The Thais were clearly the stronger team on paper, but the Singapore team managed to give their opponents a strong fight. The line-up featured four Games debutants – Grace Chua, Tan Wei Han, Elaine Chua and Ong Ren-Ne.

In the first game of the afternoon, Singapore’s Liang Xiaoyu lost in straight sets (17–21, 14–21) to Thailand’s top women’s singles player, Ratchanok Intanon, who is ranked sixth in the world. Xiaoyu, not intimidated by a player ranked 95 places above her, drew first blood.

Capitalising on Ratchanok’s errors at the net, Xiaoyu went 11–9 up in the first set. But a combination of awry shots, as well as strong attacking play by Ratchanok, saw Xiaoyu eventually lose the first set 17–21.

Ratchanok continued her dominance in the second set, scoring five unanswered points right from the re-start. Buoyed by the Thai supporters who were much noisier than the 300-strong home crowd, Ratchanok took the first match 21–17, 21–14.

The new pairing of Vanessa and Shinta had lost their two previous encounters with the Thai pair and once again, the Thais overpowered the Singaporean duo 21–12, 21–18 to improve their head-to-head record to 3–0.

Said Shinta on losing to the Thais for the third time: “I felt that this was our chance to beat them, especially since we are playing on home ground. But we did our best already. In the second set, for the last few points, we made a simple mistake and we are not as steady as them.”

Vanessa agreed, saying, “We played twice against them, so we were supposed to open up the game and create more rallies, and try to find a chance to attack. But there were a few points where we got impatient and towards the end of the game, we couldn’t capitalise even though we were leading by three points. The last part, we made a few simple errors and that caused the turnover.

“For me, I feel quite disappointed. I hoped to put up a better fight than this. Definitely, I also would want to win a point for the team, but the Thais played well today and we didn’t play up to our expectations, so we lost the match.”

She gave Busanan a tougher fight in the second set, even leading 11–9 at one point. However, the Thai proved to be too strong, winning the last set 21–15 to move on to the final at the expense of Singapore.

Despite the loss, Grace was pleased with her performance, saying, “She’s ranked higher than me in the world rankings, so I knew it was going to be a tough fight. But still, I just tried my best. When I was leading, I just continued to believe that I must fight throughout. Even though I didn’t win, I think I put up a good fight and I hope everyone enjoyed the match.

“I could hear everyone cheering for me, and even though my first set I lost quite badly. I am very thankful that everyone continued to support me and I think this gave me a lot of motivation to play well for them and play well for Singapore.”