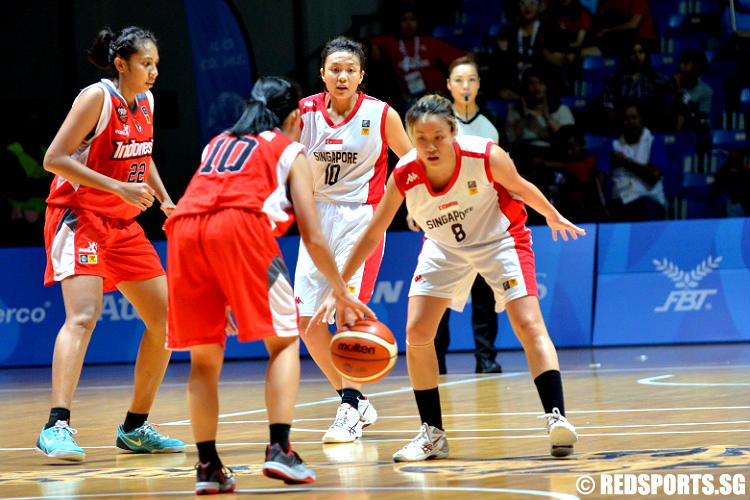 OCBC Arena, Wednesday, June 10, 2015 — Singapore now hold a 1-1 win-loss record after they were defeated 67-70 by Indonesia in their second match of the Southeast Asian (SEA) Games.

They were unable to continue the good work from the previous night and shot poorly, managing just 27% from the field. Captain Lim Jia Min scored 18 points for her team while Jayne Tan, who exploded with 32 points the night before, managed just 11 in this encounter.

“We went very close to taking the match,” said team manager Chua Mei Hui. “Today’s shooting was not as good as last night’s. There’s nothing we could do about it because our girls did their best. It is definitely disappointing, but winning and losing are part of the sport. The team will deal with it well.”

Indonesia accumulated a swift 14-5 lead midway through the first quarter as the host defence struggled to contain their visitors. Unlike the previous night where Singapore hit 13 three-pointers in the first quarter, Singapore’s shots failed to fall and the result was a 23-10 deficit by the end of the first period.

Singapore were held scoreless in the first 3:30 of the second period as Indonesia extended their lead. However, the host tightened their defence and were able to close the gap. The third quarter was where they cut the lead down to five at 42-47 with five minutes remaining, with a comeback looking firmly on the cards. Not to be outdone, Indonesia stormed back, ensuring they took a double-digit lead into the final period at 57-47.

The final period however, belonged to Singapore. Led by captain Jiamin, the host gradually trimmed the deficit. After nailing a couple of three pointers and putting in a number of defensive stops, Singapore pulled to within just three points at 67-70 off a Sharlene Li three-pointer. Singapore were unable to convert their chances in the dying minutes though, as they missed three shots from beyond the arc in a row to let the Indonesians take the victory 67-70.

“For the first two quarters, I felt our defense wasn’t good enough,” said Jia Min. “From the third quarter, we focused on defense, and that allowed our offense to flow. We really wanted to stop them from scoring because that would give us more chances to attack.”

“At the end, we were trying very hard. We really wanted it and did our best, but the shots didn’t go in. We will just work harder for the next game. Because we lost the way we did, we will fight back harder,” declared the 24-year-old.