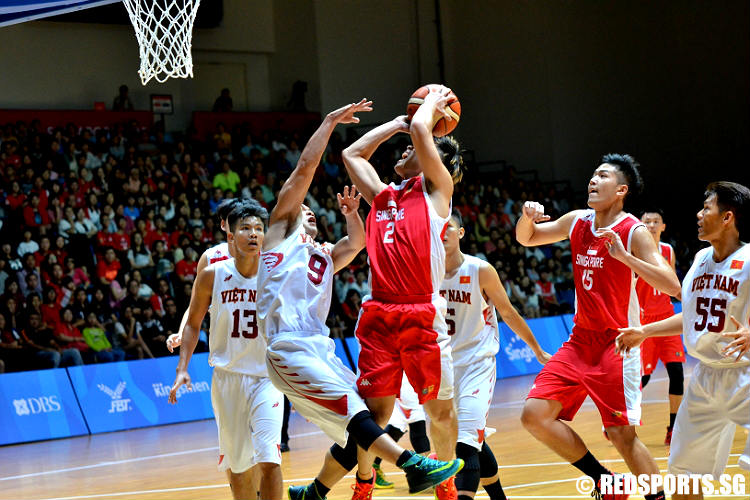 Desmond Oh was the key man for Singapore as he scored 17 points while making a couple of good defensive stops. Lim Shengyu had 14 points with Delvin Goh adding another 12 points for the home side.

“I am quite happy with my performance today,” said Desmond. “Hopefully, we can bring this intensity to the next match and do what the Singapore team do – run hard, fight hard and defend hard!”

However, it was the 1.78-metre Desmond Oh who stood the tallest, leading Singapore in the first quarter by scoring 10 points to give Singapore an early double-digit lead.

The Vietnamese were unable to hold off the Singaporeans, who dominated the match. They led 23-9 at the first quarter and 47-15 at the half. Delvin Goh performed magnificently as his inside presence was too much for the visitors to handle, with his rebounding and defence kept Vietnam’s scoring to occasional baskets.

The match was over as a contest by the half, and Singapore took their foot off the pedal in the second half. Vietnam were able to trim the lead and net a couple of field goals, but Singapore’s victory was never in doubt.

Coach Neo paid tribute to Desmond for his performance, saying, “We need players to come in, give good minutes and take a seat while others do the same. Desmond did that today. He scored 10 points in five minutes then did the same in the third quarter.”

Despite the win, coach Neo hoped his charges would maintain the intensity throughout the match.

“Today we came off a bit sloppy,” said coach Neo. “In the last quarter, we lost to them as well. I wanted to see how it is like to play two big players. They dominated the post because of their size, but we needed more energy from them. In our next match, it’ll be a tougher challenge against Cambodia because they have two American bigs. We need to do our best against them.”