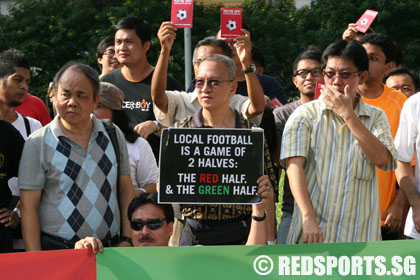 Hong Lim Park, Saturday, June 5, 2010 — About 200 football fans decided to make their voice heard at the Speakers’ Corner yesterday afternoon to voice their unhappiness over the pricing of the World Cup packages announced by StarHub and SingTel. They were unhappy about the near seven-fold increase in the pricing of the package as compared to the World Cup four years ago.

A Facebook group was created soon after the announcement of the telcos’ package and has attracted approximately 27,000 fans so far. A few members of the group decided to carry out the idea of a fans’ gathering at Hong Lim Park and the idea came to fruition within a week.

“I felt really strong about standing up against this because a lot of money and effort has been put into this World Cup broadcast bid,” said Andy Tan, the main organiser of the gathering. “I feel the need to voice out the concerns of Singaporean football fans.” The 36-year-old works as a creative director.

“It’s not really a matter of money, but it’s more a matter of principle. There’s a lack of transparency in how both telcos handle this matter,” commented Andy. “Currently there is this imbalance between free-to-air TV and paid TV. I hope with this show of unity, it will make the telcos think twice before bidding for the next World Cup at such a high price. The success is not in the number of people who turned up today, but in the future World Cups to come.”

The fans turned up in specially-designed T-shirts that showed the message “You’re Off! Show Telcos the Red Card, I Choose Not to Subscribe”. They also signed a petition, pledging not to subscribe to the World Cup packages and held discussions about the alternative ways of catching the World Cup.

“It is good to see someone stepping out to let our voice be heard as many of us are just passive observers,” shared Mr KJ Tan, a 33-year-old web developer. “I don’t deny the rising costs of living mean we have pay more for entertainment. However the two main issues here are the transparency and Singapore’s TV market.”

“Firstly, the telcos have to show us it is unavoidable for them to raise their prices by showing us the exact figures of the bid. Secondly Singapore’s TV market is too small to sustain two paid TV telcos. In order to watch quality content, Singaporeans are forced to get both set-up boxes which is not very reasonable.”

A couple of other football fans also took their stand on the issue.

“Although there’s not a lot of people present today, it’s a matter of coming over and showing our unity about this,” said Alan, a IT developer who is in his 40s. “I will look for online streaming to view the games!”

“This is about corporations versus the masses,” said a football fan who only wants to be identified as Mr Koh. “By bidding for the World Cup at such a high price, it is denying a part of the Singapore’s population the chance to watch the games,”

“There are many places offering free World Cup broadcasts e.g. the coffeeshops, the community clubs, so I guess I will go there to catch the games!” the middle-aged civil servant said when quizzed about what are his alternative ways to watch the World Cup.

The 200-man gathering finished with a finale called the Red Card Wave where all the fans gathered together in unity to flash the ‘Red Card’ in a Mexican-wave motion.

The creator of the group, John Chua, was not present, citing work commitments.

So what led him to start the group on Saturday May 8th?

Said John: “I woke up on Saturday morning and opened a text message from a friend about the world cup prices. At first I thought it was a wind up, then I realized he was not joking and I thought, ‘I can’t be the only one thinking this is a rip off.’

“Then reading about the $1 coffee comment confirmed that a boycott was the right thing to do for all the fans. This led me to creating the FB group after discussing it with some friends who helped spread the news as well.

Edward Ying, SingTel’s chief of content and media services, was quoted in media reports as saying, “At $66 (before GST), subscribers will be paying about $1 a game to watch in the comfort of their homes. I think it is reasonable – less than (the price of) a cup of coffee to watch each live game.”

“As for why we all need to be very strong in standing up against this world cup pricing, it’s very likely they will continue raising the prices if we don’t vote with our wallets and end up rewarding them for such overpricing with no good reasons in place,” commented John.

Did John even think his group would hit such high numbers?

“Yes, and no. I believe the majority to feel the same way but i didn’t anticipate such a energetic response and collective vibe by everybody. The responses from everybody has been great with alot of creative comments and witty photos about the 2 telecomms. When you see the amount of questionable elements of this whole fiasco, it’s quite staggering why the MDA is not looking into this,” said John.

“If you ask me why the group is growing so fast, i would say it’s because everybody is catching on that something is wrong here, something is not being told to us.

“Firstly the lack of justification about the price hike. There’s none that they can give us.

“Example — We are expected to be paying $94 for it when our regional neighbors are paying $10 (Japan) $7 (India) Free (Indonesa, Vietnam) for the broadcast. Even England is getting it free, they don’t have a “hot” football market?

“If SingTel and StarHub are pointing the finger at FIFA , then first StarHub and SingTel have to explain the massive price differences between us and other countries who also got the deal with FIFA.

“Secondly, a reported increase of the fee from 15m to 21m resulted in a such a big increase that the numbers don’t add up.

“Lastly, why are SingTel asking us to ‘support’ them when they just reported $3.9 billion profit last year?”

To find out more about the gathering, you may join ‘Mass Boycott Starhub/Singtel Overpriced World Cup Package’ Facebook Group 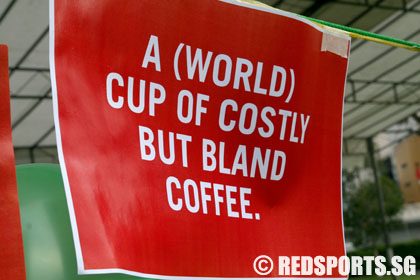 Consumers were told that with the price offered by the telcos, each match was around the price of a cup of coffee. That left quite a bad taste in the mouth of these protesters. (Photo 2 © Koh Yizhe/Red Sports) 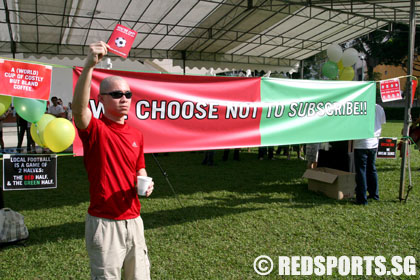 Football fan Mr KJ Tan shows his support for the event, waving a red card and holding a cup of coffee. Free coffee was given out at the event. (Photo 3 © Koh Yizhe/Red Sports) 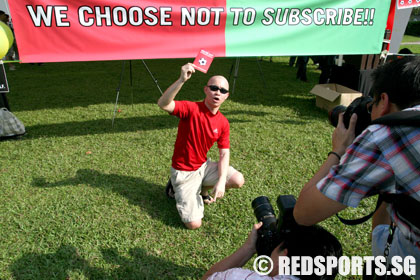 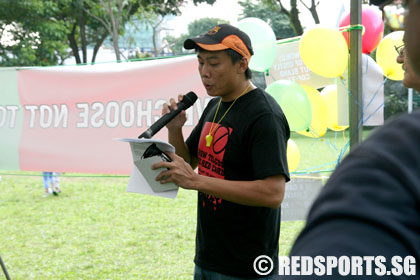 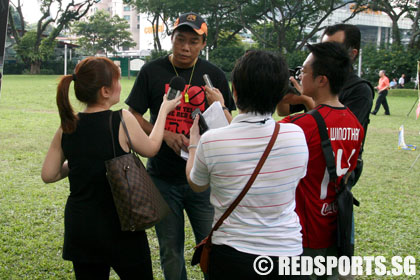 The media were well represented at this event, with Andy constantly being surrounded for interviews. There were about 20 persons from various media organisations. (Photo 6 © Koh Yizhe/Red Sports) 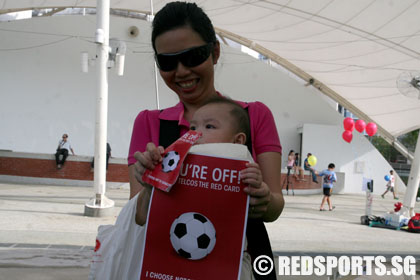 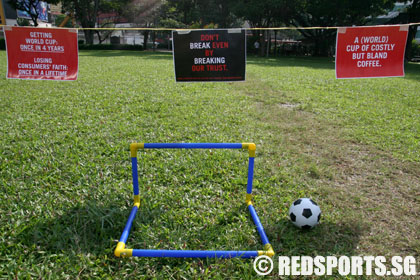 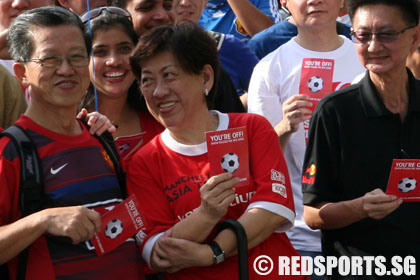 A couple shares a joke while waiting for the wave to start. (Photo 9 © Koh Yizhe/Red Sports) 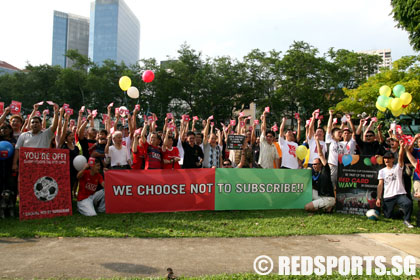 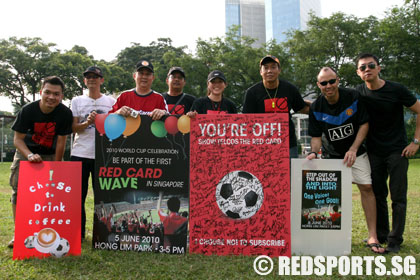 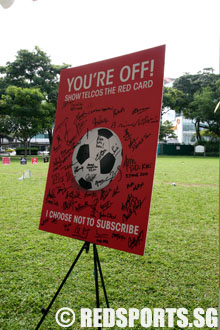 “You’re off!” A big signboard where football fans pledged not to subscribe for the 2010 World Cup packages by SingTel and StarHub. (Photo 12 © Koh Yizhe/Red Sports)