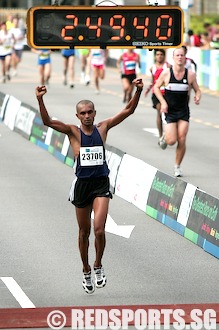 The Padang, Sunday, December 7, 2008 – Murugiah Rameshon came across the finish line of the Singapore Marathon in 2 hours 49 minutes and 37 seconds to reclaim the mantle as Singapore’s fastest male marathoner.

Daniel Ling, who was Singapore’s fastest male marathoner last year, finished second behind his mentor and training partner in 2:54:54.

Rameshon, 44 on December 31st, is the current record holder in the marathon. Rameshon's record of 2:24:22 set at the South East Asian (SEA) Games in Chiangmai, Thailand in December 13, 1995, still stands to this day.

“At this age, 43, I just want to see how fast I can go,” said Rameshon, who stopped running competitively for 10 years after setting his record.

“We were running together for the first 7km,” said Rameshon of Daniel and himself. “Then I realised that Ramesh (another strong runner) was in front. I told myself to keep him in sight, stay a minute away, but able to see him.”

“Somewhere around the 20km mark, I realised I was running faster (than Ramesh) and so I wanted to go faster than 4 minutes per km.”

Daniel Ling, 31, had a mentally draining time, running with an illio-tibial injury.

“I was injured with itb syndrome two months ago, a training injury. At 14km, I was caught by the second pack. I ran with Mr Ram until 10km. Then he was on his own. I tried to step up the pace to to catch up with Mr Ram, but he was still 2-3 minutes in front of me.”

At 21km, Daniel was only 200m behind Rameshon. By the 34km mark, Daniel and Ramesh had dropped off Rameshon’s pace, and trailed by about 1km.

Continued Daniel, who teaches at Hwa Chong Institution: “Around 14km to 16km, Dr Ben (Tan) was in front of me. I decided to pull away from the second pack. Dr Ben was running separately. From 21km onwards, I was third. I was trying to catch Ramesh who finished third last year. I did not see him until 32km. After i passed him at the 33km mark, he started walking. I think he has some sort of injury. From then on, I was trying to catch up with Mr Ram.”

“I was very happy I could finish the race despite the injury. I almost decided to quit because i was getting slower and slower but Dr Ben Tan encouraged me, ‘You can do it!'”

Daniel, who hit 2:49 in the 2008 Berlin Marathon, even contemplated not running the Singapore Marathon, but Rameshon said: “I told Daniel, just run. You might even come first. So unpredictable, the marathon.”

Rameshon now has his sights on a new goal. 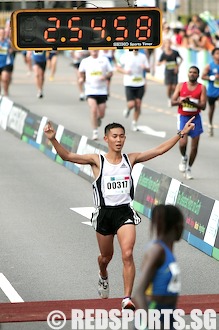 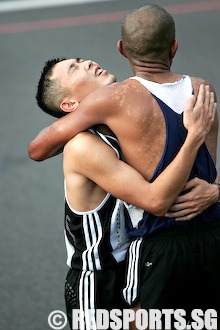 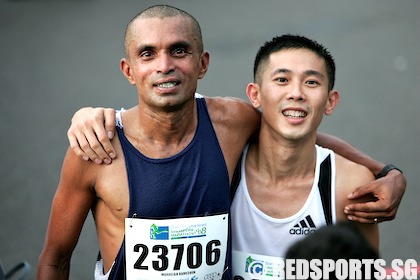