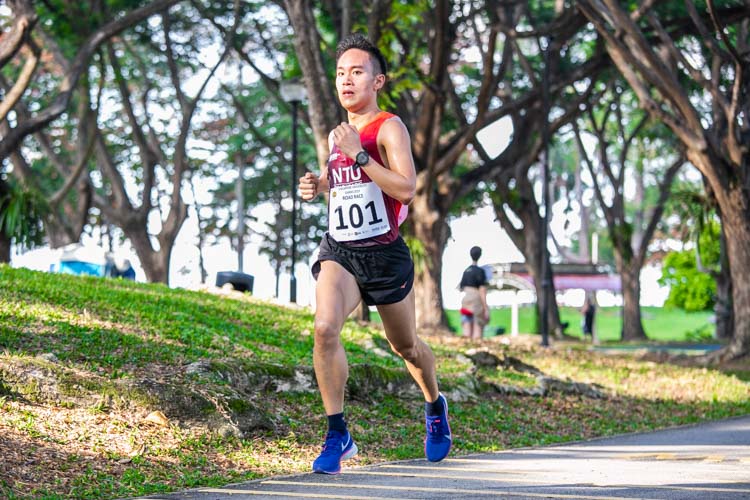 Aaron Justin Tan (#101) finished second in the Men’s race with a time of 19:06 over the approximately 5.8km route to lead NTU to their first SUniG team title in eight years. (Photo 1 © Iman Hashim/Red Sports)

West Coast Park, Saturday, October 5, 2019 — After a seven-year winning streak of the Men’s team title in the Singapore University Games (SUniG) Road Race, the National University of Singapore’s (NUS) dominance came to an end as Nanyang Technological University (NTU) sprang a surprise victory by a margin of two points.

The narrow fight between the two schools saw their runners claim all but one of the top 10 individual places, the sole exception being Singapore University of Technology and Design’s (SUTD) Jack Ng in ninth place.

The pecking order was determined halfway through the race, as NUS’ Mitchell Basher, an exchange student, pulled away and claimed a comfortable victory with a time of 18 minutes 51 seconds over the approximately 5.8-kilometre race route. His teammate, Year 2 Economics student Shohib Marican, dropped to fourth place. Sandwiched between them were NTU’s Aaron Justin Tan and Tan Wei Jie in second and third respectively.

The odds seemed stacked against NTU at first as Aaron and Wei Jie had limited time to prepare for the Games given their marathon training commitments.

“Wei Jie and I did not plan to race SUniG. It was a last minute thing, and we did only about one or two race-specific training sessions. We were riding on our progress in our marathon workouts, which have been going well,” explained Aaron, a Post-Graduate Diploma in Education (PGDE) trainee in NTU’s National Institute of Education (NIE).

However, Aaron and Wei Jie managed to turn this drawback to their advantage, making up for the lack of physical preparedness with stronger mental resilience built up from months of marathon training.

“Our marathon training helped us focus better. During the race, the only thing on my mind was how short this distance is compared to a marathon. Wei Jie and I have done intervals such as 7x3km and 5x4km, so the race distance here is akin to just one interval,” explained Aaron.

“Mentally, this allowed us to manage better, especially in the second half of the race when the pain kicks in, as we knew that it would be a relatively short time to the finish line.”

NTU were further aided by an overall seniority in its runners. Of its four scoring runners, two — Aaron and Darren Chong (7th) — are PE teacher trainees at the National Institute of Education (NIE), while Wei Jie is a PhD student. The sole exception is Koh Zuo Hong (5th), currently a Year 4 undergraduate. All four train together under the ActiveSG Athletics Club training programme.

“Having more years in running might have been one of the factors contributing to the team victory, as we were better able to handle pressure. For me personally, I have been able to manage my time better, despite added commitments compared to my undergraduate days such as work, in addition to lessons and training,” Aaron reflected.

Interestingly, Aaron was formerly a member of NUS’ Cross Country team during his undergraduate years at the school’s Faculty of Arts and Social Sciences (FASS), though the last time he competed in SUniG was in 2015 as he took a two-year hiatus in Years 3 and 4 due to difficulties in maintaining the needed amount of rest.

On how the running scene has changed over the years, Aaron pointed out that the standard has improved a lot.

“In 2016, only two individuals went below 20 minutes. This year there are six, five of which are locals. It’s good to see the running scene getting stronger, especially among the younger runners,” he said.

Meanwhile, the Women’s race went according to script with NUS’ Vanessa Lee and NTU’s Nicole Low, both Year 3 students, coming in 1-2. Vanessa’s teammate, Year 1 student Toh Ting Xuan, came in third after sticking to Vanessa and Nicole for the first half of the race.

NUS claimed an easy team victory as NUS followed up with Levyn Wong in fourth and Tan Hui Xin in fifth, giving them a near-perfect score of 13 points (10 is the lowest possible score) to secure the team title against NTU’s 34 points.