“No drinking, no alcohol, no smoking, no late nights” – an interview with Aleksandar Duric (Part 5) 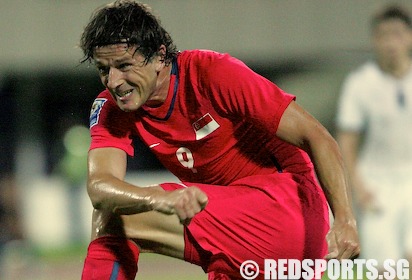 Aleksandar Duric is a Serbian who became a Singapore citizen in 2007 and within weeks he was wearing the red of Singapore at the National Stadium. Duric got his papers the hard way – he applied like everyone else and was rejected twice before he got approval. He was not on the Football Association of Singapore Foreign Talent Scheme, as most folks would assume. Today, at age 38, he is still a first-choice striker for Singapore, an amazing situation for someone his age. He remains one of the fittest players in the S-League where he plays for the Singapore Armed Forces, a testament to the professional that he is. But there is more to Aleks than just football. In his 38 years, he has experienced poverty, the loss of his mother to war and years of separation from his family because of the Balkans conflict. He sat with us for hours one day to chat. Here is his story.

The road to success
In 2001, Aleks played his first full season in the S-League as a striker with Geylang United. Having never played as a striker professionally in his life, he scored an astonishing 37 goals and Geylang won the title that year. That performance led to a 3-year contract with Geylang, during which Aleks would become one of the most prolific scorers in the league, keeping his team in the top three positions. It was also during that period that his daughter Isabelle and son Alessandro were born.

In 2003, Aleks scored his hundredth goal in the S-League, and his two hundredth goal in 2007. He was only the third player in Singapore league history to achieve either milestone. His move to SAFFC also helped the team clinch double honours in 2006 – S-League and Singapore Cup champions. For his achievements, Aleks was named Player of the Year in 2007.

Aleks attributes his success to hard work and discipline. "You must be willing to sacrifice yourself – no drinking, no alcohol, no smoking, no late nights. If you want to do that, you will never go far." It is the reason that Aleks, despite being one of the oldest players in the League, has remained one of its fittest and strongest.

"I see a lot of talents in Singapore," says Aleks, "but they will sit in the coffee shop until 5am. They get fat so easily. They think about girls and everything else first. The last thing is football. In my way, football should be on top."

Singapore, his country
Aleks eventually decided to become a Singapore citizen. "Singapore is the only country where I stayed for a long time," said Aleks. "It's the longest place I've ever been after my hometown. I feel myself part of Singapore. All my true friends, people I know, are here."

Singapore feels like the Yugloslavia Aleks grew up in in one important way. "It's a multi-ethnic country and everybody respects everybody,” says Aleks. “From a young age, I mixed with other religions. My neighbours were Muslims. We never thought about it until the war started. Their parents worked in Germany so my mother raised them with us."

When Aleks finally got his Singapore passport, he was delighted. "Even happier than when I got my Australian passport," he says. He received letters from friends and neighbours, and people would thank him. Aleks even recalls senior citizens in Ghim Moh coming up to him saying, "This is the kind of people we need in Singapore."

It seemed perfect recompense then, that in his debut game with the national squad in October 2007, he would score two goals against Tajikistan, advancing the Lions to the next round of the World Cup for the first time in Singapore's history.

Recipe for success
Aleks' daily routine involves over two hours of training – gym work in the mornings and ballwork and running in the afternoons. Most days he also cycles his kids to and from school – about 8km in total. His discipline extends to sleep and food. Aleks is usually in bed by 10 pm every night and up by 6am, and he avoids chilli and fatty foods like prata and chicken rice.

In Aleks' world, there are no shortcuts to excellent performance. "If you train well, you play well. If you skip training, if you don't give 100% in training, you won't be able to play well."

“I'm a man who wants to do my best, to do things to perfection,” said Aleks. It’s a defining trait that goes well beyond football. “I am very neat,” Aleks revealed. “In the hotel room, I need everything in order. Shampoo is here, conditioner is here. My teammates ask me what am I doing.”

We chatted with Aleks about a wide range of issues, and here is some of what he had to say:

On losing loved ones to ethnic war
“My mom was killed by people from a different religion. But I don't hate anybody. It's not worth it to think that way. Keeping the anger doesn't go anywhere. You can't judge people you don't know.”

On the Youth Olympic Games
“I don't think the people realise yet what they've got. The closer you come to 2010, the more you'll see what it's about, what the buzz is like. When people all over the world come, it's just amazing. It will be one of the best things to happen in Singapore. If you're a local athlete competing in front of your own countrymen, if you usually give 100%, you will give 300%.”

On sportsmen he admires
“Mohammed Ali. Because he came from a poor background. He always gave a good fight, and entertainment. In soccer also, you fight, and you entertain. If you don't entertain, people don't come back. David Beckham is a true professional. As a kid, all he thought about was football. His target was to play for the country. He never drinks, never take drugs. He's a family man.”

On the person who most influenced him
“Definitely my dad, in the way he brought us up. He was a strict man. We of course didn't agree on many things. But now you grow older you realise. And with his small money, he built this huge house and left it to us. And he was still raising us at the same time.” 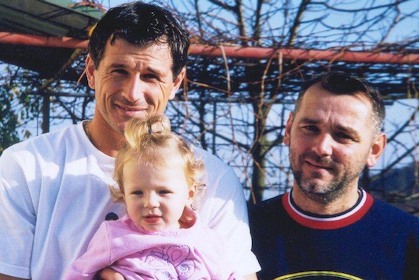 Aleks, holding his 15-month-old daughter Isabella, with his brother Milan, outside the house their father built at the end of 2003. (Photo © Aleksandar Duric)

Related stories:
Part 1 – “Sometimes we played with no shoes…”
Part 2 – “If your brother is killed, at least I have you.”
Part 3 – "Once you step out on the field, no more crying."
Part 4 – “Are you sure they play football in Singapore?”