“Are you sure they play football in Singapore?” – an interview with Aleksandar Duric (Part 4) 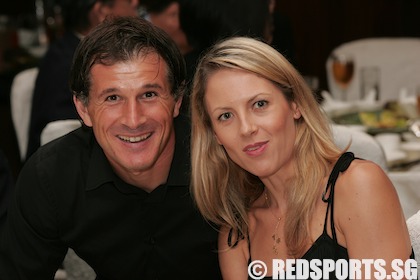 Aleksandar Duric is a Serbian who became a Singapore citizen in 2007 and within weeks he was wearing the red of Singapore at the National Stadium. Duric got his papers the hard way – he applied like everyone else and was rejected twice before he got approval. He was not on the Football Association of Singapore Foreign Talent Scheme, as most folks would assume. Today, at age 38, he is still a first-choice striker for Singapore, an amazing situation for someone his age. He remains one of the fittest players in the S-League where he plays for the Singapore Armed Forces, a testament to what a professional he is. But there is more to Aleks than just football. In his 38 years, he has experienced poverty, the loss of his mother to war and years of separation from his family because of the Balkans conflict. He sat with us for hours one day to chat. Here is his story.

From Europe to the land down under
In the summer of 1995, Aleks received a call from a friend in Australia who was looking for “a tall strong player who can play in different positions.” So in September 1995, he left Europe for the first time.

En route to Melbourne, his flight stopped over in Singapore for a day. His first impression – “Oh my God, what an airport. Then I went outdoors and thought, oh my God, how hot is it here. It was the first time in my life I’ve seen Asian people.”

Despite initial homesickness, Aleks settled well into Melbourne and his new team South Melbourne Hellas, which was part of the Australian National Soccer League. “The training was very similar training, the coach was Hungarian so that helped. A lot of the team were from Croatia, Serbia and other places. So it felt a bit like home and helped me to adapt fast.”

A season in the Middle Kingdom
At the end of 1997, Aleks moved to FC Locomotive which was part of China’s Super League. “I had an English translator 24 hrs with me,” recalls Aleks, and there was also a lot of travelling within China. Not finding it to his liking, Aleks eventually moved back to an Australian team in Adelaide at the end of 1998.

It was during a one-week holiday in Melbourne that he was introduced to the woman who would later become his wife. Aleks remembers Natasha was friendly but that he “needed to remind her to talk slowly” because he wasn’t used to her Australian accent. Aleks also remembers their first conversation, an indication that Natasha was a real Aussie.

Natasha: “What do you do for a living?”
Aleks: “I’m a professional soccer player.”
Natasha: “Where do you play?”
Aleks: “I play in China but I’m coming back to Adelaide.”
Natasha: “Oh, do they play soccer here in Australia?”

“In Australia, there is only cricket and Aussie Rules. They are not used to a score of zero-zero. Not exciting.” When Natasha told her family that she had met a nice guy who was Serbian, they replied that “Serbians are bad. They change girlfriends all the time.”

“He said don’t go to Hong Kong. The city is a bit messy. Singapore is a better country. The league is quite good. I knew of Singapore as a business city. So my first response was, are you sure they play football in Singapore?”

“The league had already started and the team needed a striker just for the season. “They knew I was a left midfielder but decided to try me as a striker. So I got a job,” said Aleks.

The team finished third that season, on the back of a strong team that comprised players like Steven Tan and Lim Tong Hai, and coach Tohari Paijan. Tanjong Pagar United had other players lined up for the new season so Aleks returned to Australia and played left midfield for FC Marconi. In Jan 2000, he married Natasha.

In June 2000, Home United offered Aleks a position as striker and he accepted. “I have always been left back, left mid, left attack. I only started playing striker in Singapore.”

Inexperience proved no barrier and Aleks scored an impressive 13 goals that season. Under coach Robert Alberts, the team went on to win 1-0 in the final against arch-rivals SAF, to bring home the Singapore Cup. “It was a good feeling because it was a big crowd – 45,000 at National Stadium – and two uniformed teams so the rivalry was very intense. It was a must-win for both sides.”

But amid the jubilation came yet more tragedy.

In August 2000, Aleks’ brother, Milan, called to say that his 62-year-old father was dying of cancer and wanted to see him. For the first time in almost ten years, Aleks finally returned home.

His first day back, Aleks and his father talked for hours. The next day his father fell into a coma, and the day after, August 19, 2000, he died.

“I think he was waiting to see me before he died. We held hands,” remembers Aleks. “He died in his own home, the home he built.” 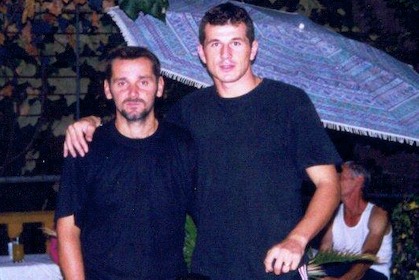 Aleks (right), with his older brother Milan who fought and survived the Bosnian War, when he went back for the first time in 10 years to see his dying father. (Photo Â© Aleksandar Duric)