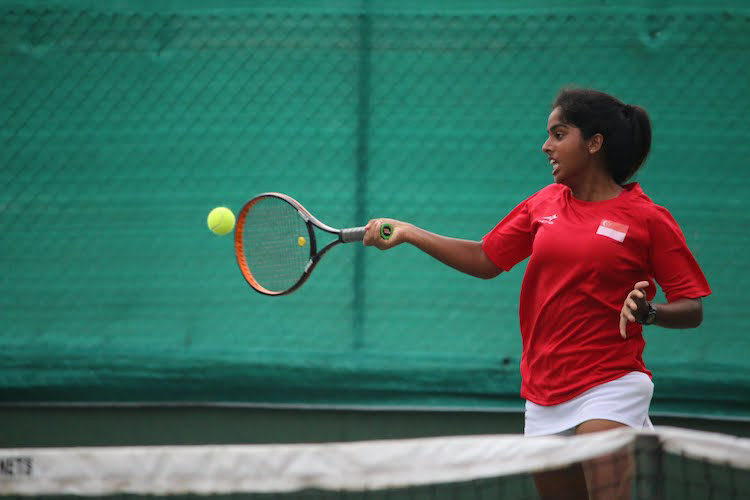 Colombo, Sri Lanka, Wednesday, April 4, 2018 — While the rest of Singapore teenagers took a break from school during the recent March school holiday, three girls battled it out on the tennis courts of Colombo, Sri Lanka, flying the Singapore flag and as it turned out, flying it high.

In a three-group format, Singapore had a flying start by beating Tajikistan 3-0 in their opening tie. The real test though, and probably the sign of things to come, was in the next tie when Singapore had to face perennial Southeast Asian powerhouse Philippines. Another 3-0 victory boosted the team’s confidence and belief and the win resulted in Singapore topping the group.

In the quarter-finals, the team again turned out victorious against Vietnam in the now familiar score line and continued in that form throughout the semi-finals against Mongolia – reaching the finals against host Sri Lanka having been unbeaten in all their matches.

Despite losing to Sri Lanka 2-1 in the finals, Team Singapore achieved automatic qualification to the Qualifying rounds to be played in Kuching, Malaysia in April 2018.

The unflappable team captain and coach, Nandu said: “I think the team was very balanced and fed off each other. Each victory by one player fed off to the rest of the team and they played with belief and purpose.”

“It was a great experience for them and they will need to up their game even further for the next rounds. It will be another fantastic week for the girls,” he added.

So after a week of waking up at 5.30am daily, getting to early training sessions followed by highly intense competition and then in true Singapore style squeezing in homework before lights out, the girls described the experience as “incredibly intense and yet great fun” as said by Joelle.

“What a week! A shame we have to go back so soon,” quipped Trisha.

Deanne, meanwhile, concluded saying: “We’re looking forward to next round! It’s going to be a blast!”

It was fun indeed. Next stop – Kuching.