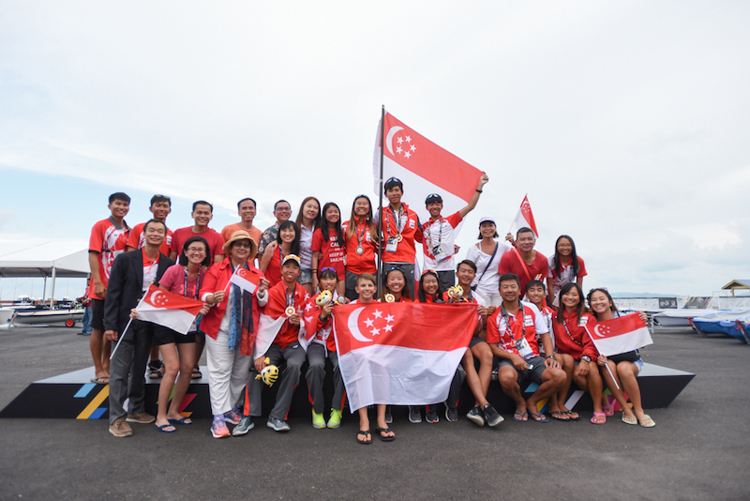 Kompleks Sukan Perahu Layar Kebangsaan Langkawi, August 27, 2017 — Singapore’s sailors came away with a gold, a silver and a bronze on Sunday at the 29th SEA Games in a strong performance which pointed to a bright future for the young team.

After Yukie Yokoyama and Cheryl Teo edged Malaysia for a thrilling gold in the 470 women’s event, teenagers Jodie Lai and Evangeline Tan took silver in the 420 girls’ event, and Wong Riji and Koh Yi Nian finished third in the 420 boys.

“We went into the final race with nothing to lose,” said Jodie. “We tried our best and did all we could.”

Jodie, a 2014 Asian Games gold-medallist in the optimist class, said the transition to a double-handed youth class was not easy.

“We learnt a lot from this race in terms of tactics, boat handling and the whole boat in total — and got a better understanding of the boat,” she said.

The day’s first event was arguably the most exciting, with 20-year-old Yukie combining with 17-year-old Cheryl to squeak past Malaysian pair Nuraisyah Jamil and Norashikin Sayed and win gold.

The Singaporean pair, who were ahead by just two points going into the final race, recovered from being five boat-lengths back to beat the Malaysians by less than a length.

In the 420 boys’ event, Riji and Yi Nian had to settle for bronze behind Malaysian winners Muhamad Uzair and Naquib Eiman, while Thailand’s Suthon Yampind and Nopphorn Booncherd took silver.

The final race was a battle for the silver medal position but Riji and Yi Nian were unable to pip the more experienced Thai duo.

“We didn’t really focus so much on the results, because we knew our competitors were strong,” said Yi Nian. “It’s actually quite a good result, but definitely things could have always been better.

“In this regatta, we really showed how far we have come from five months ago to be able to try and even contend for second place.”

The pair have been partners for more than one and a half years, but made the transition in class less than a year ago.

“It was actually not a long time to get into competitive standard,” said Riji. “The Malaysians for example have been sailing together for about three years now. They have a very big advantage in terms of experience.”

In the 470 men’s, Xavier Ng and Daniel Ian Toh finished in fourth spot. The event was won by Malaysia’s Muhamad Faizal and Ahmad Syukri.