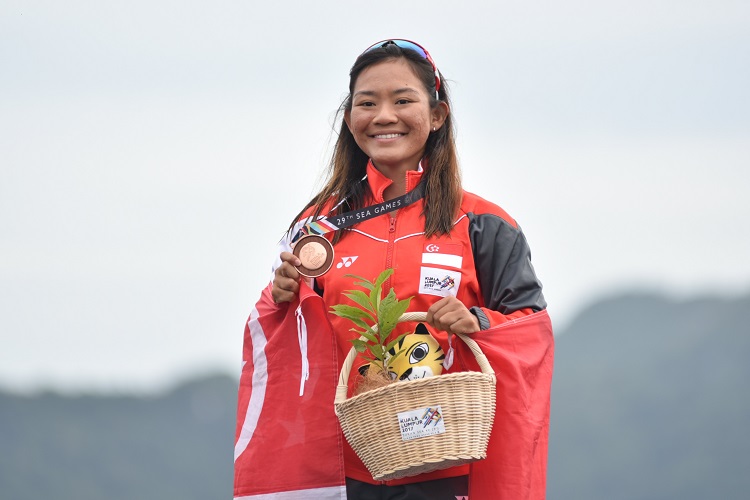 Nicole Lim celebrating her bronze medal for the Women’s Windsurfing RS:One category on the podium. (Photo 1 by Stefanus Ian/Sport Singapore

“I couldn’t sleep at all last night,” said Nicole. “I was waking up a few times because I was thinking ‘Tomorrow, what am I supposed to do?’

“You have to consider all the different scenarios, so that was what I was thinking about last night.”

But after she claimed bronze in the women’s Windsurfing RS: One at the 29th SEA Games on Monday, the 20-year-old will undoubtedly be getting some good shut-eye tonight.

Nicole finished second in the final race of her event, placing third overall ahead of Indonesia’s Syadine Arethusa.

Said Nicole: “I’m really very happy about it. Right now I’m just super-relieved because at the very start I wasn’t in any medal position.”

Three consecutive fifth-placed finishes in the second, third and fourth races meant that Nicole’s chances for a podium finish, her target going into the Games, were slim.

Despite being “super-stressed”, she refused to throw in the towel.

“I didn’t let the disappointment in,” said Nicole. “The people around me were very supportive, the team, the support staff and especially my coaches.

“They told me not to think too much, there are still many more races to come. Just work hard on the next few because what has been done cannot be undone.”

Going into the final race, the pressure was on as Nicole had to finish ahead of her rivals from Indonesia and Myanmar.

Yet she kept her nerve to lead the regatta for the majority of the race and was only pipped at the end by Geh.

“I was thinking that I could not let my guard down. There were many situations throughout the whole regatta where I was already in front but I lost out at the very end. So I was thinking that even if I was at the front, I would still have to work hard all the way,” said Nicole.

For more coverage of the 29th SEA Games, go to https://www.myactivesg.com/team-singapore/read.