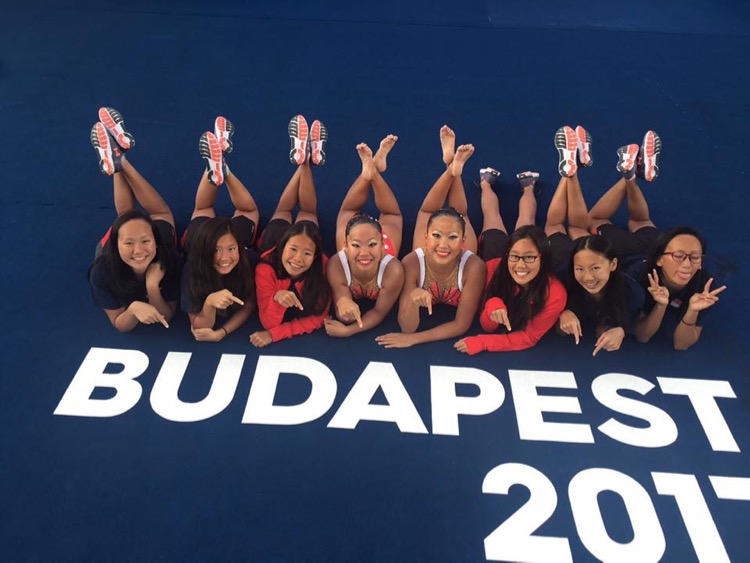 First up was captain Debbie Soh in the Solo Technical, where she finished 20th with a score of 72.9689. She finished 1.6306 points ahead of Malaysia’s Gan Hua Wei who finished 24th.

Soh was in action again in the Women’s Duet Technical where she and partner Mina Yong put up a strong showing, finishing 28th with a score of 74.7393. Malaysia’s duo of Gan Hua Wei and Lee Yhing Huey finished 31st with a score of 73.1753 while the Philippines took last place, 40th, with a 55.5266.

The girls continued their strong form in the Solo Free and Duet Free. Singapore’s Soh finished six places ahead of Malaysia’s Gan in the Women’s Solo free where she came away with a new personal best score of 75.6000 and a 21st place finishing. She and Yong went on to take the 28th placing in the Duet Free with a score of 76.0000. Malaysia came at 32nd place with a 73.7333.

Captain Debbie Soh hopes that their FINA World Championship showing will help at the KL SEA Games in August.

“Of course with it being a performance-based sport that is decided using scores from judges, there are chances for pre-judgement to occur in synchro. Defeating [Malaysia] by an impressive margin at this competition will help ensure a safer standing for us at the upcoming games,” said the 19-year-old.

Singapore also competed in the team technical and team free events, in which Malaysia did not participate. The team scored 73.6012 and 74.9000 to finish 19th and 20th in the technical and free events respectively.

Soh was happy with her team’s performance, citing their training camp as a big factor of their success at the World Championships.

“Our training camp in Canada was good because we gained exposure to a higher level of training, experienced different environments and learnt to adapt ourselves to whatever situation we were put in. Being overseas together as a team was also beneficial because I felt that it gave us the perfect platform to bond.”

With the conclusion of their campaign at the World Championships, the girls will next be looking to defend their titles at the SEA Games in KL this August.