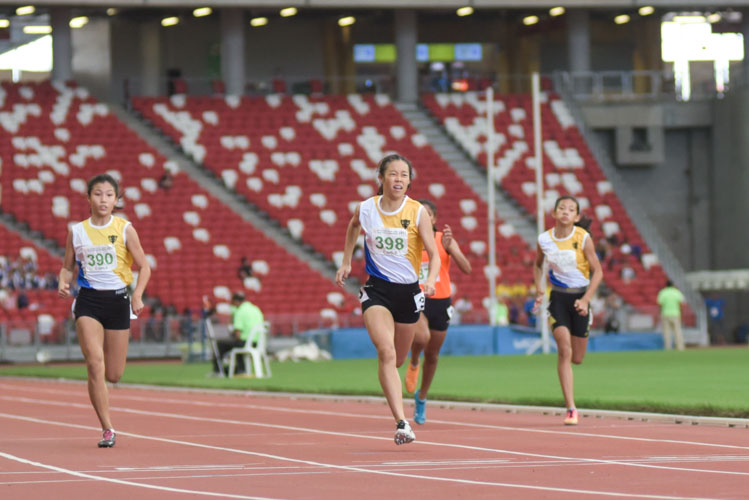 National Stadium, Friday, April 28, 2017 — As she stood over the starting block amid the cacophony of screams, Elizabeth-Ann Tan looked straight ahead, arms akimbo, focused on the task at hand. There were the nerves, but she was mostly visualising the century sprint she’s about to run: the start that was always problematic for her, her shoulders, her arm swing, her stride rhythm.

The time Elizabeth had in mind: the 12.44 seconds she ran at a meet in Perth in March. She ran 12.71s in the semi-finals last week to break the electronically timed C Division girls record of 12.74s that Nur Izlyn Bte Zaini set in 2012 while representing Singapore Sports School. To go anywhere near 12.44s would mean bettering the 12.6s hand-timed record set in 1993 by Lim Joo Lee, then of Raffles Girls’ School.

“I was very, very nervous,” said Elizabeth, a Nanyang Girls’ High School secondary two student. “It was a bit more difficult to focus here than at Bishan Stadium because of the bigger crowd and the place, it’s quite scary though the adrenaline also pushed me along.”

She ended up crossing the finish line in the C girls 100m final in 12.41s, run with a slight tailwind of 0.1 metre/second. Teammate Bernice Liew, who finished second in a close 200m final last week, again claimed the silver in a personal best 12.72s. Both girls later combined to win gold for Nanyang Girls’ in the 4 by 100m relay.

“Bernice was able to give her a push. She’s played a very big role,” said Tan Kim Seng, the veteran coach who’s been with Nanyang Girls’ since 2015 and even coached the current teacher-in-charge of the Nanyang Girls’ track team, ex-national runner Tan Yew Ling, when she was a student-athlete. “Elizabeth’s got a natural talent, she works hard and she absorbs ideas very easily.”

Elizabeth’s time not only wrecked Joo Lee’s 24-year-old record but also ranked her as the fastest 100-meter schoolgirl sprinter Friday, though A girls champion Tanisha Moghe of Raffles Institution had to contend with a strong headwind of 1.6m/s as she clocked 12.67s. B girls winner Raine Oh of the Sports School ran 12.67s with a tailwind of 0.8m/s.

It almost seemed like the winds had calmed down just for Elizabeth’s moment of glory.

The C girls race was the first of all the 100m races to be run and the winds picked up right after that. Reuben Rainer Lee of the Sports School completed a 100-200m double by winning his B boys 100m race in 11.21s against a 1m/s headwind. A boys winner Shahmee Ruzain ran 11.04s against a 1.3m/s headwind.

“I was so shocked, I didn’t expect this time,” said Elizabeth, who squealed in delight when her time flashed on the stadium screens.

Her time turned out also to be better than the eighth-placed finisher in the C boys final, that Sports School’s Jeft Tay won in 11.84s against a headwind of 1 m/s. Like Elizabeth, Jeft also completed a double in the flat sprint and the sprint hurdles event. Elizabeth earlier won the C girls 80m hurdles but failed to lower the record she set last year.

It’s easy to forget Elizabeth is just only 14 this year, with her work ethic and intense focus. But these qualities also co-exist with traits more commonly associated with a teenager – colourful dental braces, a girlish excitability outside of competition. The night before the 100m final, she was busy finishing up a video project for language arts class in school that was due the following day.

But on Friday, her competition started as soon as she was roused from sleep. At home with Mum, she watched videos documenting her past runs all morning to remind herself of things she has to do better as she visualised the 100m in all of its minutiae details over and over again.

In a measure of how much she could still yet improve, Shanti Pereira, the former Sports School student and the current defending South-east Asian Games 200m champion and national 100m and 200m record holder, posted 12.95s in the 100m as a 13-year-old, compared to Elizabeth’s 12.81s. As a 14-year-old, Shanti ran 12.68s compared to Elizabeth’s 12.41s.

“She likes competition,” said Cindy Yeo, for whom Elizabeth is third of her five children. “She thrives on it, the adrenaline drives her on.”