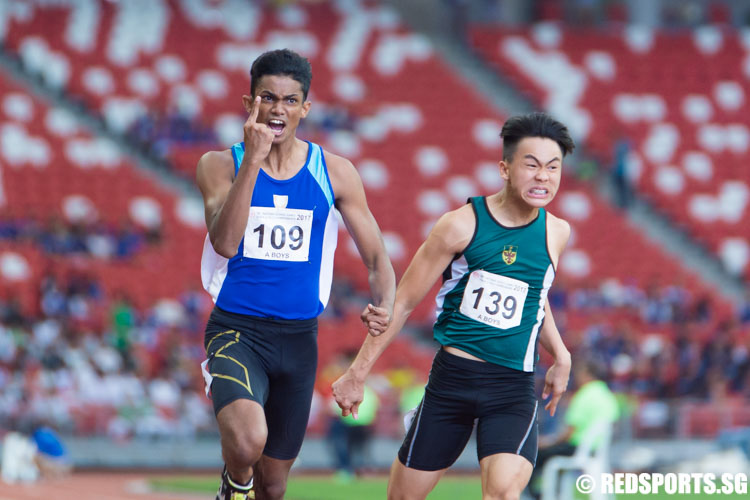 Shahmee Ruzain (#109) of Catholic Junior College celebrates as he crosses the finish line. He clinched the gold medal with a timing of 11.04s. (Photo 1 © Jerald Ang/Red Sports)

National Stadium, Friday, April 28, 2017 — He might be the defending sprint double champ from last year, but Catholic Junior College’s Shahmee Ruzain faced a formidable competitor in the form of Raffles Institution’s Joshua Chua at the 58th National Schools Track and Field Championships.

Four days earlier, Shahmee had retained his A Division boys’ 200 metres gold. But in facing Joshua in the century sprint, Shahmee had to take on the challenge of beating the B Division record holder who clocked 10.87 seconds last year.

And pass the test he did, as Shahmee roared home to gold in 11.04s against a headwind of 1.3 metres per second. Despite a better start, Joshua faded in the latter stages to finish second in 11.13s. Singapore Sports School’s Chong Wei Guan was third in 11.31s.

“I would say it was one of the most enjoyable 100 metres I’ve ever run,” Shahmee said. “It was very close, I could feel (Joshua) beside me, he could feel me beside him, we were just neck-and-neck all the way to the end. Only at the last part, I pulled slightly ahead of him. So it was one of my most enjoyable races and I’m thoroughly grateful that I won it.”

Acknowledging his slower start, he added, “Joshua has definitely always been a much faster starter than me. I feel that starts is the weakest part of my race, and it’s something I definitely have to work on if I want to improve further in track.”

While the 22.14s he clocked in the 200m final was a personal best, Shahmee’s 100m winning time falls short of his mark of 10.93s clocked at the ASEAN School Games last year.

“To be honest, I’m not too satisfied with my 100m timing,” he said. “That’s because I haven’t hit my PB again this year. So I guess it’s not the best season based on timings, but I’m really grateful for the medals this year.”

The last athlete to win the A boys’ 100m-200m sprint double for two years in a row was Raffles Junior College alumnus Jonah Tang, back in 2004-2005. And before Jonah, the previous athlete to do so was Hamkah Afik – whose daughter Haanee won silver in the B girls’ 100m – then of Chai Chee Secondary and the National Institute of Commerce, back in 1990-1991.

Meanwhile, Joshua insisted that he is happy to settle for silver, given he was nursing a hamstring injury as recently as last month.

“This year has been a tough season,” Joshua said. “I had many injuries coming into the season and missed many weeks of training. I honestly don’t feel too affected by the loss – I did the best I could under the circumstances and I’m proud of that.”

“Take nothing away from Shahmee though, he trained extremely hard and 100% deserved the gold. Ultimately the faster runner won the race and I’m glad for him.”

“I ran the race for God, my coach Mr Melvin Tan, my teammates and friends – to me, the results are secondary. This is just the start for me and I’m going to work even harder to improve myself,” added Joshua, who is competing at the 2nd Asian Youth Athletics Championships in Bangkok in three weeks’ time.

Both Shahmee and Joshua later ran the 4x100m relay for their respective schools – Shahmee on the second leg for CJC and Joshua the anchor for RI.

Shahmee’s teammate Hassan Khan fended off Joshua’s challenge on the last leg, earning a historic first boys’ relay gold for CJC in at least 38 years. CJC finished in 42.70s, 0.1 seconds ahead of RI.

The result meant that Shahmee walked home with three gold medals this year, capping off his short three-year schoolboy track career with an impressive tally of five golds and one silver.