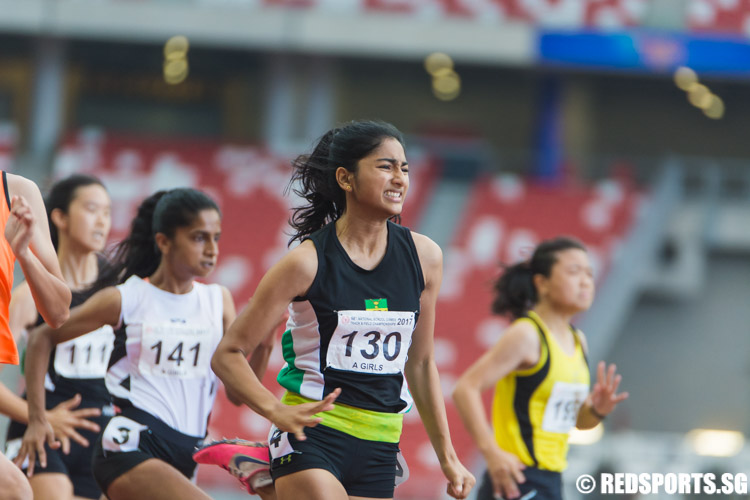 Tanisha Moghe (#130) of Raffles Institution competing in the A Division 100m sprint final. She clinched the gold medal with a timing of 12.67s. (Photo 1 © Jerald Ang/Red Sports)

National Stadium, Friday, April 28, 2017 — After missing out on the 200 metres gold four days earlier, Raffles Institution’s Tanisha Moghe had redemption on her mind when she took to the blocks in the A Division girls’ 100m final at the 58th National Schools Track and Field Championships.

She was up against the same competitors – Singapore Sports School’s Ismi Zakiah, who edged her out in the 200m final, and RI teammate Amirah Aljunied, who was the defending champion in this event.

This time round, Tanisha eventually dipped 0.05 seconds ahead of Ismi, running 12.67s against a strong headwind of 1.6 metres per second. Teammate Amirah finished third again in 12.96s.

This is Tanisha’s second 100m gold in a row at the national schools championships, adding to her B Division triumph last year where she clocked a personal best 12.63s.

However, the former Cedar Girls’ student admitted her lack of satisfaction with the result.

“It wasn’t the best,” she said. “I was quite disappointed looking at the timing because it wasn’t a PB. But I guess I’ll just have to train harder for next year.”

Coached by Melvin Tan, Tanisha said she hopes to break her personal bests in both sprint events by next year. She also has her sights set on the electronically-timed A Division girls’ 100m record of 12.37s, set by Anglo-Chinese Junior College alumnus Tan Shieh Li in 1999.

“I would want to break the record,” she said. “I was actually aiming for the record this year, but now I’ll aim for it next year. So I’ll just have to train very hard for it. As for the 200m, I’m aiming to do a PB as well.”

Under the National Stadium roof on Friday, the fastest schoolgirl over 100 metres turned out to be C Division winner Elizabeth-Ann Tan of Nanyang Girls’ High, who blazed the track in a new championship record of 12.41s.

Tanisha had nice words for the secondary two girl, saying, “(Elizabeth-Ann) is extremely talented. I heard that she trains very hard, so she really deserves it.”

Later in the afternoon, Tanisha teamed up with Amirah, Nicole Hu and Clenyce Tan in the 4x100m relay, anchoring RI to gold in 49.60s.

She also ran the third leg for RI in the 4x400m relay, for which they earned a bronze.