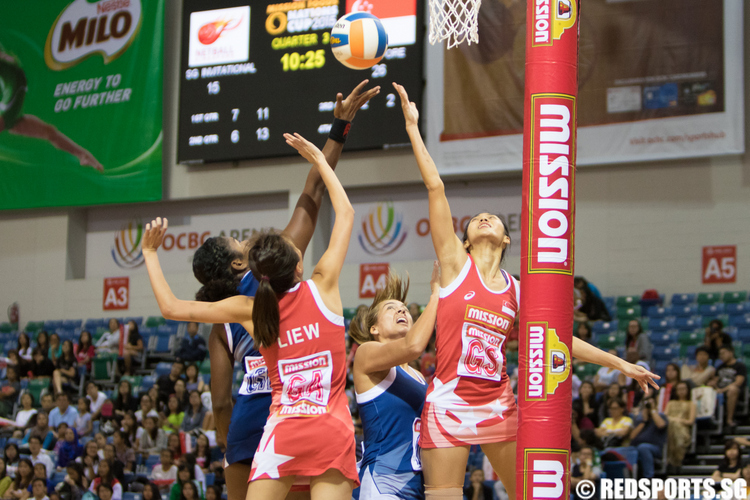 OCBC Arena, Friday, December 18, 2015 — Singapore won Singapore Invitational 44–32 in the last round-robin game. This leaves Singapore with their final game against Botswana, which would determine whether Singapore manages a podium finish in the Netball Nations Cup 2015.

The first half saw Singapore capitalising on fast attacks and several long passes to lead the scoring. On the other hand, Singapore Invitational was unable to convert their chances and had relatively low shooting accuracy. Singapore led 24-13 going into the half-time break.

The second half saw Singapore Invitational working on their attacks and they managed several good turnovers as they tried to narrow the score. In the final quarter, Singapore’s shooters Charmaine Soh and Yasmin Ho were on point with 100 per cent accuracy. Hence Singapore managed to widen the lead to eventually seal the victory, 44–32.

Tomorrow’s game will be a rematch of Wednesday’s match, where Singapore went down 38–46 to Botswana. “We are expecting it to be a really tight game so we have to be strong both mentally and physically to be able to take that,” commented Singapore’s captain Micky Lin.

Singapore’s coach Ruth Aitken added, “We know we have to play our best to give ourselves a chance. We have been working hard this week, to get our game plan right and I look forward to a big finish tomorrow.”

On today’s game, Micky said, “The main objective of the game today is to clean up some of the stuff that we have done in the previous games. Today’s game was cleaner and the flow was better so hopefully we can bring these into the game tomorrow.”

“There were a lot of ups and downs (throughout this journey) and at this point it is about what we have in front of us and being able to approach it positively,” added Micky.

Singapore will be facing Botswana tomorrow, December 19, at 2pm. They will be playing at the OCBC Arena.