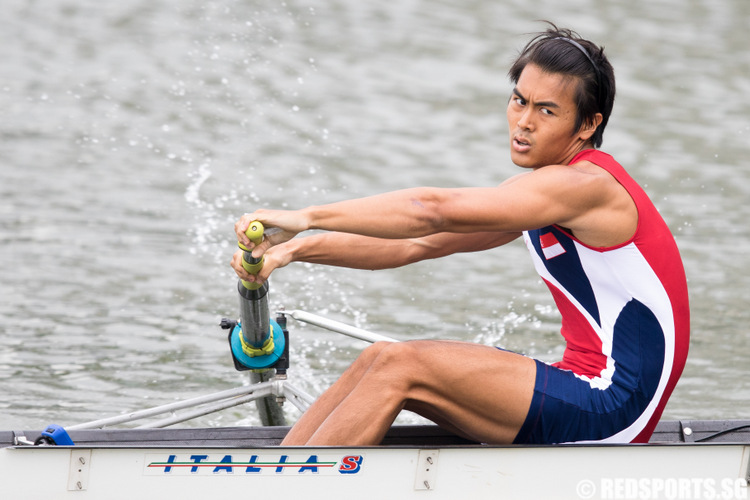 Marina Channel, Sunday, June 14, 2015 — Singapore bagged one silver and two bronze medals on the last day of the Southeast Asian (SEA) Games rowing tournament to bring their total to four medals. Earlier, Sayidah Aisyah had won a bronze medal for her performance in the Women’s Lightweight Single 500m race on Thursday, and was looking to increase her own haul.

In the 1000m race on the last day of the rowing tournament, Sayidah was in third position behind the Thai and Indonesian rowers at the 500m mark, and held on through the last 500m to bag another bronze with a timing of 3 minutes 59.01 seconds.

Similarly, Singapore’s duo of Joan Poh and Joanna Chan outlasted their opponents in the Women’s Pair 1000m race to clinch bronze with a timing of 3:48.18.

The Women’s Lightweight Four 1000m saw the hosts finish in fifth position with a timing of 3:45.14, 22.44s behind the winners from Vietnam.

In the Men’s Lightweight Four 1000m race, Singapore’s team of Syahir Ezekiel, Nadzrie Hyckell, Pek Hong Kiat and Lee Zong Han trailed early in the race, but eventually overtook Vietnam and Myanmar in the final stretch to finish 1.35s ahead of Vietnam for silver. They clocked a timing of 3:05.25, 2.97s behind the winners from Indonesia.

Chen Mingxiang came in sixth in the Men’s Lightweight Single 1000. He finished in a time of 3:50.84, 17.71 seconds behind Vietnamese Nguyen Van Linh, who took home the gold.

In the Men’s Pair 1000m, the team from Singapore came in sixth, 21.10 seconds behind gold medallists Indonesia. And in the last race of the day, the hosts finished fourth in the Men’s Eights 1000m race. They clocked 3:09.42 to finish 18.45s behind the Indonesians.

Rowing medallists Aisyah and Syahir are siblings, and on their SEA Games experience, Syahir said, “I’m really proud to be in the same Games as her and it’s a dream come true to be winning medals with her, alongside her, and it’s emotional as well to know that the Rafa’ee siblings can finally shine for the family. And I’m very proud of her also for winning the bronze medal. I know she can do better, but I think she’s already done her best.”