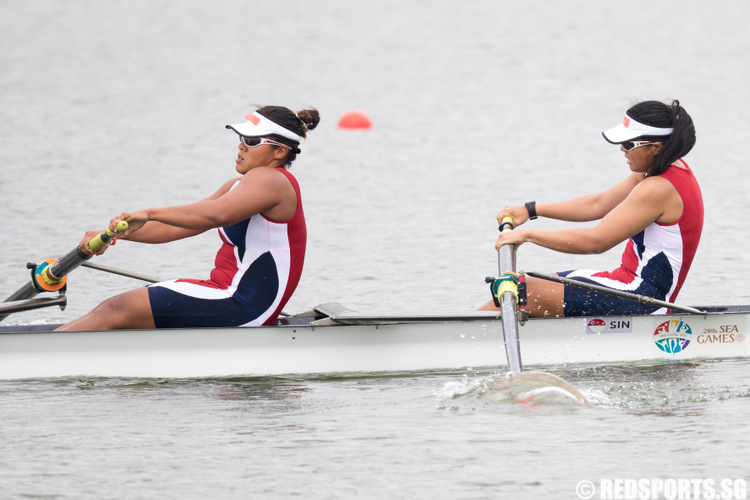 The duo of Joan Poh and Joanna Chan in action during the Women’s Pair 1000m. (Photo 1 © Clara Yuan/Red Sports)

At the 500-metre mark, the team from Indonesia crossed first, 1.24 seconds ahead. Meanwhile, the pair from Singapore were in third, 3.76s behind the Indonesians.

In the final stretch, the Vietnamese overtook the Indonesians to win gold by 0.07 seconds. Singapore held on to their third place from the 500m-mark to take bronze in 3 minutes 48.18 seconds.

“I think we stuck to our race plan and we executed the race the way we expected ourselves to, so it went pretty well,” said Joan. “This is my first time racing in rowing and I’ve only been in the sport for six months. It’s a really good experience, an eye-opener, and it really sparks off this passion in me for the sport. I’ve done a couple of sports at the national level before rowing, but I think I might just stay on in rowing.”

“It’s a pity that sports like us, rowing, dragonboat, canoeing, kayaking, and sailing, we’re not getting as much media exposure as the rest of the other sports. Because we’re an outdoor sport, so the coverage is not as extensive. I think that rowing is a very very good sport. It’s very dynamic, and it encompasses teamwork and a lot of endurance,” commented Joan.

“I think it’s because it’s not an official CCA recognised by CCAB, there’s not a community or pool of talents that we can tap on. I’m glad that despite all these, I still managed to get a podium finish which was what we set out to achieve.”

Joanna said, “Our first 500-metre race was a bit of a problem because it happened so quickly, but we stuck to it and we knew that we’ve done this during trainings. We’ve done everything that we could, and all our trainings were for this moment, so just going out there, rowing our best, rowing our hardest, and finishing well was what kept us going.”

“We were aiming for a podium finish and as for medal colour, I told her (Joan) last night that we will just aim for the highest. As far as we can go, as long as we row our best, I think we will get what we deserve to get,” added Joanna.