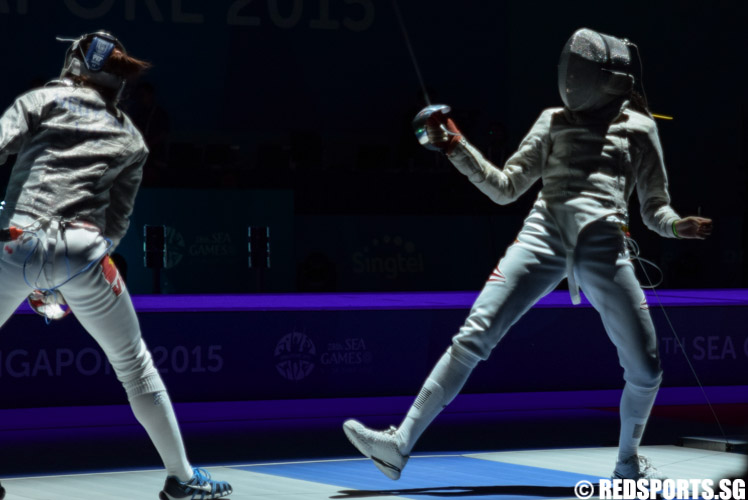 Singapore settled for the bronze medal after going down 36–45 to Vietnam in a close match today at the OCBC Arena Hall 2. (Photo 1 © Laura Lee/Red Sports)

The semi-final started with Singapore’s Ann Lee closing the first match behind Vietnam by four points (1–5). In the next match, outstanding play by Ywen Lau stole the lead from Vietnam as the Singaporean scored nine touches and limited opponent Nguyen Thi Thuy Chung to only four.

However, the advantage for the Singaporeans did not last for long as they trailed the Vietnamese once again with a score of 15–11 at the end of the third bout.

The subsequent two matches saw the lead change hands twice. While the Singaporeans lagged behind Vietnam by a slim margin of two to three points in the sixth and seventh match, the penultimate bout saw the latter pull away to a substantial lead of eight points (40–32). Hence, the semi-final concluded with the 45–36 victory to the Vietnamese.

Joining the hosts as bronze medalists are Indonesia, who went down to Thailand 38–45 in their semi-final.