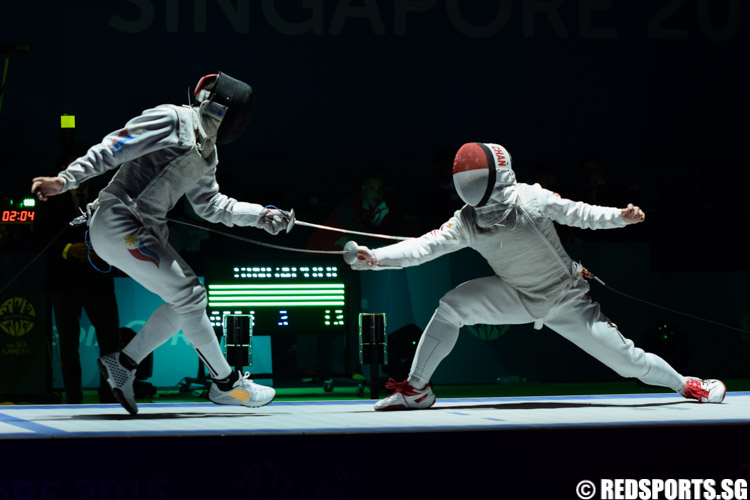 OCBC Arena, Sunday, June 7, 2015 – On the last day of fencing competition at the 28th South East Asian (SEA) Games, Singapore won gold in the men’s team foil event, beating a strong Philippines side 45–40 in the final.

This was Singapore’s first-ever gold medal in any men’s foil event. It also meant double gold for Singapore in the team foil events after the female fencers won the gold medal yesterday.

The foil team, consisting of Kevin Jerrold Chan, Joshua Ian Lim, Tan Yuan Zi and substitute Justin Ong, were pushed to their limits in the final by their opponents as the match went down to the last bout. Eventually, anchor fencer Joshua overcame a comeback by the Filipinos to claim the gold medal for his side.

“We are very happy about the win as we prepared very hard for it for the past year,” said Tan Yuan Zi.

“We had to juggle our various commitments to prepare for this competition and we are really happy our hard work paid off. We knew we had a shot at the gold medal but the match was very close. I’m proud that my team and I made it to the end to clinch the gold medal,” added Yuan Zi.

Earlier in the day, Singapore beat Cambodia 45–12 in the quarter-finals before overcoming Indonesia 45–21 in the semi-final.

The final was a tight one throughout as very few points separated each contest in the 9-bout match. Singapore were able to edge ahead early on but Philippines stormed back, narrowing the gap and eventually drawing level at 28–28.

Kevin scored two points to maintain Singapore’s lead before coming back two bouts later to extend Singapore’s lead to 40–33. Nathaniel Perez of the Philippines kept things interesting by scoring seven points. However, Joshua ensured the gold medal was safe in the home team’s pocket by wrapping up the match.

“I was focusing on the game plan on how to eventually gain a point,” described Joshua. “Even if there was a slight comeback, I realise this would be the way to win the gold medal. I was not focusing on Philippines’ points.”

For men’s foil head coach Simon Senft, he was pleased with his charges’ performance.

“We had good preparation for this competition,” said the German. “I didn’t really expect to win, but I really hoped we would win it. I knew we had about 80 or 90 percent chance of winning this competition and I’m really proud that we did it.”

“I am glad that everyone in the Singapore fencing team managed to take home a medal.”