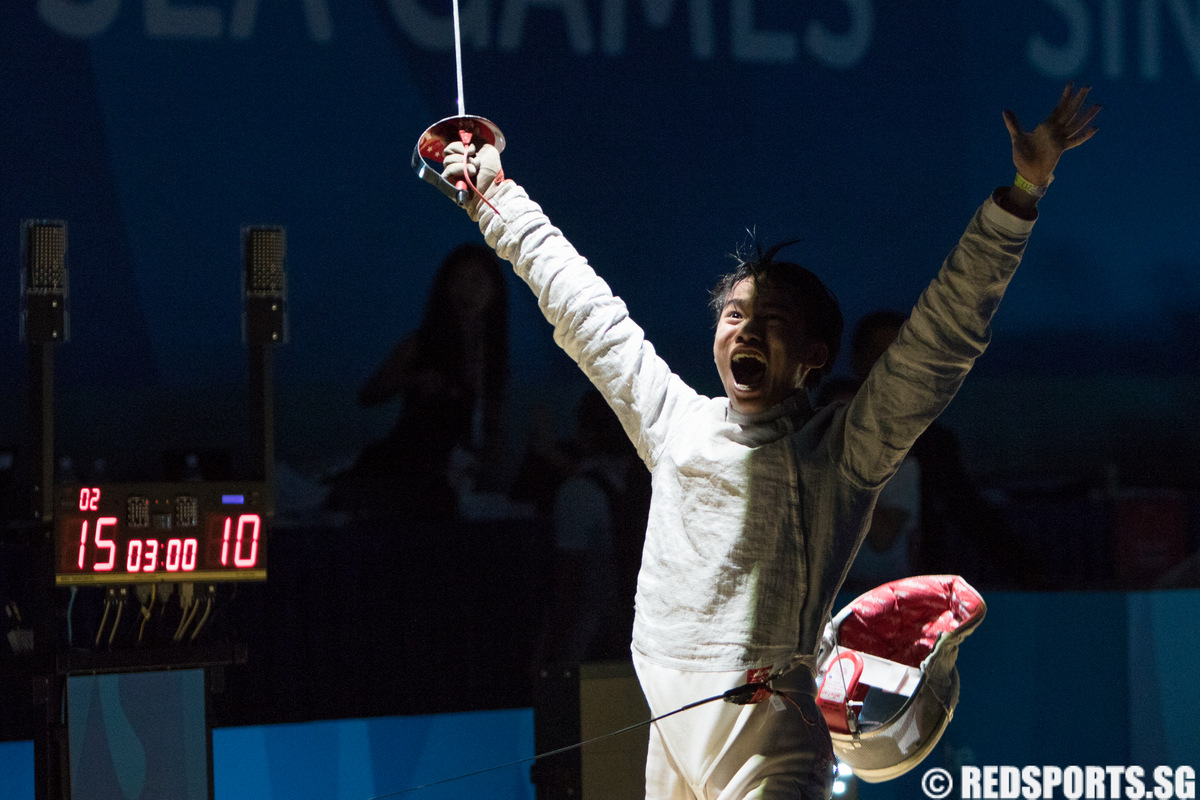 OCBC Arena, Wednesday, June 3, 2015 — Singapore’s Choy Yu Yong was unable to cap his run of three consecutive wins when he suffered a 11–15 loss against Vietnam’s Vu Thanh An in the final of the Men’s Individual Sabre event at the 28th Southeast Asian (SEA) Games fencing competition. The result handed the Singaporean a silver medal in his maiden outing at the competition.

Choy defeated Indonesia’s Ricky Dhisullimah 15-12 in the round-of-16 match, and was up against Vietnam’s Nguyen Xuan Loi in the quarter-finals. Despite trailing by two points at the start of the match, he quickly gained momentum and showed his dominance in attack later on in the bout. Choy finished with a 15–10 victory and qualified for the semi-final.

The semi-final saw Choy lead by five points midway through his bout. Although Kothny Wiradech of Thailand narrowed the deficit soon after, Choy kept his composure and eventually won 15–12 to advance to the final.

In the gold medal match, both Choy and opponent Vu were evenly-matched, as the scored was tied four times in the first half of the bout. However, Vu’s tactical moves subsequently locked down Choy who was unable to get on the scoreboard, while Vu strung together four consecutive points. Thus, Choy lost out in the crucial moments of the match and was defeated 11–15, taking home the silver instead.

“I was first disappointed that I lost but now I’m feeling great because I came in second which was really unexpected of me,” said Choy about the result. “I fought my hardest and I made it here. I was fighting all the way in the last bout even up to the final point. I was even leading 8–7 at the half-point break against a stronger opponent like Vu.”

“After the break, my opponent sort of figured me out and I was slow to react to his change of fencing style. That cost me the match. He was trying to force me and constantly stop me from attacking by putting me on defense which is worse for me especially in sabre fencing,” added Choy. “He was very good. I fenced him before last year and he was the top-seeded fencer in this competition so I think I put up a good fight.”

This marks the 18-year-old student’s debut at the SEA Games this year. “It’s a big stage for me. I felt a bit of pressure but I changed this bit into power and managed to fight my way all the way to the finals,” he said. “I’ll be sure to work harder and maybe get gold in the next SEA Games.”

“It’s tough to balance but my friends and teachers have been helping me out,” explained Choy, who is currently in his second year at Hwa Chong Institution. “After this SEA Games and the upcoming Asian Fencing Championships, I’ll be taking a rest from fencing to focus on my A Levels before coming back to perform.”

Despite the break, Choy looks forward to the Rio Olympics next year. “If I manage to qualify I’ll definitely submit a deferment letter for National Service and try my best to get into the Olympics.”

Choy will next participate in the Men’s Team Sabre event on Saturday, June 6 from 3.00 pm onwards at the OCBC Arena.

‘We won’t be the top-seeded team but we’ll definitely try our hardest to beat the other teams on the way and get the best result we can.”