Rugby: when we wore no sports boots 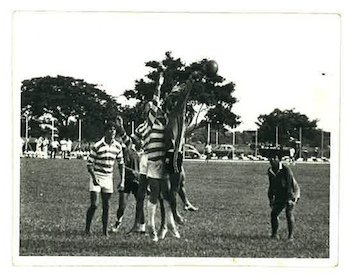 Wong Chai Kee of Raffles out-jumped a St John’s player during a line-out in this photo from 1969. Raffles colours were apple green jerseys and black shorts. St John’s colours were similar to the Scottish football club, Celtic. We did not wear boots. Beyond the fence is Nicoll Highway and the future National Stadium. (Photo 1 courtesy of Peter Chan)

Prior to 1969, players who were under 16 years of age wore no boots when they represented their schools in competitive rugby and football. This seems strange when we see kids today as young as 7 wearing branded sports attires.

What was it like to run bare-footed? Was it painful for the big toe when you kicked the ball without boots? Somehow we conquered all pains.

One rugby tournament that I recall playing without boots was the Junior 7-A-Side which was held at the People’s Association Sports Field in Kallang. The sports field had one major characteristic — plenty of weeds and “Touch me not” Mimosas. It was certainly not fun running bare-footed over “Touch me not”.

The preliminary matches were played in the morning, starting at 8am. However the semi-finals and finals were played at the unearthly hour of 3pm. That day, we missed our afternoon school session. The schedule was selected because there were no flood lights and there was a need to accommodate the senior (17 years and above) and junior (below 16 years) competitions. As a result the final ended in semi-darkness.

The crowd size was small because the afternoon school session students were not allowed to leave school. Only those faithful to the game turned up.

It was at the People’s Association Sports Field that Singapore schools first heard of St John’s Comprehensive School, a school for the education of British kids whose fathers were working for the British military. Other than its name, nobody knew where this school was located and this would be the first time many local school players would came face to face with “Kwei-lo”. They were taller and bigger sized.

We were told their physique was due to the consumption of beef and potatoes whereas we consumed rice and chay kway teow. Today things are better — many school rugby kids are just as big as their British contemporaries due to better diet.

Looking back to that game against St John’s in March 1969, Raffles had met them in the semi-finals. In the other semi-final, St Andrew’s School met Dunearn Technical. In 1969 we were 15 years of age but the St John’s players looked as if they were young adults. The games were played on a knock-out basis and each school was allowed to field two 7-A-Side teams.

I was a member of the B Team which was actually the Raffles ”A –list” for tactical reasons. The other team members were Ho Lin Meng, Wong Chai Kee, Tan Geok Ser, Tay Eng Kiat, Lim Kim Nguan, Cheong Wai Hin, and me as the winger. We knocked out Victoria School, Sang Nila Utama, Whitley Secondary School and Queenstown Technical by comfortable margins. Unfortunately, the other Raffles A team was knocked out by the St Andrew’s B team in the second round.

The other day I had a conversation with John Rubery, the former St John’s hooker. John is now a sculptor by profession. John remembered playing against MacPherson Secondary School and Tanglin Integrated School. After knocking out St Joseph’s Institution in the quarter-finals, St John’s triumphantly walked off the field thinking they were already in the final until their dreams were shattered by their teacher-in-charge who told them they were to meet Raffles in the semi-finals, the team they feared most in this competition.

During a recent reunion, some of my former team-mates touched on the game against St John’s. The sore point was about the referee. The referee was the teacher-in-charge of St Andrew’s School (Photo 4), the other semi-finalist. There was no neutral referee, probably because many Singapore schools at that time did not have qualified rugby coaches and teachers often doubled-up as referees***.

Many penalties were awarded against us but little against St John’s. As a result, it became so ridiculous that St John’s was attacking and Raffles were defending for most of the time. Mr. Puhendrien, our sports teacher, had his arms up in the air but there was little he could do.

The game against St John’s was not incident-free. In order to stop the bigger physique St John’s players from advancing, we had to resort to two players tackling one St John’s player – one went for the upper abdomen, the other for the legs. Because of this, punches were often exchanged.

At half-time there was no score and in the second-half both teams went all out. It looked like the match was heading into extra time until Higden, the burly St John’s centre-half received a ball from a loose scrum in front of the goal-post and dived through a mass of players to score the only try. With the conversion, St John beat Raffles 5-0.

St John’s marched into the final and met St Andrew’s School. St Andrew’s School won 13-8. Some of the Saints players were Sng Eng Seng, George Thomas, Wong Chin Tung, Ng Kok Cher and Leow Kim Suan. The winners and losing finalists received their medals. I asked John whether he kept his silver medal. He told me it was placed inside a fully articulated model of him made in fiberglass and resin. The same sculpture was later cannibalised by his then girlfriend — perhaps recycled is a better word — as the head in her own sculpture.

In 1970, the rules changed — lower secondary students were allowed to wear boots. I paid $15 for my pair of Puma boots from Champion Sports Shop at Bras Basah Road. There were only two brands of boots at that time — Puma and adidas.

Since schools in those days had no policy of subsidizing the purchase of boots, we relied on three installments to complete the purchase. Even the black school shorts we wore cost $2 and another dollar went to Mr. Arasu who sewed the school crest on it. Only the rugby jersey was on loan but had to be washed and returned after the season was over. And the next time we faced another “Kwei-Lo” school, it was the Singapore American School.

Though we were poorly dressed, there was fun in the competitive sport. Would today’s young students dare play bare-footed?

*** There was Mr. Seet Khoon Hiong of Dunearn Technical School and Bro. Sylvester of Saint Joseph Institution who doubled-up as referees. 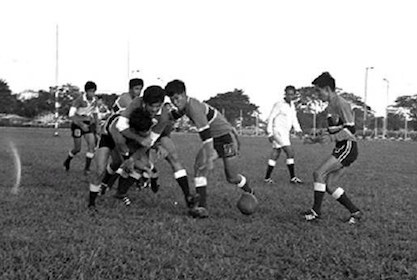 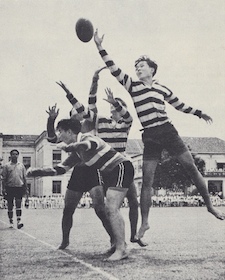 In this 1968 photo, on the left is Mr. Dhillion, the neutral referee for the final between Raffles and St. Andrew’s School at Bras Basah Road. The players were bare-footed. (Photo 3 courtesy of Peter Chan) 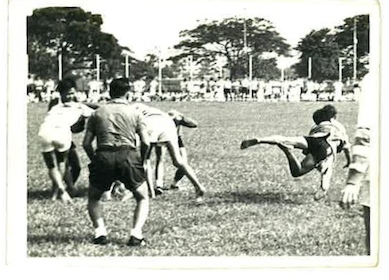