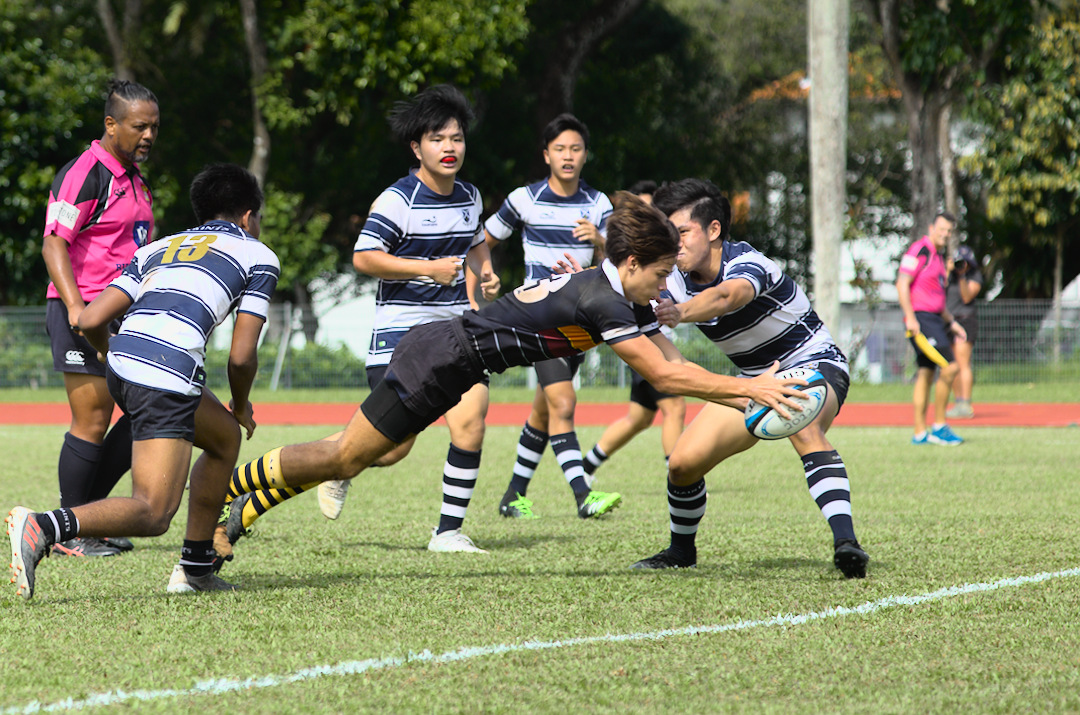 ACJC overwhelmed Saints 29-0 and 31-0 in the two matches, with Danyl Tan (#30), Ryan Erwin Bin Abdul Halim (#15) Lee Ji Quan (#21) and Daniel John Graves (#23) each scoring two tries apiece. The two tries helped Daniel, who is only in his second year as a rugby player, to end this season as ACJC’s top try scorer.

“I know (the tries) are all back because of my team,” said Daniel. “They set up all the plays for me, and they really carried me and supported me throughout.”

Daniel, as with most — if not all — players in this year’s NSG rugby competition, was just glad they were even able to compete at all this year. The competition was suspended the last two years due to the Covid-19 pandemic, and even with its return this year, there were many changes from its usual 15-a-side rugby union format.

While not uncommon for schools to participate in rugby Sevens tournaments, this is the first time that the sevens rules have been used for the NSG. Every school registered two teams, each with up to 15 players. The first team would play a match of 7-minute halves against the first team of the opposing school, then another set of players played against each other in the second match. The school with the higher aggregate points would win.

“A lot of us have spent a lot of nights thinking about how we wanted to come back,” said ACJC’s Tyler Ng (#6). “To get the opportunity to come back to the field and actually do it, and actually put what we’ve trained for into practice, it’s really a dream come true.” 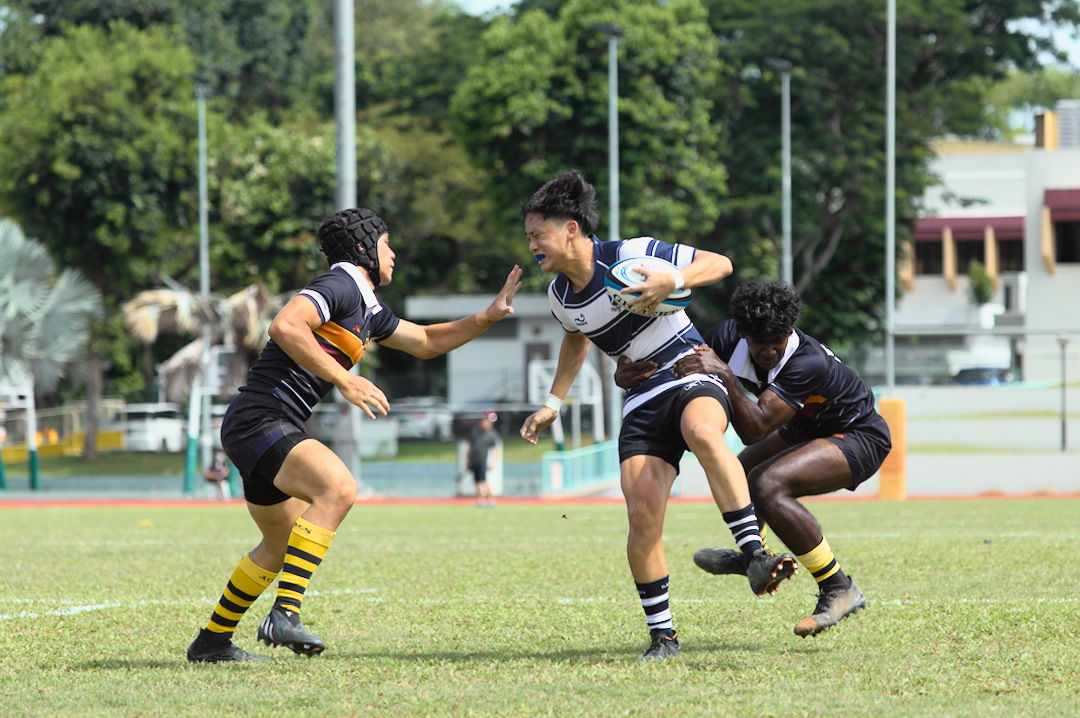 ACJC’s Ryan Erwin Bin Abdul Halim (#15) kicked off proceedings for the afternoon, and also gave away the first penalty of the afternoon, tackling the Saints carrier high. SAJC took the lineout option, and the second contact of the game was another high tackle by ACJC. Early momentum was with Saint Andrews as Ethan Chen (#16) kicked them into the AC half, and their attack off the lineout brought them into the 22 before before they gave away a penalty.

ACJC kicked for touch, but the throw into their lineout was not straight and possession went back to Saint Andrews. The ball was spread wide from the scrum to the other end of the field, but the Saints were contained by a solid drift defence from ACJC, led by Ramanathan Annamalai (#11). Ramanathan dragged down his opposite number Darius Ang Jing Kai on a run for the corner, before getting up again to make a strong tackle on another Saints attacker 5 seconds later, causing him to knock on. ACJC capitalised immediately and passed the ball through the hands to Danyl Tan (#30), who still had work to do, fending off 2 SAJC players and running 80 meters to score. His try was converted by Alldan Chan (#28) to make the score 7-0 to ACJC.

The rest of the first half was messy, with the ball changing hands several times. SAJC knocked on the ball from the AC kickoff, but ACJC was then penalised for holding on to the ball at the ruck. Ramanathan continued to show a fantastic defensive work rate, making a tackle behind the gainline on Saints’ Ian Lee (#7), and then, two phases later, reading a pass and rushing out of the defensive line to smash Ethan, who knocked the ball on. ACJC were unable this time to take advantage of the turnover created by Ramanathan, knocking the ball on from the resulting scrum and ending the half.

Kicking off the second half, Saints’ Ian made a terrible error, banana kicking the ball back behind the halfway line. His teammate Dylan Yim (#12) was unable to clean up, and Danyl pounced on the unfortunate bounce of the ball to score the try for ACJC. Alldan kicked the ball wide to the left of the posts, and the score remained 12-0.

Saints knocked the ball on at the next restart, and ACJC began to play. Some nice passing between Alldan and teammate Aiden Khoo (#10) brought ACJC up to the 5 meter line before Alldan knocked on. Saints were under pressure to retain the ball and clear their lines, but ACJC was too strong for them, kicking the ball back to their side. Ryan, playing the scrum-half role for AC, picked the ball up to score. Alldan once again failed to convert.

The game continued and SAJC played a few phases in their own half before clearing the ball, giving ACJC possession just inside their half. Ramanathan, who beyond defensive work also had several chances to stretch his legs and scorch defenders, attempted to kick and chase off the lineout. The #11 was unable to regather and knocked on, but the Saints found themselves in the exact same position – literally and game-wise – as they had been one try ago. Their tiring forwards were again overpowered in the scrum, and Ryan was able to jog in under the posts. Alldan converted this time to make it a 24-0 game.

Ryan then restarted the game with a well-placed kick, forcing Saints #18 Zachary Thiruman to catch it just next to the touchline. The ball hung long enough in the air for AC’s Emilio Huang (#14) to then tackle Zachary out of bounds, injuring him in the process. Quick thinking from Emilio saw him take the quick throw before the rest of the SA defence could set, passing to teammate Declan Kho (#7), who offloaded in a tackle to Anthony Ng (#3). The prop completed the simple 2-on-1 with the final defender by passing back to Emilio, who scored under the posts. Alldan missed the conversion, and Match 1 ended 29-0. 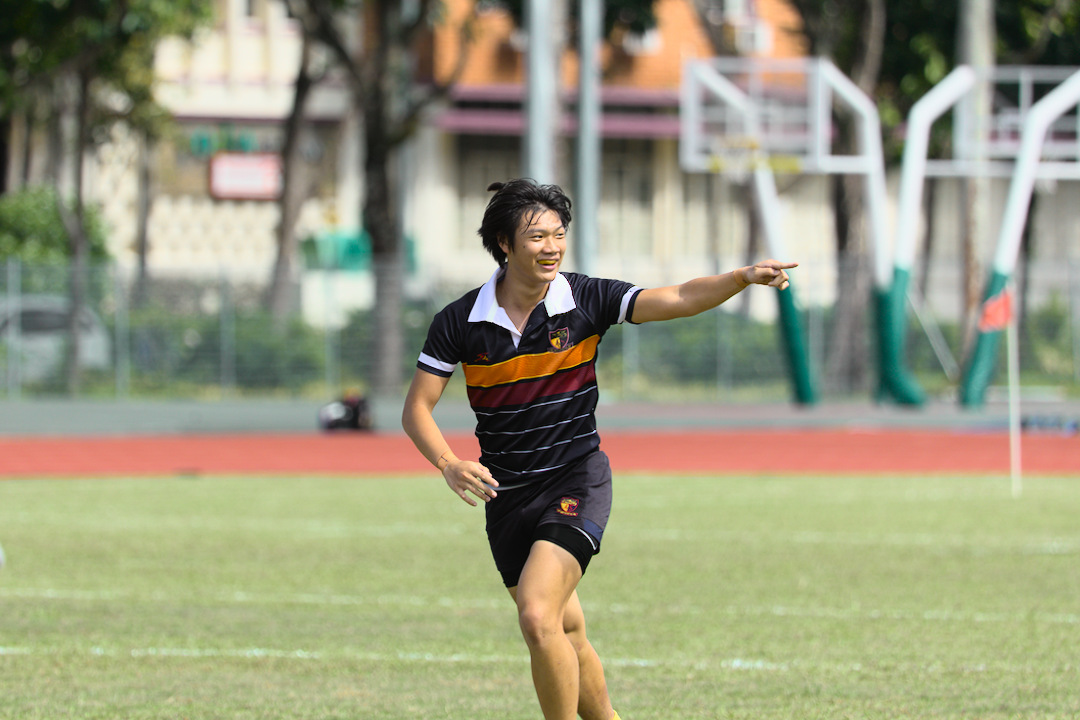 Tyler Ng acknowledges the cheering supporters in the stands as he runs back to his half. (Photo 3 © Shenn Tan/Red Sports)

Poor basics and scrummaging continued to let Saints down in Match 2. ACJC’s Jaylen Ang (#22) kicked off the match, and AC were able to win the ball back right off the bat, Aidan Toh (#17) recovering the ball in the SA ruck. Play from both sides was messy – ACJC looked to keep up the pace of their attack, but their offloads didn’t always go to hand. Meanwhile, the Saints’ defence was scrambling because one of their men stayed down due to a head knock. Eventually, Tyler Ng (#6) broke through the line and stepped inside the final Saints defender to score. Muhammad Elyas Amir Bin Suhardi (#2) attempted the conversion, but missed.

With a kick similar to teammate Ryan Erwin in the 1st match, Jaylen caused the Saints catcher to step out after catching the ball. ACJC again took the quick throw, and Elyas charged into the blue and white defence. One of the Saints was pinged for not rolling away after the tackle, and the AC #2, who was taking the kicks to touch for his team, accidentally kicked the ball dead instead. Saints were rewarded with a scrum at the place of the penalty kick, and attempted to further relieve pressure on themselves by booting the ball downfield into their opponents’ 22. Unfortunately for them, AC’s Daniel John Graves (#23) got to the ball first, skipping around the chasing Saints player and then running 70 meters to score. Elyas missed the conversion, and the score remained 10-0.

From the AC kickoff, the Saints player carried the ball into contact and knocked it on, once again turning possession back over to ACJC. It was short lived; SA intercepted the ball after a few phases, and eventually earned a penalty for an AC player failing to roll away. Saints’ Jared Khuan (#8) was able to reach the halfway line with his kick, but Elyas made an athletic attempt to jump and knock the ball back into play, avoiding the SA lineout. Unfortunately, he knocked the ball on, and Saints received a scrum on the 50m line. AC’s forwards kept up the efforts of their Match 1 teammates, and pushed Saints backwards in the scrum to win back the ball. They then received their own scrum, after a SA player failed an interception attempt, and they marauded up the field before earning a penalty 15 metres from the try line due to another SA player diving in the ruck.

Jaylen took the quick tap from the penalty and took it in, teammate Lee Ji Quan (#21) securing the ruck. Daniel demonstrated good awareness to spot the absence of Saints defenders immediately around the ruck, picking and going to score. Ji Quan, this time, stepped up to convert, but also missed, ending the first half 15-0.

SAJC kicked off the second half. Jaylen received the ball and found Tyler, who made a spirited run down the right side. The #6 led by example all game, carrying dynamically and showing great spirit in both attack and defence. Tyler shrugged off several defenders and then offloaded to a teammate on the 40 metre line. Following behind their match captain, ACJC refused to let up the attacking pressure, and players kept the ball alive by popping the ball up after going to ground, or releasing after the tackle and then picking it up themselves to go again. The first ruck of the half was only formed a meter short of the try line, and once more a scrambling Saints defence failed to cover the pillar and post positions on either side of it. AC’s Ji Quan took a gap on the left, diving over to score. Jaylen took over the kicking duties but continued the miss streak, making the score 20-0.

Ji Quan was taking the kickoffs now, and erred by kicking the ball out. ACJC then gave away another penalty for not rolling, resulting in a Saints lineout on their 22. AC’s Muhammad Waseem Akram Amanullah (#18) was able to win back the ball, though, using his height to get in front of the Saints jumper despite not being lifted to compete. SAJC were then pinged for a high tackle as they attempted to bring him down. Ji Quan shaped to kick for touch, and then took the quick tap, showing both surprising strength and the weariness of his opponents by sitting down two of them as they rushed up to tackle him.

Eager to put more points on the board, a series of offloads took place once more as ACJC stormed into the Saints 22. The final pass from Darryl Soo (#27) to Owen Tjiptarahardja (#16) was deemed forward, and possession was handed back to the Saints. Unfortunately for them, this possession came in the form of a scrum, and once again they were pushed back by the AC forwards, who took the ball back. Lee ran between two defenders to score next to the posts, and Elyas, back to taking the kicks, pulled it to the left. The score was 25-0 and 54-0 on aggregate.

ACJC had no mercy for St Andrew’s in spite of the crushing scoreline. Ji Quan spotted the entire SA team standing further back for the kickoff, and exploited the gap up front by shooting a soft grubber kick up to the 40m line, regathering the ball before any exhausted and discouraged SA players could. ACJC made their way into the 22, and the Saints were spared further defending when Owen knocked on in an attempt to release and pick the ball back up. This time, SA were able to win their own scrum, and made a final attempt to attack, bringing the ball just beyond the #22 before knocking on to end the game.

For the J2s, this match was the last that they will play as schoolboys. Daniel also had words for someone who, like him 2 years ago, might be looking to try out rugby for the first time: “I think rugby is not as scary as you think, and is a lot more fun than you think. Just give it a shot, I think you might fall in love with it.”