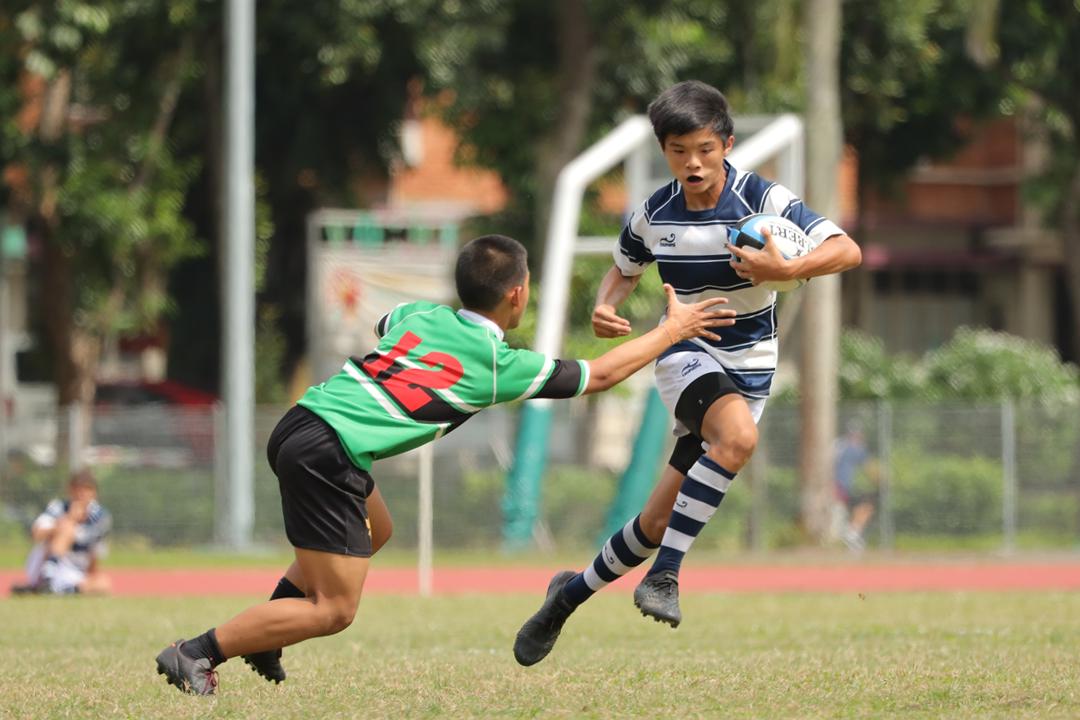 MOE (Evans) Stadium, Friday, August 19, 2022 — A free-flowing, back-and-forth affair between St. Andrew’s Secondary and Raffles Institution in the C Division rugby semi-finals saw the Saints run away with the game after half-time to win 36-12. Both schools sent down student contingents to support their schoolmates, and the cheers and beating of drums brought an atmosphere worthy of a final.

The Saints put the first points on the scoreboard through scrum-half Travis Goh (#10). Standoff Tan Kai Wen, wearing the #7 jersey on his back, failed to convert, and the score was 5-0. Raffles evened affairs with a five-pointer from Garrett Chua (#14). Starting in his own 22, the fullback swerved to the right, outpacing his opposing defenders, and then cut back towards the left corner to avoid the covering fullback and score from a spectacular 80-metre run.

Despite missing the difficult conversion, the fullback’s stunning run roused supporters and teammates alike. RI were able to hold out against the Saints, only conceding one more try in the first half through a smart quick tap from Travis. This time, Kai Wen was able to convert, and the score was 12-5.

Raffles did not fold, and hit back with a try from Iain Chong Chow (#12). Chaw Sheng (#15) stepped up to kick and succeeded in his conversion, making the score 12-12 going into half-time.

On-field captain Aden Chong Chow was happy with his team’s performance, despite the loss. Compared to their previous match against the same opponents, in which they lost heavily, he explained that his team performed better this time round. He said: “I could sense that our fire and passion were certainly there and I’m extremely proud of what my team managed to achieve despite the outcome today.”

The Saints traditionally lean on a strong forward pack to gain forward momentum, and this C Div team is no different. Notable carries came from Lloyd Ong (#30), who combined his large frame with surprising acceleration to reliably make metres for the blue and white.

The Raffles defense compressed to handle him and his fellow forwards, but were then stretched by a Saints backline which was calmly and steadily spreading the ball out wide. As the second half carried on, tiring green and black jerseys began to be outrun and brushed off by Saints backs, who were enjoying more space on the outside.

Both sides made initial forays into each other’s halves, and later only Saints were able to turn their opportunities into points. Tries from Eldric The (#21), Afiq bin Muhammad (#20) and Gareth Koh (#16), as well as a conversion from Kai Wen, put them far ahead of their opponents, who had no reply.

The game ended with a Saints player once again finding space on the wing, making a 60-metre run downfield before being dragged down by a chasing Garrett. Unfortunately, the Raffles fullback pulled his opponent down by grabbing his shoulders, and it was judged to be a high tackle. Having been so close to the tryline, a penalty try was awarded, and the game ended 36-12.

Looking ahead to the final against Anglo-Chinese School (Independent), Saints captain Khow Jyun Zhen (#11) called on his team to play more confidently. “In the first game against ACS(I) we were pretty worried, we were pretty scared,” he admitted. “But I hope that the next time we play against them we will have more confidence in ourselves.”

*The team sheet did not display some players’ full names. If you know their full names, do leave a comment below.