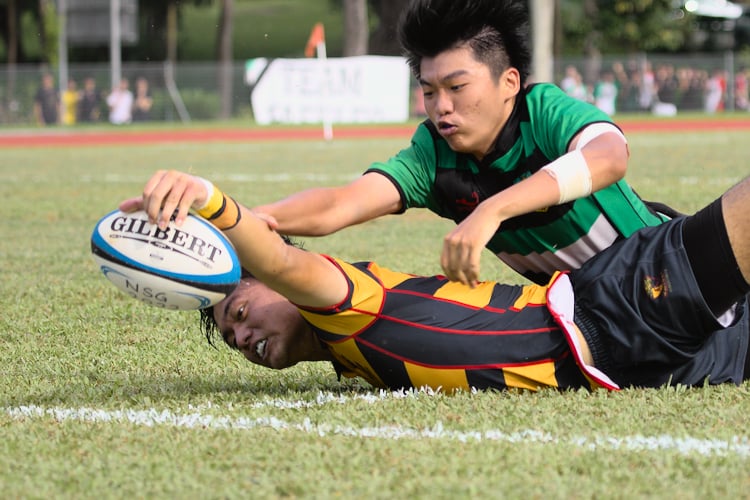 ACS(I)’s Eric Chi reaches for the try-line to score the closing try for ACS(I), after fending off the Raffles defenders. (Photo 1 © Shenn Tan/Red Sports)

MOE (Evans) Stadium, Friday, May 6, 2022 — In a heart-stopping final, Anglo-Chinese School (Independent) defeated Raffles Institution by a single try across two 14-minute-long matches, as the final whistle blew to a 29-24 aggregate score. Independent thus retained the A Division title for the seventh consecutive season, as spectators returned in full force to the rugby National School Games (NSG) final – the first time since 2019.

In the first match, ACS(I) took a narrow lead of 17-12, before holding Raffles’ offensive off with a 12-12 draw in the second match.

Due to the prevailing Covid-19 situation, unlike the usual 15-a-side rugby union matches, this season’s matches were played 7-a-side, with every school fielding two teams of 15 registered players each. The first team would play a match of 7-minute halves against the first team of the opposing school, while another set of players played against each other in the second match. The winning school team was the one with the higher aggregate points total.

Before the start of this A Division season, this graduating cohort of ACS(I) ruggers last competed in the NSG two years ago.

Independent captain Lim Jinyi (#2) did not think his team would have the opportunity to play in the NSG again, saying: “In 2020, we got to play one match against Saints [immediately before the Covid situation]. We joked about it afterwards saying that was our final already, and we won in our hearts.”

“I really missed being on the field with the crowd cheering,” remarked Lim wistfully.

Lim’s wish would indeed come true, as the further easing of Covid-19 measures brought the resumption of NSG as well as the return of match supporters, just in time for the final.

“With the safe-management measures relaxed, it’s really wonderful that the entire school can come together – not just as a time to watch the sport, but to rally around each other,” said Mr Arene Koh, principal of ACS(I).

“It was a gallant effort [by the organisers] to get this 7s… getting it done, fighting the weather, and allowing in the crowd today – I think it was a bonus,” added Adrian Chong, head coach of Independent.

Harkened by the rapturous cheers from supporters of the clashing rugby powerhouses, the match kicked-off.

It was ACS(I) that first put points on the board with a try by Jeffrey Lee (#10). Independent had first gained possession in that play when Braydon Yu (#13) intercepted the ball from the Raffles back-line. From there, ACS(I) kept driving successive phases through centre-field. Lee then waited for an opportune moment to strike, out-manoeuvring the last man in the Raffles defence. An unsuccessful conversion meant Independent was up by only five points.

Building on the momentum, Independent added a further seven points to their tally. Tycen Yeoh (#26) carried the ball from the 22, giving the assist to Yu metres from the Raffles try-line. Yu broke through the RI defence and grounded the ball at the foot of the posts. The try was then successfully converted by Yeoh.

Raffles responded with their first try of the match when Independent gave away a penalty in their own 5 metres. Raffles took the penalty tap and swung the ball through their line. With the Raffles men on the open outnumbering the opposing Independent defence, a slick pass from Patrick Seow (#9) saw Kyler Teh (#4) run a hard line to score. The score rose to 12-7 following a successful conversion by Tristan Ang (#10).

The second half of Match 1 opened with ACS(I)’s rebuttal. Jeremiah Williams (#16) picked the ball from a ruck, then exploited a gap in the Raffles defence to score a try in centre field. Independent failed to convert, leaving the score at 17-5.

Originally given a yellow card for a tip-tackle, Raffles’ Teh was expelled from play after the referee deemed that he had deliberately stamped on the leg of the ACS(I) ball carrier, admonishing Teh further with a red card. With one man down, Raffles had to work doubly hard to hope to close the points gap.

In the last play of Match 1, a free kick in Raffles’ favour saw Tyler Leong (#25) take the tap and power into the Independent winger. Leong barrelled through and outflanked the covering tackler to convincingly ground the ball to score. With an unsuccessful conversion by RI, Match 1 ended with the score at 17-12.

“The result, I suppose, was much tighter than the first game, when we played [Raffles],” said Chong, head coach of ACS(I). In the previous group stage match against RI, the ACSians had won comfortably by 48-14 (15-14, 33-0). Chong further remarked: “Credit to Raffles, I think they really fought hard and really narrowed the gap.”

The second match saw even tighter contestation by the fresh sides, with no points scored throughout the first half of this match, save for seven points added in Independent’s favour in the final second.

In the last play before half-time, scrumhalf Bryant Sim (#6) picked the ball from a scrum in Independent’s favour, and ran towards the open side, eluding the grasp of his Raffles counterpart. Sim shot a pass to Gareth Mok (#12), who linked the ball up to Eric Chi (#15). Chi powered past the gain line, goose-stepped, and then offloaded the ball backwards, NFL-style, to Jacob Tan (#20). Tan then burned the remaining 10 metres and slid into goal to score. The conversion taken by Sim sailed between the uprights, bringing the score to 24-12.

Raffles returned with a 40-metre run on the left wing by Jerome Wee (#17), with Wee grounding the ball confidently between the posts. A successful conversion by Dhanasekeran Janaardhanaprabu (#21) closed the gap to 24-19.

However, Independent scored yet again when the massively-built Chi shrugged off tacklers to stretch out and ground the ball on the Raffles try line. As Chi’s try remained unconverted, the score of 29-19 put ACS(I) 10 points ahead with one minute to go.

“This year we have pushed ourselves and we’ve come so far, I am really proud of all our performances,” said Raffles captain Patrick Seow (#9).

An opportunity was presented to Raffles when Independent found themselves one-man down, as ACS(I)’s Sim was sin-binned for obstruction of play.

Raffles scrum-half Janaardhanaprabu scored off a scrum, five metres away from the Independent try line, closing in on Independent’s lead with 29-24.

However, time ran short for Raffles, as Independent’s Marcus Tay (#7) kicked the ball dead to end the match. The ACS(I) team rushed the field to celebrate their seventh straight A Division championship, to the thundering cheers of their supporters.

“It was really such an amazing experience being able to come back here and finish up our year with a victory”, ACS(I) captain Lim said in closing.