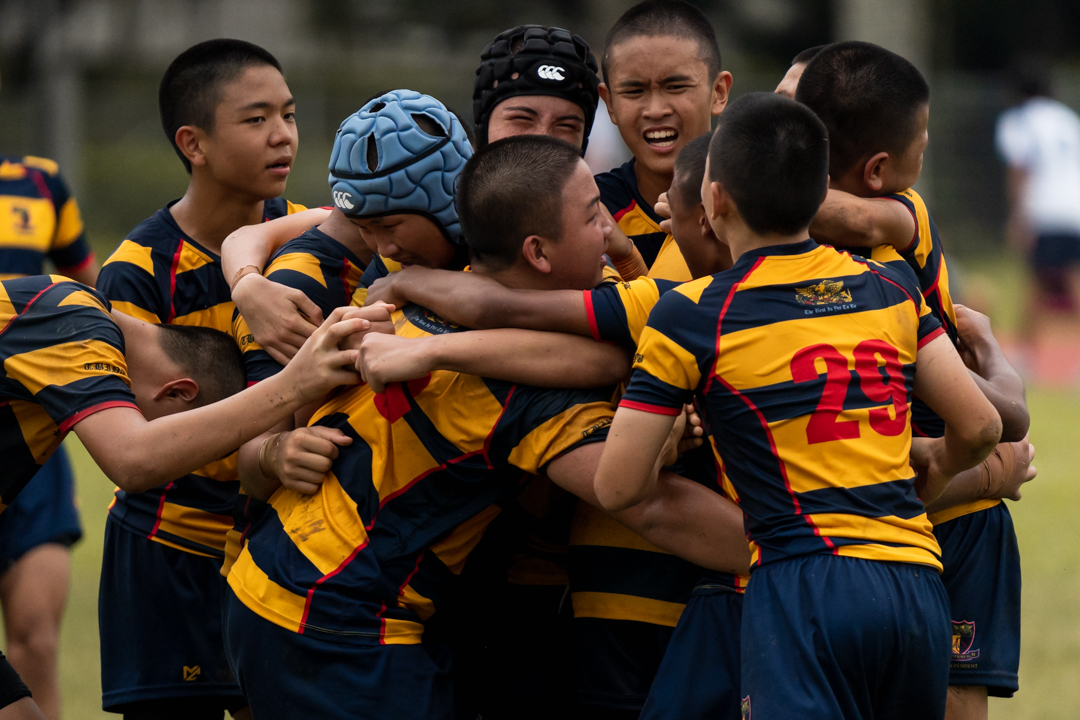 MOE (Evans) Stadium, Thursday, August 25, 2022 — Decisive early tries by Anglo-Chinese School (Independent) helped the boys from Dover Road secure a 24-5 victory in the C Division final over perennial rivals St. Andrew’s Secondary School. This was the first rugby 15s final to be played at the National School Games since 2019.

With the win, ACS(I) complete the grand slam for 2022, having won both the A and B Division titles earlier in the year. Independent also extend their winning streak in the C Division to five consecutive championships since 2016, with the tournament brought to a hiatus in 2020 and 2021 due to the Covid-19 situation.

Although ultimately coming away with the win, these past few months were not always smooth sailing for ACS(I).

Prior to the start of the C Division matches, starting back Tyler Law (AC #13) was ruled out for the season after sustaining an injury. “Tyler would have been a pivotal member of the team as he can play multiple positions,” said Adrian Chong, head coach of ACS(I).

“The whole team was devastated, we all really wanted to win it for him,” added fellow back Harry Curran (AC #15).

In response, many ACS(I) players could be seen with Tyler’s handwritten name emblazoned across their support taping. “It means a lot watching my teammates on the field with my name on their hands,” said Tyler.

Heading into the final, ACS(I) were the favourites. Independent had topped the table in the group stage games, and conceded only two tries across five matches played.

Just before kick-off, the Saints haka was notably heard for the first time since the last C Division final in 2019.

As the match begun, the Independent boys were quick to strike, scoring within the first minute after having won the ball back from their own kick-off.

As ACS(I) sucked the Saint’s defence in on the far left, the ball returned to the open side by the fourth phase and Iestyn John (AC #29) blazed from the 22 to mere metres away from the St. Andrew’s try line. A short flick from John to fullback Curran (AC #15) on the outside brought the first try home for ACS(I).

The conversion taken by Jaryl Lee (AC #10) sailed between the uprights, bringing the scores to 7-0 in favour of Independent.

ACS(I)’s use of an attacking structure comprising 3-men ‘pods’ was instrumental to their success in the final and throughout the season.

Captain Jeremiah Lee (AC #12) said: “We trusted our game plan, we trusted the process, no matter what happened we stuck to our plan.”

Opportunity came knocking for Saints when ACS(I) gave away a succession of penalties. Saints’ Tan Kai Wen (SA #7) took the two penalty kicks, but the ball unfortunately fell short of the posts both times.

“Unfortunately, (Saints) did not put in the two penalties that were given to them, I suppose that gave us the impetus to continue moving forward at every chance we had,” said Mr Chong.

ACS(I) replied with two tries in quick succession from their forwards.

In the eighth minute, second row Erick Tio (AC #19) side-stepped an overly eager St. Andrew’s tackler off a ruck, then slipped through the crack left in the defence line to score. While prop Ames Leung (AC #1) received the ball off a penalty tap to fight through no less than four Saints tacklers, eventually forcing himself over the line to ground the ball in the 13th minute.

Both tries were successfully converted by Curran, taking the score to 21-0.

With three minutes to go in the first half, Independent were awarded a penalty 30 metres from the posts. Curran attempted a penalty kick for the three points. The ball, however, hit the cross bar on its way down and landed into the arms of the Saints.

As the clock wound down for the first half, St. Andrew’s were unable to capitalise on the possession.

The boys in white and blue had all to play for in the final, with their 52-10 group-stage loss to ACS(I) fresh on their minds.

“The match was tough, but I think everyone tried their best,” said St. Andrew’s captain Khow Jyun Zhen (SA #11). “In the first half we weren’t really confident in ourselves… but in the second half we got better, we grew more confident, and I think we played our best.”

Indeed, the second half was marked by a more dominant Saints offensive, coupled with greater possession. The Saints, in fact, outscored ACS(I) in the second half adding five points to Independent’s three.

“Good job to St. Andrew’s… (in the second half) our defence was really tested for a prolonged period of time,” said Lee (AC #12).

Despite this, ACS(I) were once again able to effectively capitalise on any scoring opportunities presented to them. With Curran redeeming his earlier miss with a successful penalty kick, the score rose to 24-0.

Curran had been a key player for Independent this season. With his lethal kicking accuracy and speed, by the close of the season Curran had scored a total of 11 tries and taken 27 successful conversions for his team.

“With me doing track and rugby… I am able to show my speed, that’s why I like to use my kicking game in rugby, because I know the players are not as fast,” said Curran, who won three gold medals at the National Schools Track and Field Championships earlier this year.

With 15 minutes remaining in the final, the Saints finally managed to put points onto the board. St. Andrew’s patience was rewarded with a try by Lloyd Ong (SA #30), following a flurry of successive ‘pick-and-go’ phases. The try would remain unconverted, and the full-time whistle was blown to a final score of 24-5.

“I think it was special that we managed to hold onto the grand slam that we last won in 2019, before the Covid situation,” said Mr Chong.

As for Tyler Law, he said although it did hurt to only be able to watch his teammates play in the final, the centre has his eye on his return to the sport, saying: “I didn’t get to play this year, but I (hope) to be back.”

Coach Chong is also looking ahead to the 2023 season. “I believe next year is going to be very challenging, with all the teams gearing up for it, and having enough time to prepare for the B, A, and C Divisions next year,” he said.

“I strongly believe it would not be easy… it is going to be (a contest between) a few schools really good enough to get the titles.”